Back to Parent Page
HomeQ&AWhat Happens at The Synapse? 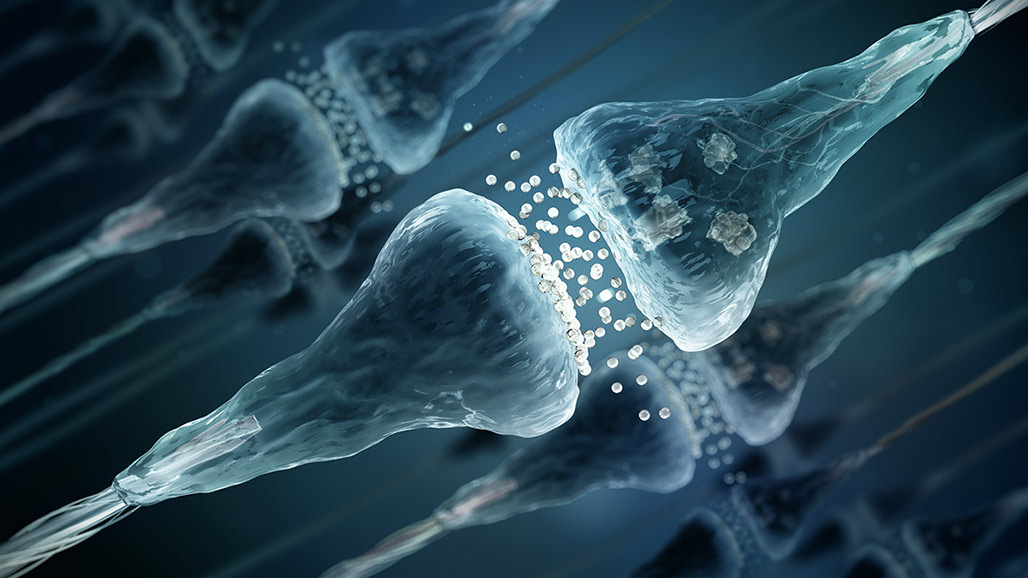 The brain is responsible for every thought, feeling, and action. But how do the billions of cells that reside in the brain manage these feats?

They do so through a process called neurotransmission. Simply stated, neurotransmission is the way that brain cells communicate. And the bulk of those communications occur at a site called the synapse. Neuroscientists now understand that the synapse plays a critical role in a variety of cognitive processes—especially those involved with learning and memory.

What is a synapse?

The word synapse stems from the Greek words “syn” (together) and “haptein” (to clasp). This might make you think that a synapse is where brain cells touch or fasten together, but that isn’t quite right. The synapse, rather, is that small pocket of space between two cells, where they can pass messages to communicate. A single neuron may contain thousands of synapses. In fact, one type of neuron called the Purkinje cell, found in the brain’s cerebellum, may have as many as one hundred thousand synapses.

How big is a synapse?

Synapses are tiny—you cannot see them with the naked eye. When measured using sophisticated tools, scientists can see that the small gaps between cells is approximately 20-40 nanometers wide. If you consider that the thickness of a single sheet of paper is about 100,000 nanometers wide, you can start to understand just how small these functional contact points between neurons really are. More than 3,000 synapses would fit in that space alone! 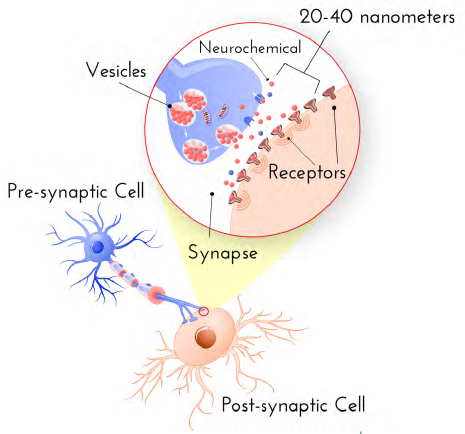 How many synapses are in the human brain?

The short answer is that neuroscientists aren’t exactly sure. It’s very hard to measure in living human beings. But current post-mortem studies, where scientists examine the brains of deceased individuals, suggest that the average male human brain contains about 86 billion neurons. If each neuron is home to hundreds or even thousands of synapses, the estimated number of these communication points must be in the trillions.

What is synaptic transmission?

Generally speaking, it’s just another way to say neurotransmission. But it specifies that the communication occurring between brain cells is happening at the synapse as opposed to some other communication point. One neuron, often referred to as the pre-synaptic cell, will release a neurotransmitter or other neurochemical from special pouches clustered near the cell membrane called synaptic vesicles into the space between cells. Those molecules will then be taken up by membrane receptors on the post-synaptic, or neighboring, cell. When this message is passed between the two cells at the synapse, it has the power to change the behavior of both cells. Chemicals from the pre-synaptic neuron may excite the post-synaptic cell, telling it to release its own neurochemicals. It may tell the post-synaptic cell to slow down signaling or stop it all together. Or it may simply tell it to change the message a bit. But synapses offer the possibility of bi-directional communication. As such, post-synaptic cells can send back their own messages to pre-synaptic cells—telling them to change how much or how often a neurotransmitter is released.

Are there different kinds of synapses?

Yes! Synapses can vary in size, structure, and shape. And they can be found at different sites on a neuron. For example, there may be synapses between the axon of one cell and the dendrite of another, called axodendritic synapses. They can go from the axon to the cell body, or soma-that’s an axosomatic synapse. Or they may go between two axons. That’s an axoaxonic synapse.

There is also a special type of electrical synapse called a gap junction. They are smaller than traditional chemical synapses (only about 1-4 nanometers in width), and conduct electrical impulses between cells in a bi­directional fashion. Gap junctions come into play when neural circuits need to make quick and immediate responses.

While gap junctions don’t come up often in everyday neuroscience conversation, scientists now understand that they play an important role in the creation, maintenance, and strengthening of neural circuits. Some hypothesize gap junctions can “boost” neural signaling, helping to make sure signals will move far and wide across the cortex.

What is synaptic plasticity?

Synaptic plasticity is just a change of strength. Once upon a time, neuroscientists believed that all synapses were fixed-they worked at the same level all the time. But now, it’s understood that activity or lack thereof can strengthen or weaken synapses, or even change the number and structure of synapses in the brain. The more a synapse is used, the stronger it becomes and the more influence it can wield over its neighboring, post-synaptic neurons. 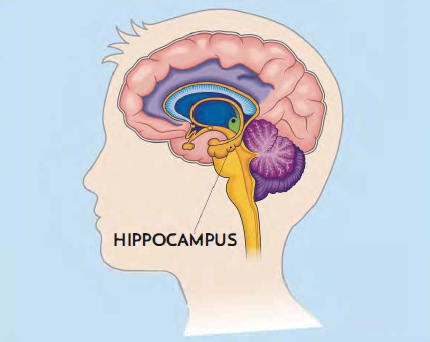 One type of synaptic plasticity is called long term potentiation (LTP). LTP occurs when brain cells on either side of a synapse repeatedly and persistently trade chemical signals, strengthening the synapse over time. This strengthening results in an amplified response in the post-synaptic cell. As such, LTP enhances cell communication, leading to faster and more efficient signaling between cells at the synapse. Neuroscientists believe that LTP underlies learning and memory in an area of the brain called the hippocampus. The strengthening of those synapses is what allows learning to occur, and, consequently, for memories to form.