Back to Parent Page
HomeQ&AHow Does the Brain Work? 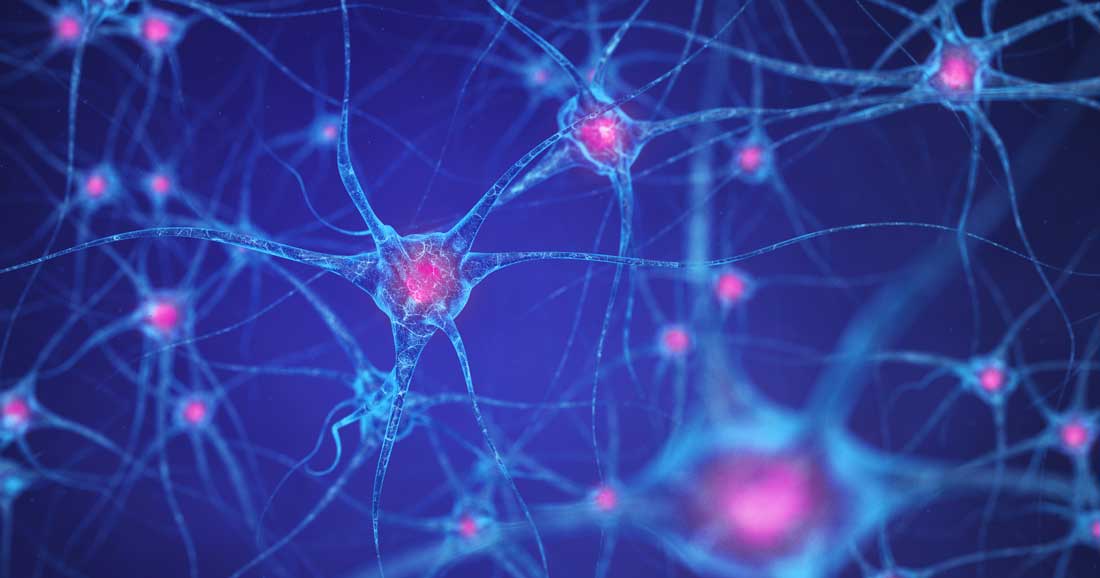 With 80-100 billion nerve cells, known as neurons, the human brain is capable of some astonishing feats. Each neuron is connected to more than 1,000 other neurons, making the total number of connections in the brain around 60 trillion! Neurons are organized into patterns and networks within the brain and communicate with each other at incredible speeds.

How do neurons work?

Each neuron is made up of three main parts: the cell body (also known as the soma), the axon, and the dendrites. Neurons communicate with each other using electrochemical signals. In other words, certain chemicals in the body known as ions have an electrical charge. Ions move in and out of the neuron across the cell membrane and affect the electrical charge of the neuron.

When a neuron is at rest, the cell body, or soma, of the neuron is negatively charged relative to the outside of the neuron. A neuron at rest has a negative charge of approximately -70 millivolts (mV) of electricity. However, when a stimulus comes along (like stubbing your toe, or hearing your name being called), it causes the neuron to take in more positive ions, and the neuron becomes more positively charged. Once the neuron reaches a certain threshold of approximately -55mV, an event known as an action potential occurs and causes the neuron to “fire.” The action potential travels down the axon where it reaches the axon terminal.

At the axon terminal, electrical signals are converted into chemical signals that travel between neurons across a small gap called the synapse. These chemicals are called neurotransmitters. Neurotransmitters cross the synapse and attach to receptors on the dendrites of nearby neurons. Dendrites are branch-like projections that carry impulses received from neighboring neurons to the soma

How is the brain organized? 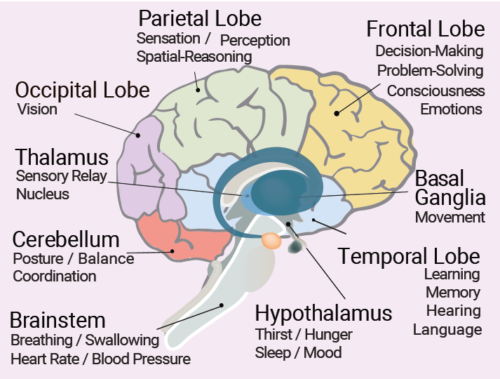 1) The neocortex, which is organized into lobes seen in the illustration below.
2) The neostriatum or basal ganglia, which can be found deep within the structure.
3) The diencephalon, which contains the thalamus and hypothalamus, and is also found deep within the brain.
4) The brainstem.
5) The spinal cord.

Oftentimes, different lobes and areas work together to accomplish complicated behaviors like talking or learning. Not only are these neurons constantly communicating with each other, but they also interact with neurons in the peripheral nervous system.

The peripheral nervous system is comprised of sensory and motor neurons throughout the rest of your body. The sensory neurons collect information from the outside world through the five senses, while the motor neurons allow you to move and respond to signals from the brain and spinal cord.

When you were born, you had almost all the neurons you will ever have, and many more neuronal connections than you have today. The brain continues to change and grow throughout your lifetime because the connections between neurons are plastic. In other words, your brain can add new connections or subtract unused ones. As you grow up, your experiences and environment help your brain decide which connections are important and useful. In addition to your experiences, genetic information also influences your brain’s development. Although it is very complicated to tease apart what is inherited and what is learned, many behaviors appear to be a combination of both genetic and environmental factors

Go to BrainFacts.org to check out a 3-D model of the brain