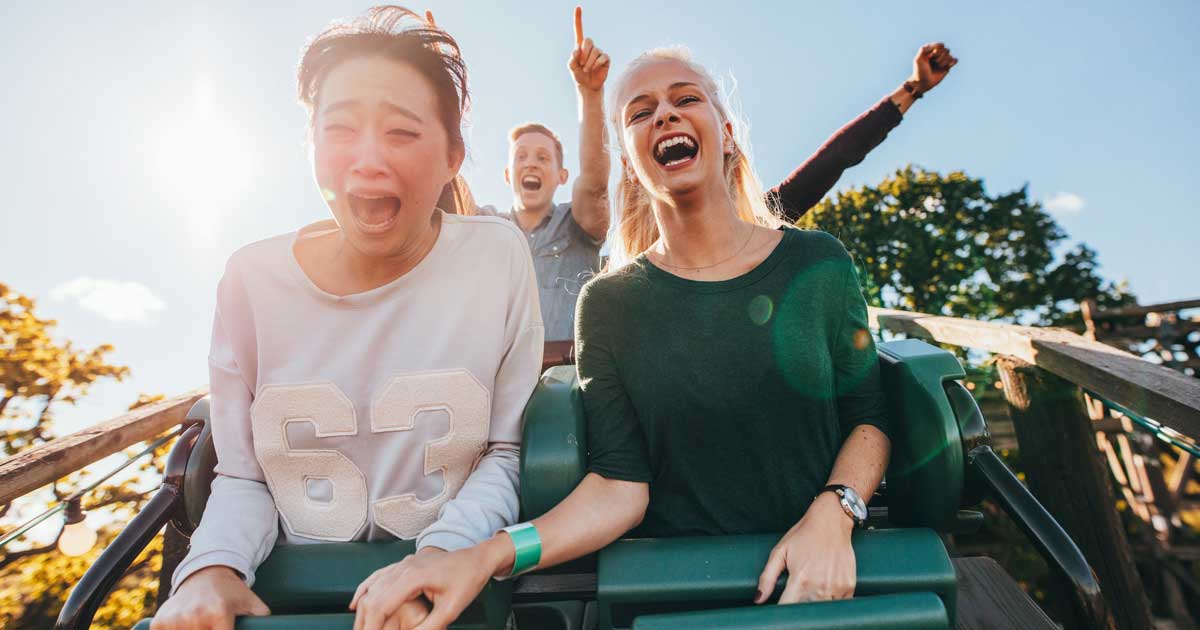 Why are some people drawn to intense, even fear-inducing thrills while others shun the mere thought? How is it that the same horror movie can be entertainment to one person and tension-filled torture to another?

Sensation-seeking, defined as the tendency to seek out varied, complex, novel, and intense experiences, has been recognized as a general personality trait in psychological research since the 1960s. In the past decade, cognitive neuroscience has taken aim at the character trait, hoping to shed light on how the brains of thrill seekers might be wired differently than those who are content with more tame pursuits.

Beyond understanding why one person relishes the fright factor while the next studiously avoids it, scientists are asking how sensation-seeking relates to risky behaviors such as fast driving, drug experimentation, and risky sex, as well as psychiatric disorders ranging from substance use disorder to bipolar disorder–areas where the public-health implications are most clear. The hope is that by understanding the neural mechanisms underlying such behaviors, both at the molecular level and at the systems level, it might be possible to develop therapeutic interventions–pharmacological, behavioral, or neurostimulatory–that might prevent the deleterious effects of risk-taking or help people channel their taste for adventure toward safer pursuits.

Not All Sensation Seeking is the Same

It’s clear from common experience that there is a huge range of sensation-seeking behavior, and that having an affinity for horror flicks or rollercoasters does not inherently make one a drug user or serial cheater. The late psychologist Marvin Zuckerman, Ph.D., who developed the original sensation-seeking scale in 1964 as part of sensory deprivation experiments, outlined four subtypes representing the various ways sensation-seeking is expressed behaviorally:

2. Experience Seeking: stimulation through the mind and senses; the pursuit of unfamiliar and complex environmental stimuli, as through travel or meeting new people.

3. Disinhibition: sensation-seeking through engagement with other people; searching for opportunities to lose inhibitions by engaging in variety in sex, alcohol, drugs, etc.

4. Boredom Susceptibility: the tendency to be easily bored by familiar or repetitive situations or people, or by routine work.

In a 2009 interview, Zuckerman postulated that sensation-seeking must have been an adaptive trait that conferred an evolutionary advantage. “Homo sapiens were the only group of early hominids to emigrate over the entire world, which entailed great risk, so I think humans as a species are characterized by novelty- and intensity-seeking,” he said. Early humans who were more willing to take risks were likely to be more successful hunters, so a certain degree of risk-taking behavior—fueled by the promise of reward—may be programmed into human DNA.

Like any personality trait, there is a normal, bell-curved distribution of sensation-seeking behavior in the population, with most people falling somewhere in the middle in terms of their appetite for intense, novel stimuli, and smaller proportions at the low and high ends. This makes sense from the evolutionary perspective because people at either extreme are at a disadvantage. “If you’re taking too much risk you may die before you have a chance to spread your genes around, and if you’re too cautious, you may not have the advantage of obtaining resources (like food and water) that entail some risk,” Zuckerman said.

Brain-imaging studies have offered some intriguing clues as to how the brain of a high-sensation seeker might be different from that of someone who generally avoids risk, but the answers are far from clear. Much of the work has focused on adolescence, a period when risk-taking is often notoriously elevated, as any parent of a teenager can attest. Adolescence is well recognized as a period of rapid brain changes, as neural systems are pruned and shaped in concert with one’s environmental influences to lay the groundwork for adulthood. In this context, sensation-seeking can be and often is adaptive–a means by which learning and experience drive brain development.

“It’s part of normal healthy development to be curious and seek out new sensations and experiences,” says Mary Phillips, M.D., a neuropsychiatric researcher at the University of Pittsburgh School of Medicine. “The problem is if it’s sustained into adulthood and it’s not checked, and, secondly, if online regulatory systems don’t kick in like they should. Then the thrill-seeking gets out of hand and that’s when we run into problems with people developing substance use disorders and other problems.”

Among the prevailing models for explaining why adolescents tend to have a higher propensity for risk-taking is that the brain systems for reward, on the one hand, and impulse control, on the other, are developing along different trajectories. Reward systems in subcortical areas tend to develop first, while cognitive-control systems in the prefrontal cortex don’t fully development until the early 20s.

“If the two systems are in balance, all is fine and eventually the regulatory systems take control. That’s adulthood,” says Phillips. But in psychiatric conditions such as bipolar disorder, which she studies, the thrill-seeking phase can continue unchecked. “In bipolar disorder, this sensation seeking is not only sustained and intense, but it is truly dysregulated, leading to problems with substance abuse as well as other behaviors that can have really bad outcomes,” she says.

In a series of functional brain imaging studies, Phillips research team has zeroed in on two brain regions of interest to reward processing: the ventral striatum, deep in the brain, and the ventrolateral prefrontal cortex (PFC), on the left side of the front brain. The ventral striatum, which includes the nucleus accumbus, is well recognized for its central role in reward learning–but it doesn’t appear to discern the relative value of reward, and requires other regulatory regions of the brain to rein it in, including the ventrolateral PFC.

The team’s 2017 paper reported an indirect pathway linking activity in specific reward-related brain structures to risky behavior in young adults who scored high on a scale of impulsive sensation-seeking. The work–the first to make this tripartite connection among brain system, risky behavior, and sensation-seeking as a trait–opens the door for targeted therapeutic interventions that might prevent or ameliorate deleterious risk taking, including neurostimulation protocols that could tamp down or ramp up brain activity that is too high or too low. The researchers have been testing a therapy using transcranial direct current stimulation, a noninvasive brain stimulation modality, to do just that in a group of young adults at high risk for psychopathology (paper in review).

Dozens of other research groups are also investigating neural pathways underlying sensation-seeking and risk-taking in an attempt to localize the brain regions underlying this ubiquitous personality trait. Lauren Sherman, Ph.D., and colleagues at Temple University reviewed 23 brain imaging studies investigating individual differences in brain responses to risky decision making in adolescents from childhood to young adulthood. Somewhat surprisingly, their exhaustive review of the literature found no common neural locus and concluded that “neural factors differentiating riskier teens are not localized to a single region.” The brain regions identified in the studies, which spanned ten years of cognitive neuroscience, included 25 cortical and subcortical areas. The authors urged researchers to “think outside the brain” in developing more complex models that account for brain as well as environmental factors that interact to make individuals more or less susceptible to risky business.

Studies of identical twins suggest that heritability accounts for about 60 percent of individual variance in sensation-seeking behavior, and scientists have identified genetic variations that may explain some of these differences. For example, some subtypes of brain receptors for dopamine, the primary neurotransmitter involved in reward processing, are associated with greater sensation-seeking tendencies, while other types appear to have an opposite effect: the fewer there are, the greater the novelty-seeking behavior. The latter may act as brakes on dopamine release, so having fewer of them means that more dopamine is released in response to novelty. This may in turn drive reward-seeking behavior.

The involvement of dopamine in novelty-seeking behavior may also explain the well-established relationship between high sensation-seeking and drug use. High-sensation seekers are more likely than lows to try drugs earlier, to become addicted, and to experiment with multiple drugs. Like drugs of abuse, exposure to novel stimuli releases a rush of dopamine in reward areas of the brain. And, high-sensation seekers often develop a sort of tolerance to high-risk activities—boredom sets in, and they are compelled to add new twists that re-create the initial charge.

The same is true for sex. High-sensation seekers may get bored with the same partner or routine, so they seek out new partners or scenarios to try to regain excitement. “You might say that sensation-seeking is the enemy of marital stability,” Zuckerman quipped.

Getting the Rush Without the Risk

“Each of us, based on our genetic make-up and environmental influences, has different propensities for being drawn toward something that is attractive and appetitive, and on the opposite side, being averse to things that are dangerous or fearful,” says Kerry Ressler, M.D., Ph.D., a neurobiologist and psychiatrist at Emory University and a member of the Dana Alliance for Brain Initiatives. It’s possible that high-sensation seekers may have a lower set-point for fear extinction—meaning they can more easily turn off, or at least tamp down, the physiological response to a fearful event. They may be able to more effectively engage cognitive brain regions to put a fearsome stimulus into proper context, which is pertinent to some activities.

This may be one reason frightening films are so popular. “People who would never engage in high-risk activities themselves get vicarious excitement from movies,” Zuckerman said. “They know that the [monsters] aren’t going to jump out of the screen and get them, so they get a little kick of fear in a safe environment.”

In an interview included on the DVD release of the horror flick The Grudge, Joseph Ledoux, Ph.D., a member of the Dana Alliance and a neurobiologist at New York University who studies the fear response, said: “I guess the real reason that we love to be scared so much when we go to the movies is because we get that adrenaline rush in a completely safe context. We don’t have the worry and anxiety that this will actually affect us in a personal and deep way.”