Back to Parent Page
HomeNeuro News 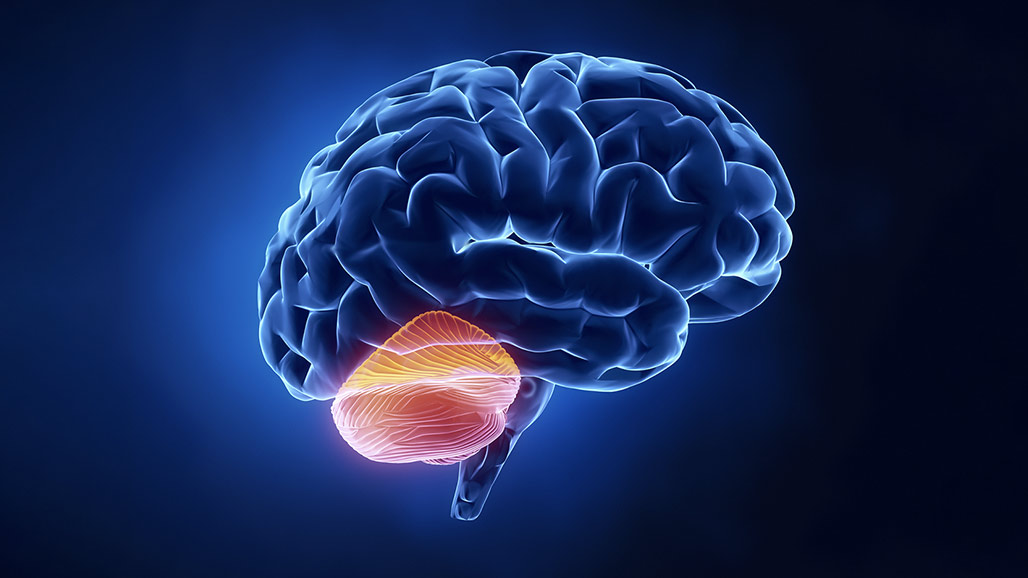 The cerebellum has come a long way. Once relegated to a supporting role in regulating movement, an accumulating mass of evidence has put this small but mighty (it contains half of all the brain’s neurons) structure smack in the middle of a broad range of non-motor functions. Its disruptions have been implicated in neuropsychiatric ills from addiction to schizophrenia. Some research suggests a role in Alzheimer’s disease.

In the motor control system, cerebellar function apparently involves a kind of fine-tuning that coordinates incoming and outgoing neural signals. In complex movements like running or jumping, for example, the body must sense and instantly reposition feet, knees and torso. The cerebellum quarterbacks the process based on learning and predicting what adjustments the task requires.

“We think it’s doing this same computation with all different behaviors, balancing not just movement and gait, but also cognitive control and emotional processing,” Schmahmann says. “An important function of the brain is to maintain the organism in a state of optimal interaction with its surroundings—family, community, the world at large. All require modulation around a baseline.”

Anatomical research from the early ’80s and functional imaging in recent years have established cerebellar linkage to areas of the cerebral cortex activated by diverse cognitive and emotional tasks. But evidence of causation has been elusive. “There was no strong mechanistic framework to interpret those results,” says Kamran Khodakhah, chair of the Department of Neuroscience at Albert Einstein College of Medicine.

A recent study in Khodakhah’s lab, reported in Science, took a big step in that direction. “Our work provides direct, unequivocal evidence that the cerebellum powerfully modulates a non-motor brain area,” he says. That happens to be the ventral tegmental area (VTA), a key part of the dopaminergic reward system central to conditioned learning, motivation, and social behavior.

The researchers genetically programmed cerebellar neurons with projections to the VTA to be activated or inhibited by pulses of light, an optogenetic technique. Stimulating the cerebellar neurons, they found, increased the firing rate of neurons in the VTA as well.

This activation had the effect of reward: by turning the cerebellar neurons on, the researchers induced the mice to prefer a randomly chosen area of the rodents’ cage. Repeated activation even conditioned them to opt for a bright vs. dark chamber—opposite their instinctive pattern.

Most intriguing was the effect on social behavior. When given the choice of entering an empty chamber or one occupied by another mouse, the rodents ordinarily prefer to spend their time in company. By silencing the cerebellar-VTA circuit optogenetically when the mice entered the social chamber, the researchers cancelled that preference. By selectively activating the circuit, they induced the mice to prefer the empty space.

“The study demonstrated that optogenetics can be “an enormously powerful tool in experimental and cognitive neuroscience,” Schmahmann says. “We, astonishingly, can modulate the behavior of an awake animal using these 21st century tools on a specific circuit—and that’s very cool. It’s a real step forward in experimental paradigm, not just for the cerebellum and VTA, but the cerebellum and all the other areas it’s connected to.”

Because conditioned learning and social behavior are central to a range of brain disorders, the reward circuitry explored in this paper could help explain the seeming ubiquity of the cerebellum in psychopathology. The connection is clearest, perhaps, in addiction.

“There is a wealth of indirect evidence that the cerebellum is part of addiction circuitry, and involved in addiction-altered functions such as decision-making, habit, and inhibitory control,” Marta Miquel, of Universitat Jaume I, Castellón de la Plana, Spain, said in an e-mail interview.

As reviewed in her 2016 paper, arguments for this proposition include anatomical links and the role of the cerebellum in forming and storing emotional memory. Molecular mechanisms of cerebellar plasticity are the target of addictive drugs, and altered synapses have been linked to drug dependence, tolerance, and withdrawal symptoms.

Craving is a defining symptom of addiction: repeated studies have shown the cerebellum to be strongly activated by drug cues (such as a syringe, for an IV user) in people with addictions, and linked the degree of activation with the intensity of craving.

The studies reported in the Khodakhah paper provide “a straightforward mechanism to understand cerebellar control in motivation and decision-making, and, more important, to explain how addictive drugs can alter these functions,” Miquel says.

“Addiction is a brain disorder that involves much more than dopamine,” she says, “but it is clear that drug-induced dopamine alterations are a crucial part of its physiopathology.”

Considerable research links the cerebellum with autistic spectrum disorders (ASD), says Catherine Stoodley of American University. “You see connections at every level of analysis: post-mortem studies, mouse models; in human neuroimaging [of ASD], cerebellar differences were one of the earliest findings.”

Disrupted social behavior is a core feature of ASD, and the finding, in the Khodakhah research, that the cerebellum can directly modulate social reward, “is a compelling piece of the puzzle,” she says. The methodology is “very exciting: any time you can be specific about the circuits you’re targeting and modulating, it allows for a level of detailed understanding we couldn’t have just 10 years ago.”

Stoodley’s own research examines the cerebellum in another kind of detail. “It’s possible that regions within it are associated with different symptoms of autism.” she says. “Originally, associations with the repetitive motion aspect of autism got the most attention. Now, we see some of the most compelling evidence in the social cognition domain.”

Both animal and human imaging data brought her attention to the Right Crus (RCrusI) area of the cerebellum, which has functional connectivity to cortical networks relevant to social processing and to ASD.

In a study reported in Nature Neuroscience, she and colleagues showed that this connectivity is disrupted in mouse models of ASD, and in children with the condition. When the researchers chemically inhibited RCrusI activity in normal mice, the animals demonstrated impaired social behavior in ways comparable to mouse models of ASD.

Most interesting of all, the researchers showed that chemically stimulating the RCrusI in an ASD mouse model restored functional connectivity between the cerebellum and the crucial part of the frontal cortex, and ameliorated ASD-type social deficits. The treatment “rescued” social behavior in the mice.

Might the cerebellum be a gateway to effective treatment for ASD? A feasible approach that Stoodley is already exploring involves transcranial brain stimulation.

The location of the cerebellum makes it highly accessible to these non-invasive techniques: direct current stimulation (tDCS) of the area has been used effectively for a movement disorder, dystonia; and transcranial magnetic stimulation (TMS) was shown in a 2010 study to improve symptoms of schizophrenia.

In the Nature Neuroscience paper, Stoodley and her colleagues showed that tDCS could alter cerebellar-cortex connectivity in neurotypical human subjects, and she has not-yet-published data on whether these changes influenced performance on social, language, and motor tasks.

She is collecting data on symptom modulation with tDCS in young adults with ASD. “We’re still exploring the basic science of the mechanism. There’s a suggestion of the potential for therapeutic application, but we need to do more of the basic research first.”

Kamran Khodakhah expresses similar cautious optimism. He plans to collaborate with psychiatric colleagues in testing TMS to reduce craving and prevent relapse in addicts—but only after several years of animal work exploring the cerebellar-reward circuit and social behavior in more detail.

Some of the most provocative—and speculative—research involves neurodegenerative disorders, including Alzheimer’s disease. “It’s very much a fringe conversation,” says Jeremy Schmahmann, “but I was struck by the literature, going back a long time, pointing to pathology in the cerebellum in AD.” The circuits that degenerate in AD “seem to include the cerebellum, … although the cerebellum itself is relatively spared by the disease.”

If its involvement proves to be meaningful here, “perhaps we can use the cerebellum to gain access to the system and improve damaged function in the cerebral hemispheres,” he says.