Back to Parent Page
HomeArticlesWrestling With Our Digital World 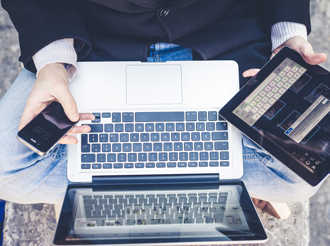 Digital technology has rapidly, radically changed our world, its impact growing exponentially to the tune of an estimated 3 billion smartphone users and 2 billion Facebook subscribers worldwide. And like most technology, it’s not an unmixed blessing.

The transformative effects of digitality were much in evidence at the annual meeting of the American Psychiatric Association, a convocation of some 15,000 professionals whose concern is the mind and its ills. Smartphone use and diverse digital applications were explored in depth in several presentations and touched on by others, giving a composite portrait of the good, the bad, and the ugly faces of the new technology.

There are risks inherent in pervasive digital exposure, particularly to young people who are its most devoted users, explained Baroness Susan Greenfield, a neuroscientist, Dana Alliance member, and founder and CEO of biotech firm Neuro Bio, in a lecture on “How the digital world shapes the way we think and feel.”

Childhood and adolescence, she pointed out, are times of the brain’s most rapid growth, as synaptic building and pruning create a neural web from which arises an understanding of the world and oneself. Much of this structure, she observed, is shaped by interaction with the environment.

The infusion of a barrage of digital information and stimulation into this process, when young users lack defenses and the framework to put it in perspective, is unknown, Greenfield said. It represents “the biggest experiment ever on the younger generation.”

Early findings of the experiment, by her account, are not encouraging. “The first issue is addiction,” Greenfield said. The prefrontal cortex normally tempers the urge for risk-taking and sensation-seeking driven by dopaminergic reward circuitry, and the PFC is still developing through adolescence. The intense stimulation of video games, demanding a quick response, “releases more dopamine and inhibits the PFC,” she said. It puts gamers “in scenarios similar to obsessive, compulsive gambling… the thrill of the moment overrides consequences.”

She cited studies indicating that the same brain areas are enhanced in video enthusiasts as in gamblers. What’s more, a relentless focus on here-and-now sensation of external stimuli inhibits the development of an internal narrative that gives personal meaning and a strong sense of identity, she said.

Identity takes another hit from social media, according to Greenfield. “What does it say about ongoing consciousness if you have to constantly seek attention and approval from others, from an ‘audience’ who are fickle and constantly need to be entertained?” To avoid criticism and bullying, “you hide the real you, in favor of an ideal person.”

More generally, computerized interaction at the expense of face-to-face contact can stunt social development. “When we meet another person, only 10 percent of the impact comes from words. Eye contact, body, language, tone of voice, even pheromones are also important for relationships. None are on Facebook. If you’re a young person you’re not getting experience in interpersonal communication.”

The result, Greenfield said, can be autistic-like behavior. “Recently, people have been talking about ‘virtual autism,’ and the effect of early screen behavior on development. It’s controversial, but we can’t pretend the question doesn’t exist.” [Greenfield is herself quite a controversial figure. A 2015 editorial in BMJ called her assertions poorly based in science and “misleading to parents and the public at large.”]

In another presentation, Dana Alliance member Thomas Insel looked at digital media and saw promise rather than peril—in particular, a cure for what ails the mental health care system.

Despite revolutionary progress in neuroscience and increasing medication use, “neuropsychiatric disorders remain the largest source of morbidity across all medical disorders,” said Insel, a former head of NIMH who is now president of Mindstrong Health, a company that aims to provide a platform for the kind of health care he proposes. “Whatever we’re doing, things are not getting better. In some ways the picture has worsened.”

Effective treatments are available, he said, but “50-60 percent of people with mental illness are not in treatment.” Among the reasons, he cites stigma and lack of access, but gives the lion’s share of blame to “additudinal barriers.”

The fundamental structure of the mental health care system is flawed, organized around the convenience of the provider, not the consumer, he said. It is reactive, fragmented, and involves unavoidable delay.

“I’d suggest that in today’s world, digital natives expect the same kind of service they have on Amazon, and they’re not seeing it in mental health care,” Insel said.

Treatment itself needs more precision and more connection to people’s day-to-day lives, he suggested. “There are no biomarkers for psychiatric diagnosis, or for outcomes. You can’t manage what you can’t measure.”

Enter digital psychiatry. “Even older smartphones are more powerful than the supercomputers of the 1990s. Every patient has a supercomputer in his pocket.” It can be used to gather and transmit data for diagnosis and to track treatment response, through “digital phenotyping,” he said. “The idea is taking signals off the phone and putting them together in a way that creates a deep understanding of behavior, cognition, and mood.”

Sensory signals reveal what you do and where you go; the ratio of texts out and in can reflect sociality. “From voice and speech we can understand an enormous amount about a person’s affective state.”

But less recognized and potentially more powerful, Insel said, are parameters of human-computer interaction, like how you use the keyboard. Scrolling and clicking, intervals between delete, space, and character, “these are surprisingly good surrogates for reaction time, information processing, attention, and memory. Through the power of machine learning, we can begin to identify features associated with depression, early psychosis, risk factors for PTSD.”

Studies have shown substantial correlations between keyboard patterns and cognitive measures; a study of depressed patients found that digital phenotyping could assess mood as well as a standard test. In a clinical trial of a psychotherapy, digital data echoed fMRI imaging of patterns that reflect cognitive control and reward.

“You could imagine combining the rich data set from digital phenotyping with cognitive tests, neuroimaging, and other approaches for a picture that would help most of all,” he said.

The same digital platform can be used to deliver interventions such as psychotherapy without the delay and access problems of conventional mental health care, Insel said. He offered as an example 7 Cups, an online peer support and therapy system that he described as “AA combined with Facebook.”  (Insel is on the board of 7 Cups.)

Users are connected, via online chat, with trained listeners and with others who have similar problems. They are monitored with online tests of anxiety and depression. The website provides free instruction in self-administered interventions like mindfulness and cognitive behavior therapy, and if needed connects users with licensed therapists whose services are delivered online.

The service has generated “enormous interest, particular in people under 30,” Insel said. “In many markets they’re impacting more people than we are.” There are 575,000 7 Cups users in California, for example, compared to 450,000 people in the mental health system.

“Of all areas of medicine, digital media are likely to have an impact on mental health,” he said. “Unlike diabetes or heart disease care, we don’t need bricks and mortar for a lot of what we do.”

Other presentations at the meeting added detail and nuance to the portrait of the mental health-technology interface. Faith Gunning of Weill Cornell Medical College described a therapy for late-life depression in a video game-type format delivered via iPad. “Patients really like it,” she said, and early findings suggest it works to reduce symptoms.

On the other hand, poster presentations of unpublished data found increased emotional, conduct, and academic problems among school-age children who compulsively used the internet and their smartphones, and documented the emergence of a new techno-disorder, “selfie addiction.”

Perhaps the most intriguing example of the complexity of digitality came from Nora D. Volkow’s talk on addiction research. Volkow, a Dana Alliance member and director of the National Institute on Drug Abuse, noted a decline in drug and alcohol use among teenagers, and suggested the rise of social media and other digital pastimes might be one factor.

“Drug experimentation is a group activity,” she said. “A hypothesis that researchers want to test is that with less opportunity for one-on-one interaction, there’s less likelihood to have peer pressure to consume drugs.”

But this same compelling quality, Volkow said, may result in some teenagers neglecting friends, schoolwork, even sleep. “There have been reports of teenagers who have collapsed after playing video games continually.”