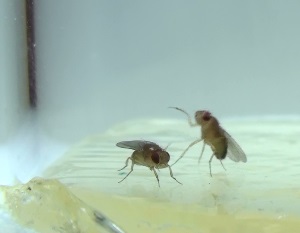 The image is a photograph of two male flies. The fly on the right (standing on its hind legs) is preparing to “lunge” at his opponent, by snapping downwards on his body and pushing him away. Flies do not appear to hurt each other when they fight. Photo Credit: Eric Hoopfer

It may surprise some people to learn that fruit flies fight.  But male Drosophila melanogaster (more accurately called “vinegar flies”) do fight–to gain access to resources such as food or females. In this respect, they are not different from other animals: males of most species fight with other males, for the same reasons. Unfortunately, we know all too well that in humans, aggression can take on maladaptive (abnormal) forms that lead to violence, against other individuals or even entire groups of people, with disastrous consequences.

Given the public health problem posed by violence, it is surprising how little we know about the brain mechanisms that control aggression.  We cannot even answer some of the most basic questions: Are there neurons in the brain that specifically control aggression? If so, where are they located and how do they function? Is maladaptive aggression, such as sexual violence, due to dysfunction of these neurons? We simply do not know. If we wish to solve the pressing problems of violence that plague our Society, it is essential to understand the basic brain mechanisms that control aggressive behavior. The most effective way to do this is to focus on animal models of aggression, because they allow us to perform genetic and invasive experiments –delving deep into the brain – that simply would not be possible in humans.

But why the fly? Why not simply study aggression in lab rats or mice?  After all, the fly has a tiny brain – its entire nervous system could fit into a 1 mm 3 piece of our cortex – and its anatomy is nothing like that of the human brain. Flies do not have a recognizable amygdala, or hypothalamus (brain regions that have been implicated in aggression). What can we learn about aggression from studying a fly, and what possible relevance could such an evolutionarily distant creature have to understanding aggression in humans?

The past decade has seen a revolution in the development of new techniques for decoding brain function: we can now identify specific classes of neurons; map their connections; monitor their activity; and manipulate their functions. Never before has it been possible for neuroscientists to study the inner workings of the brain with such laser-like precision. At the core of these transformative technologies is the power of molecular genetics: the ability to identify, target and tweak specific classes of neurons based on their genetic makeup.  One may think that “a neuron is a neuron is a neuron,” but there is a tremendous diversity in the types of neurons in the brain. The most basic distinction, for example, is between neurons that excite other neurons, and those that inhibit them.  If we didn’t have the latter to tamp down brain activity, we would all suffer from continuous epileptic seizures.

But brain cell diversity goes far beyond that: within each of these two major classes, there are hundreds if not thousands of different subtypes of neurons, each sculpted by evolution, development, and learning to have a specific function in the brain. These neuron subtypes differ from each other in the spectrum of genes that they turn on (“express”), just as liver cells differ from blood cells (the genome encodes 20,000 genes, but only a subset of those are turned on in any given cell type). As described below, brain science technologies now allow us to exploit these gene expression differences to identify and study the function and connections of different types of neurons. They might even allow us to find out whether there are neurons that specifically control aggression. While these methods cannot be applied yet to humans, for both ethical and technical reasons, in animal models they are providing new insights into brain function that could not be achieved even as recently as 10 years ago.

These techniques for dissecting brain circuitry are especially useful when combined with the powerful genetics, smaller nervous system, and simple laboratory maintenance of Drosophila. The fly has only about 100,000 neurons in its brain, compared to 100 million in a mouse and 100 billion in a human. Each of the neurons in the fly brain, moreover, has a characteristic shape that hardly varies at all from one fly to another, allowing these neurons to be visually identified. This reproducibility of cell shapes in the fly brain makes it much easier to find genes that are specifically turned on in these neurons—that serve as molecular “markers” for these cells.

Once such genes are found, the genetic “toolkit” available in the fly makes it possible to generate “designer flies” in which we can not only visualize these neurons with beautiful fluorescent markers, but also control their activity – to turn them on or off, at will. In this way, we can move beyond studying the brain in a “look, but don’t touch” manner, to both looking and “touching” the neurons – manipulating their function to see how they control behavior.

So, what have we learned so far about the neuronal control of aggression in vinegar flies, and does it tell us anything about aggression in ourselves?  We have learned that flies seem to contain a small number of specific neurons that control aggression. Artificially activating these neurons causes the flies to fight like mad, lunging at each other and tussling like enraged boxers. By contrast, artificially inhibiting these neurons turns fighting flies into pacifists. As far as we can tell, these neurons play a very specific role in aggression: they don’t seem to control feeding, mating, walking, grooming, or other typical fly behaviors. Moreover, these neurons are seen in male but not female fly brains, perhaps explaining why male flies are more aggressive than females.

Does that mean that we humans have aggression neurons in our own brains?  We don’t know for sure, but in other work we have identified what appear to be aggression neurons in the mouse brain. These neurons are located in the hypothalamus, an evolutionarily ancient structure deep in the brain that is also present in humans. Therefore, it seems likely that humans have similar cells as well. But if we were able to find these cells in mice, then why even bother with flies? First,  the work in mice progresses far more slowly than in flies, because of their long generation time (10 weeks for a mouse, compared to 12 days for a fly). Our findings in the fly encouraged us to pursue our more laborious studies in mice. Second, flies have only about 3-5 of these “aggression neurons” in their brain, while mice have ~2,000.  That makes it much easier to study the neurons in the fly, and to discover the other cells with which they connect. Ultimately, it may be possible to reconstruct the entire circuitry in the fly that transforms the scent of another male into the decision to attack. In the mouse, this will be much more challenging. The important point is that even though the brain of a fly doesn’t look like our own brain, it appears to follow certain basic principles in how it uses its neurons to control behavior, which may generalize to “higher” organisms, including humans.

Finally, what about genes and aggression? In some sense, this is the “$64,000 question:” what makes some of us more prone to aggressive outbursts than others?  Is it in our genes?  Our environment? Or both? Once again, Drosophila allows us to ask this question, because of its genetic simplicity. But how do we look for genes that might influence aggression in flies? The fact that we can identify aggression neurons by the genes they express provides some clues. The aggression neurons that we have identified express (turned on) a gene that encodes a kind of signaling molecule called Drosophila Tachykinin (DTK). DTK is a “neuropeptide” – a protein that functions as a chemical messenger between certain nerve cells. Because the aggression neurons contain the DTK neuropeptide, we suspected that DTK might be released from the neurons when they were active, and thereby play some role in promoting aggression.

To test this hypothesis, we generated flies containing mutations in the DTK gene.  Remarkably, these mutant flies were much less aggressive than normal (“wild-type”) flies. Conversely, when we “juiced up” the aggression neurons by adding extra copies of the DTK gene, so that they would release more of the peptide when artificially excited, it made the flies super-aggressive: so much so that they would even attack a little fly-sized magnet that we moved around the fighting arena. These results suggested that not only the neurons we discovered, but also the DTK peptide, play a key role in controlling aggression. In this way, we could connect a gene that controls aggression to a nerve cell that controls aggression, providing an important link between DNA, brains and behavior.

We went back to the scientific literature to see if anyone had previously implicated this neuropeptide in the control of aggression, in any other species. We discovered that relatives of this gene (called simply “TK”) have been implicated in aggression in mice, rats and cats.  We even found a recent study in which doctors measured the level of this peptide in the cerebrospinal fluid (CSF) of patients with personality disorder. Strikingly, there was a small but significant correlation between patients who described themselves as more aggressive and higher levels of the TK peptide in their CSF. Together, these data suggest that TK might play a role in aggression in organisms as distant as flies and mice, and maybe even in humans.