Back to Parent Page
HomeCerebrumThe Sound of Healing 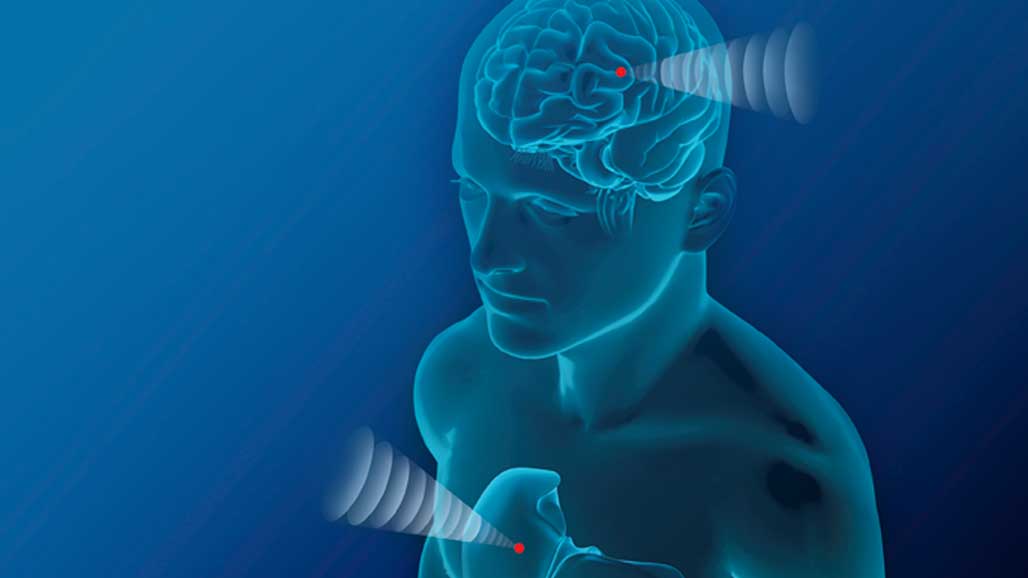 Bald is beautiful, and it’s better than a rug or a combover,” he said.

“Neurosurgeons prefer bald patients,” I replied from our pre-operative wing, where preparation for focused ultrasound treatment includes a shaved head.

The patient, 76-year-old John Williams, had been experiencing tremor of his right hand for the past several years. The chief executive officer of a local door manufacturing company in Maryland, Williams had heard about magnetic resonance imaging-guided focused ultrasound for tremor a few years ago.

“I couldn’t place a golf ball on a tee,” he revealed. Eating, drinking, and writing all became difficult tasks, especially since he is right-handed. Over the years, Williams had learned to make do with his left hand.

He had seen a movement disorder neurologist, who prescribed medications. Essential tremor can affect the hands, feet, face, and voice. Patients find it a challenge to eat, drink, write, or perform other daily functions, and often avoid social outings. Unfortunately, medications did not work for Williams, and his tremor became worse.

He had first considered deep brain stimulation (DBS), a more common neurosurgical treatment that has proven effective in treating his disorder. DBS involves thin electrodes implanted into the brain to modulate a specific portion of the thalamus, the brain’s signal relay station. DBS can be effective and last many years, but Williams thought it was too invasive and was wary of rare complications such as infections, bleeds, or need for revision.

He instead turned to the University of Maryland Medical Center for focused ultrasound treatment, a less invasive, incisionless surgery pioneered by the brothers William and Francis Fry and more recently modernized by Kullervo Hynynen, M.D., and colleagues. Focused ultrasound to treat essential tremor is available at two dozen institutions in the US, and the University of Maryland was an early site for treatment and contributor to clinical trials.

In our multi-center team’s landmark focused ultrasound trial in 2016, patients with essential tremor experienced a 40 percent reduction of symptom severity one year after treatment and a 50 to 60 percent improvement in their ability to write, eat, dress themselves, and work. Currently, a new trial we are conducting is directed at bilateral tremor (tremors on both sides), and we are also trialing focused ultrasound to treat symptoms of Parkinson’s disease, to reduce neuropathic pain, and to improve visualization and drug delivery for the treatment of brain tumors.

Focused ultrasound treatment requires that patients first undergo a series of tests for eligibility. A CAT scan reveals if their skull has the required density for treatment. On the day of treatment, a neurosurgeon places a stereotactic frame on the patient’s head. A bag of cooled water sits on their scalp to reduce heating of the skull. The patient lies on the MRI table, where this frame and bag meet a hemispherical array.

In this array, approximately 1,000 sound-emitting elements can be individually steered and converge on a single target where these beams meet within the brain. With this technology, acoustic beams burn a hole the size of a quinoa seed in the thalamus, disrupting a circuit known to underlie essential tremor, all while the patient is awake and under real-time MRI.

Williams decided that the time had come to try it.

“Are you anxious at all?” I asked him.

“Honestly, my wife is more scared than me,” he said, smiling at Carol.

Our staff wheeled him to our focused ultrasound suite. A neurosurgeon specializing in movement disorders placed a stereotactic frame (a square of hard plastic) on his head. This would allow the focused ultrasound workstation to marry his MRI with his prior CAT scan imaging.

We sat him down on the MRI scanner and connected his frame to the hemispherical array with a bag of continuously cooled water in between.

With imaging, we located the left ventral intermediate nucleus, a segment of the thalamus involved in the circuit that underlies tremor, called the dentatorubrothalamic tract. Disrupting this tract, as DBS does, allowed us to affect his right hand.

In sequential steps, our team directed these elements and applied sound. After each treatment, Williams’ tremor was tested to determine the procedure’s effect. He was asked to draw a straight line and then to accurately draw a spiral within boundaries on a sheet. With each dose of sound energy, his attempts became more precise.

“It was a strange experience,” he said.

After an hour—his treatment concluded—an MRI demonstrated successful destruction of the left ventral intermediate nucleus. At the recovery area, his stereotactic frame was removed.

Our nurse handed him a pen and paper. With Carol at his side, Williams adeptly wrote his name. Seeing this, she almost broke down in tears.

“I was not able to do that for many years,” he said. “I’ve been re-training my right hand for eating and shaving now that I can use it again.” A month later, he was using his right hand again.

“It seems miraculous to me,” said Williams.

Abdul-Kareem Ahmed, M.D., is a neurosurgery resident at the University of Maryland Medical Center.