Back to Parent Page
HomeArticlesThe Skinny on Epilepsy

Although a common brain disorder that affects almost four million people nationwide, many people know little about epilepsy. Stephanie Rogers, a doctoral candidate at New York University (NYU), attempted to demystify the disorder with a thorough overview of “The Science of Epilepsy: What Is It and How Can We Understand It?” at Columbia University’s Zuckerman Institute during Brain Awareness Week.

Rogers explained epilepsy with a metaphor: Imagine neurons in the brain are people in a public space. Some of the people (neurons in a certain network) are having a conversation and talking directly to one another while others are overheard by the other people (neurons) in the room. During a seizure, all the people become distracted and stop their normal conversation and, in unison, chant a certain message—like fans at a sports game. Seizures activity is neurons joining together in a chant in the brain, and epilepsy is a neurological disorder caused by abnormal electrical activity in the brain. 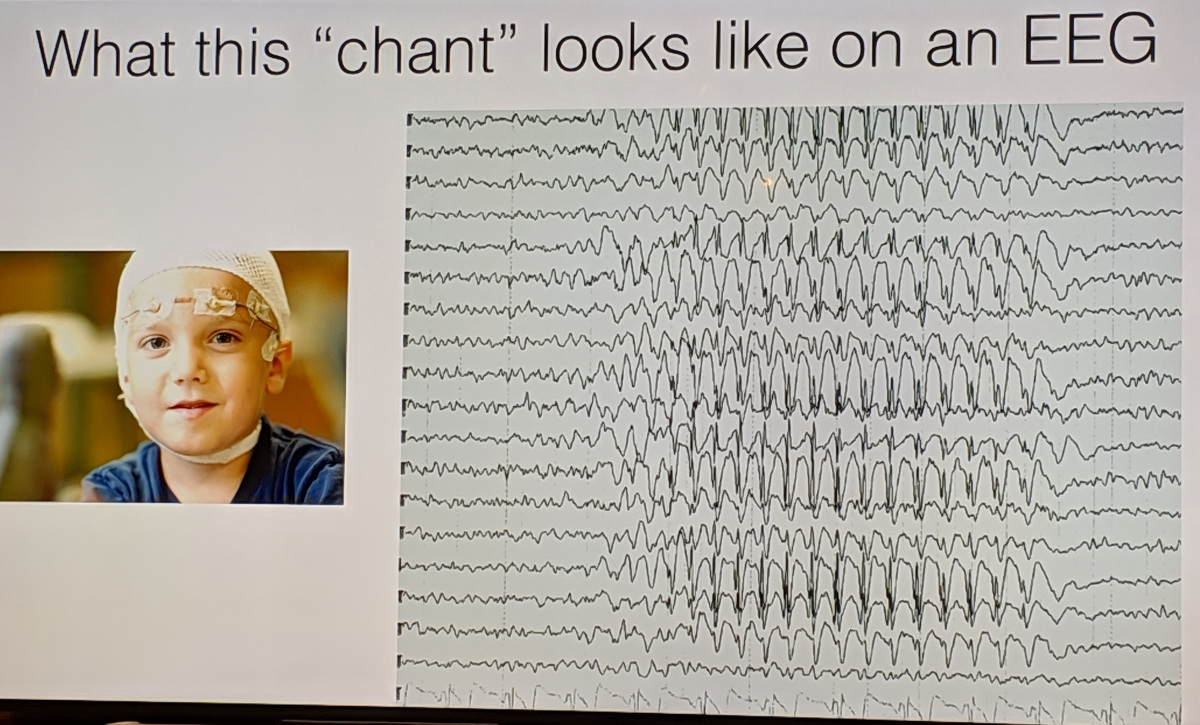 She explained that seizures can occur in all regions of the brain, including the frontal, parietal, temporal, and occipital lobes, and in the cerebellum. Depending on where seizures occur, different functions and neural networks are affected, creating a large variance in behavior during a seizure and different forms of epilepsy. For example, seizure activity in the visual cortex can cause flashes of light, or even vision loss.

When many people think of epilepsy, they first think of one type involving seizure activity in multiple regions of the brain—grand mal seizures (tonic-clonic or convulsive seizures)—where the person becomes unresponsive and spasmatic. There are, however, many other types, including clonic, tonic, myoclonic, and atonic seizures. Rogers focused on absence (petit mal) seizures, which are often not initially diagnosed as epilepsy because the symptoms can mirror other brain disorders. She showed a video of her sister, who suffers from absence seizures and loses focus or becomes unresponsive during the seizure. This behavior can easily be mistaken for “not paying attention,” “daydreaming,” or being easily distracted.

Rogers pointed out that most bystanders don’t know how to help someone who is having a seizure. Inserting a spoon or other object in a person’s mouth to prevent them from choking on their tongue during a seizure is one of the most common myths about epilepsy. This can cause a person to choke or to break his or her jaw or teeth.

Here are some essential tips for keeping a person with epilepsy safe during a seizure:

Rogers emphasized that the stigma that surrounds epilepsy and the social isolation that those with the disorder can experience should be part of the conversation when discussing the disorder. In the past, those with epilepsy have been labeled as demonically possessed or less intelligent and are sometimes shunned by their peers. For many people, it is difficult or even painful to watch someone suffer through a seizure; but it’s important to realize seizures are temporary, and they rarely affect a person’s personality. In fact, social isolation and rejection most likely account for the comorbidity of anxiety and depression that can result from epilepsy.

Rogers went on to discuss treatments that tend to be relatively ineffective: 30 percent of patients don’t show any improvement with anti-epileptic drugs. Common treatments include deep brain stimulation, removal of epileptic focus (both are invasive neurosurgery), vagus nerve stimulation (a pacemaker-like machine must be implanted in the body), and CBD (cannabidiol). While CBD is the newest and most well-known treatment, it has only been proven effective in treating two specific types of epilepsy, both of which are genetic.