Back to Parent Page
HomeCerebrumThe Neurobiology of Brain Injury 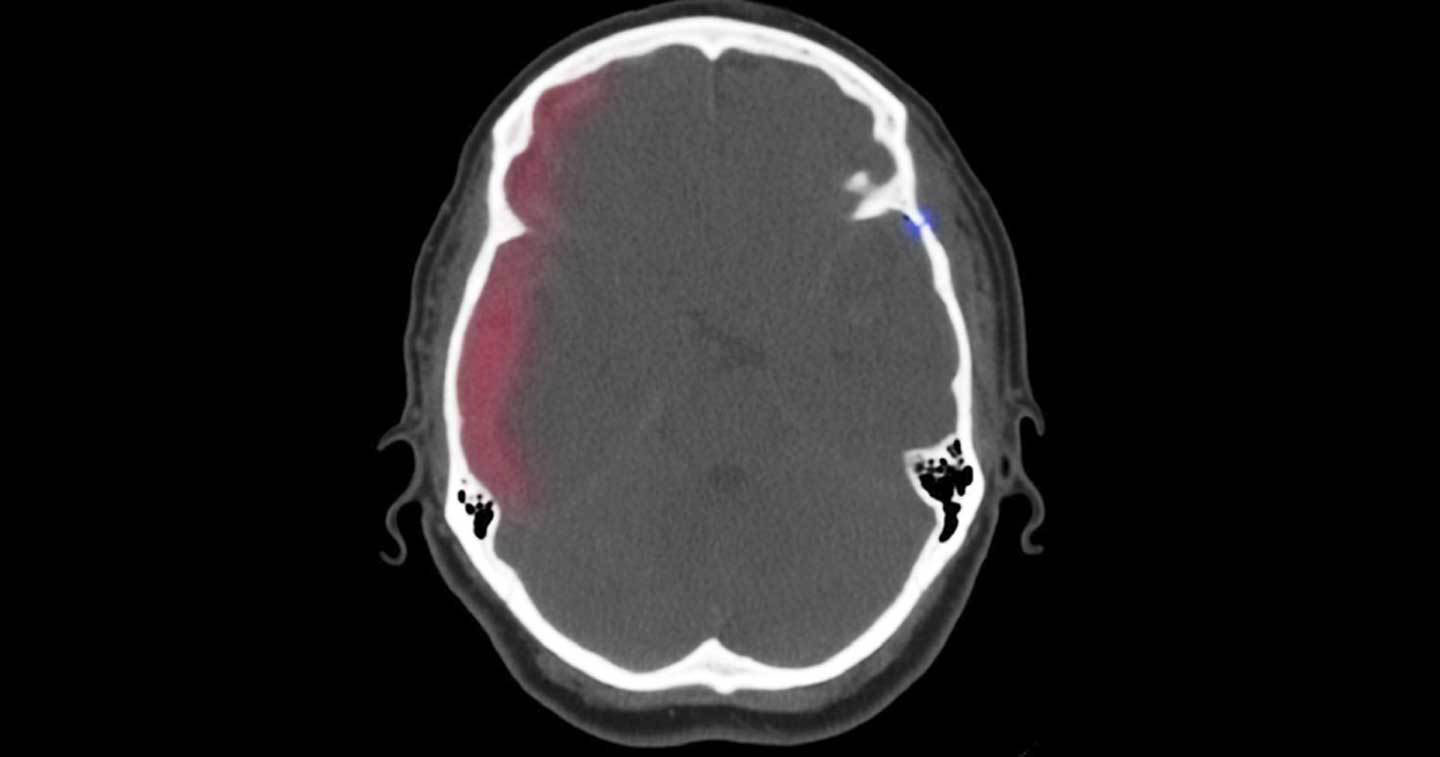 CT scan of the head of a 67-year-old woman who fell, showing an acute subdural hematoma on the left side of her head. Image: Kallista Images/Getty Images

Brain injury caused by head trauma or stroke affects all brain cells, including neurons; glial cells such as astrocytes, microglia, and oligodendrocytes; blood vessel cells; and cells that produce and recycle cerebrospinal fluid (CSF), which line the brain’s ventricles. In addition to causing direct cell damage and cell loss, brain injuries disrupt blood flow and the blood-brain barrier (a barrier that allows only selective molecules to pass from the bloodstream and come in contact with neurons and astroglial cells). Brain injuries also interfere with the production, distribution, and reabsorption of CSF and cause changes in the metabolism and function of cells not only in close proximity to the dying tissue but also in more remote brain regions functionally and anatomically connected with the injured area.

Brain Injury at the Cellular Level

Neurons continuously receive, process, and integrate information from the whole body, including the brain, and send out signals to other neurons and cells in the periphery. Neurons do not work in isolation; they form intricate circuitry, the function of which is directly or indirectly influenced by all other cellular components of the brain tissue. Brain injury affects neuronal circuitry by causing the death of neurons and glial cells and destroying connections between them. This includes the cellular extensions (dendrites and axons) through which neurons receive and emit signals by means of molecules called neurotransmitters. Brain injury often leads to excessive accumulation of neurotransmitters in the brain tissue, in particular glutamate, which can overstimulate neurons and cause neuronal death.

A limited number of neurons responsible for specific tasks perform the brain’s many functions. A specific region in the brain controls the muscles moving the hand, for example, while another group of neurons controls the muscles involved in talking, and yet another region processes the information from our auditory system so we can understand spoken language. This very specific localization of functions within the brain is the reason injuries to different brain regions lead to varied symptoms.

Importantly, the brain can limit the spread of damage by forming a glial scar that seals off the damaged region.1-4 Glial cells (astrocytes, oligodendrocytes, and microglia) are particularly important in this process. Astrocytes produce glucose and other nutrients, as well as support the viability of the surviving cells. Researchers studying brain injury have reduced the injury-triggered activation of astrocytes in experimental mouse models5-7 and found that the ensuing damage was greater than damage in animals with fully responding astrocytes, implying that astrocytes are protective in brain injuries.8, 9

Researchers are giving astrocytes, once considered just the glue filling the space between neurons, ever increasing attention. They have long known the importance of astrocytes in maintaining brain environment stability (homeostasis), providing nutrition for neurons, and recycling neurotransmitters. More recently, researchers showed that astrocytes also control many functional aspects of the brain in health and disease. These include control of blood flow,10 induction and functional control of neuronal synapses,11, 12 and plasticity and regeneration processes.2, 4 To learn more, see box one.

In contrast to other organs that can replace even large numbers of cells lost to injury or disease (such as the skin and liver), brain tissue’s capacity to regenerate is extremely limited. However, nervous tissue has a remarkable ability to adapt its function rather than to regenerate its structure in response to a changing environment; this ability constitutes the basis for learning. In neurobiological terms, this ability to adapt to and learn from experiences is called neural plasticity. At the structural level, neural plasticity could be defined by the number and complexity of dendrites and axons, the density of synapses (connections between neurons, through which information is transmitted from one neuron to another), and in some brain regions also by the number of neurons. Brain injury leads to increased neural plasticity in the spared regions. This allows the neurons in these regions to take over the sensory or motor functions that had been performed by the damaged areas. This remapping of function (indeed similar to drawing a new map) is critical in the recovery of function.

Astrocytes are important regulators, controlling the number of neurotransmitter molecules present in the space between neuronal and astroglial cells. A large change in the size of this space leads to the development of brain swelling. Recent findings show that the capacity of astrocytes to take up the inhibitory neurotransmitter gamma-aminobutyric acid (GABA) is reduced in the zone surrounding brain cells killed by stroke.13 The inhibition of neurons by excessive amounts of GABA counteracts neural plasticity and impairs functional recovery. Importantly, a drug that blocks the binding of GABA to some of its receptors can reduce this GABA-mediated inhibition. Such a treatment, if provided at the right time after stroke, results in a faster recovery of function in mouse models.13 However, when administered too early, the drug can increase the amount of brain tissue damaged by stroke. These findings, together with many other reports, demonstrate that the response of brain tissue to injury is complex, that many cellular and biochemical events take place in an orchestrated cascade, and that each phase of the healing process has a specific purpose. Therefore, the timing of any therapeutic intervention is critically important to the outcome.

Neural plasticity peaks within one to three months after injury; this creates a unique window of opportunity. During this window, neurorehabilitation—physical therapy, for example—is most effective. However, significant improvements can occur even at later stages, especially when rehabilitation combines task-specific training with therapies that activate neural plasticity.14

The Role of the Immune System

Research findings during the past decade show that the immune system in the brain itself and immune cells and molecules from the blood play an important role in the normal development of nervous tissue as well as the brain and spinal cord’s response to injuries.15-17 For a more detailed explanation, see box two. Reactive astroglial cells in the glial scar produce molecules that inhibit the growth of neuronal processes and thus limit recovery. At a later stage (weeks and months after injury), when the activity of the astroglial cells is no longer needed for limiting the spreading of tissue damage, the immune system signals to the astroglial cells in the scar to reduce their activation. The down-regulation of astroglial cell activity is necessary for effective repair and functional recovery, however, the signals from the immune system that downregulate astroglial cells’ activity may come too late or may not be sufficient to achieve the maximum desired effect on their own. This opens an opportunity for therapeutic interventions.

Immune activity in the brain changes with time after injury and needs to be tightly controlled, as its malfunction can aggravate the damage. Astrocytes contribute to immune regulation through their role in resealing the blood-brain barrier as well as via secretion of factors that directly regulate immune-cell activity. The degree and timing of such cross-talk between the immune and glial cells can be suboptimal, which opens a possibility for designing pharmacological interventions that would reduce the astrocytes’ reactive response and modulate the immune cell activity.

The cells and molecules of the immune system also exert direct effects on brain cells, including neurons, astrocytes, and neural stem cells, and in this way stimulate neural plasticity and promote recovery of brain function. Immune system activity declines as we age, and the resulting imbalance could be one reason for poorer recovery from brain injury in older people and for the age-related decline of perception, motor behavior, cognition, and memory function.

In summary, brain injury affects both neural and nonneural cell populations in the brain and causes cell death as well as cellular dysfunction, the latter not only in the areas directly affected by the primary injury but also in more remote brain regions. Although the brain’s repair capacity is limited, the injury-induced increase in neural plasticity is important in the recovery of function. The right timing of any intervention, aligned with the neurobiological processes that take place in the injured brain, is critical to the outcome. Astroglial cells and the cells of the brain’s and body’s immune system emerge as novel and important targets for future therapeutic interventions in situations such as neurotrauma or stroke.