Back to Parent Page
HomeArticlesTargeting Mitochondrial Dysfunction in Neurodegenerative Disease 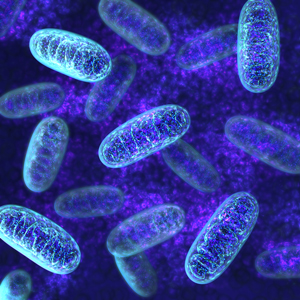 It’s long been known that the brain is an energy glutton:  Most estimates suggest that it requires about 20 percent of the body’s total energy stores to work effectively. That energy is produced by mitochondria, specialized rod-shaped organelles in every cell in the body. So perhaps it is no surprise that problems with mitochondrial function in neurons have been linked to a host of progressive neurodegenerative disorders—one of which is Friedreich’s ataxia, a rare but devastating disease that progressively kills off nerve cells in the brain and spinal cord. Now, scientists at the University of California, Davis have identified how frataxin, the gene that causes Friedreich’s ataxia, affects mitochondrial function. That understanding may lead to new, more effective potential treatments for Friedreich’s ataxia as well as other forms of neurodegenerative disease.

Open any middle school science book and you’ll see mitochondria described as “cellular powerhouses.”  And rightly so:  These small organelles are responsible for producing adenosine triphosphate (ATP), the molecule that supplies energy to the cell and, consequently, to the brain and the body.

“You can think of mitochondria as factories that produce energy in cells,” says Tetsuo Ashizawa, a neurologist who studies the mitochondrial dysfunction of neurodegenerative diseases at Houston Methodist Hospital. “They are particularly important for cells which have higher energy demands. The brain is one of the highest energy-demanding tissues in the body, constantly generating electricity across the organ so neurons can communicate with one another across the organ. So when mitochondria are corrupted, neurons are particularly susceptible to damage.”

Mitochondrial dysfunction can result in neurodegeneration in additional ways, as well, says Giovanni Manfredi, a researcher at the Brain and Mind Research Institute at the Weill Cornell School of Medicine.

“Neural degeneration can be caused by primary mitochondrial defects like you find in genetic diseases that affect mitochondrial proteins or enzymes. And the primary issue there is largely due to the inability of mitochondria to produce enough energy,” he says. “But mitochondria also do a lot of other important things beyond making energy. They mediate cell metabolism—making amino acids, destroying amino acids, making the substance to make nucleotides. They help buffer calcium, which is an important cellular messenger. They can promote apoptosis, or programmed cell death. It’s kind of paradoxical, because mitochondria are the provider of life for the cells. But they can also act as the executioners of brain cells when they are sick.”

In 1996, scientists discovered that Friedreich’s ataxia, a rare genetic disorder that leads to progressive damage to the brain and spinal cord, was the result of a specific mutation to the frataxin (FXN) gene. Approximately 6,000 people in the US have the disease; there are currently no Food and Drug Administration (FDA) approved treatments and most people diagnosed with it die before they turn 40. Gino Cortopassi, a biochemist at the University of California, Davis School of Veterinary Medicine, wanted to see if they could identify possible drug treatments.

“It’s a horrible, horrible disease,” says Cortopassi. “And it’s an ‘orphan’ disease, with no reliable treatments—most mitochondrial diseases are—so we wanted to see if we could find something that might help.”

While scientists understood that the FXN gene mutation led to Friedreich’s ataxia, they did not know how the reduction of a single protein led to its myriad symptoms. Cortopassi and colleagues looked at the effects of FXN deficiency in a mouse model of the disease, in blood collected from patients with the disorder, and from fibroblast cell models. They found that the lack of frataxin results in a significant decrease in mitochondrial levels.

Cortopassi and colleagues then tried to restore the balance by repurposing FDA-approved drugs that are currently used for a variety of other medical disorders. They found that a drug called dimethyl fumarate (DMF), currently used to treat multiple sclerosis, also increased frataxin—and the number of mitochondria—in cells treated with the drug. The results of both studies were published in April 2017 in Human Molecular Genetics.

“This is a drug that induces mitochondrial number and function. And it’s possible that it could be applicable beyond Friedreich’s ataxia,” says Cortopassi. “Multiple sclerosis is another neurodegenerative disorder with a deficiency of mitochondria. And when treated with this drug, we saw an increase in mitochondrial number and gene expression in the white blood cells of MS patients, too.”

Cortopassi hopes to take DMF to clinical trial for Friedreich’s ataxia patients soon. He also thinks measuring mitochondrial number could be an important biomarker to test the efficacy of treatments for other neurodegenerative disorders as well. Manfredi agrees.

With a simple blood draw, one could count how many mitochondria are in the platelets. “Because platelets are generated from mitochondrial sets in the bone marrow, once the cells are exposed to the drug, you should see more mitochondria—which would be an easy biomarker to see if the drug is working.”

“Unless we can shut down the root cause of these disorders, increasing the number of mitochondria can only be a palliative treatment at best,” he says. “But for diseases like Friedrich’s ataxia, where the problem is directly linked to mitochondria, this kind of approach has a great deal of promise.”