Speaker Matthew Fink, M.D., Neurologist-in-Chief at New York-Presbysterian and chairman, neurology at Weill Cornell Medicine, has participated as a panelist for SA&YB programs multiple times and has also frequently spoken at Marlene Meyerson JCC Manhattan. He discussed brain function, changes in the brain as we age, memory, brain diseases and disorders, and maximizing brain function and health. 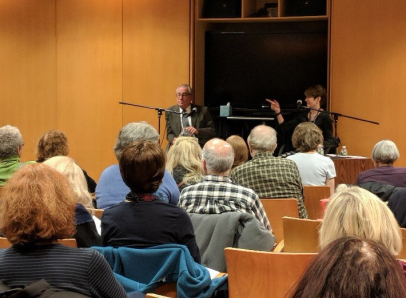 Fink explained that the brain deteriorates and improves as we age. Over time, our short-term memory (such as remembering a phone number given to us) lessens, but our ability to solve complex problems and abstract information from complex data advances. Fink advised that eliminating vascular risk factors such as smoking, physical inactivity, and unhealthy diet by age 40 and beyond can reduce the risk of stroke by 80 percent, dementia by 50 percent, and significantly lower the risk for heart attack.

Fink also spoke about the “Big Five,” or the five major brain diseases that affect older individuals (in order of prevalence): stroke, Alzheimer’s disease, traumatic brain injury (TBI), epilepsy, and Parkinson’s disease. TBI is much more common in elderly individuals, only a a small percentage of young people (football players and other athletes) have high rates. The high rate for seniors is mainly due to falls becoming more common as we age. Epilepsy is also more common in older adults and can develop later in life. Correctly identifying, preventing, and treating these conditions can prevent cognitive decline, dementia, and preserve independence as we age.

At one point in his discussion, Fink stressed that even if one does develop a brain disease or disorder, mental health can play a vital role in one’s quality of life and the disease outcome. He gave the example that both his father and aunt developed Parkinson’s disease but managed the disease very differently. His father remained active and frequently went for walks, using a shopping cart for support on his strolls, while his aunt became very self-conscious, discontinued going out, and remained isolated at home. Since depression can be caused by dementia and cause dementia symptoms to worsen or become more severe, a person’s mental state should be evaluated regularly, Fink said.

Fink also gave a simple rule for how to maintain a brain-healthy diet–eat “real food” that is colorful.  “Real food,” he quipped, is “whatever your grandma would consider food” and does not come pre-packaged. Fresh vegetables, fruits. and other whole foods of varying hues with a small amount of animal product comprise a healthy diet, he said, The aim, he argued, is not to be on a “diet” but, to eat “real” food.

The program wrapped up by giving a quick run-down of the four factors of successful aging and a brain-healthy life: staying physically active, reducing vascular risk factors, managing diseases and drugs that may impair brain function, and keeping the brain lively with social engagement and intellectual activity, followed by a Q&A with the audience.