Back to Parent Page
HomeArticlesStimulating Rehabilitation After Stroke 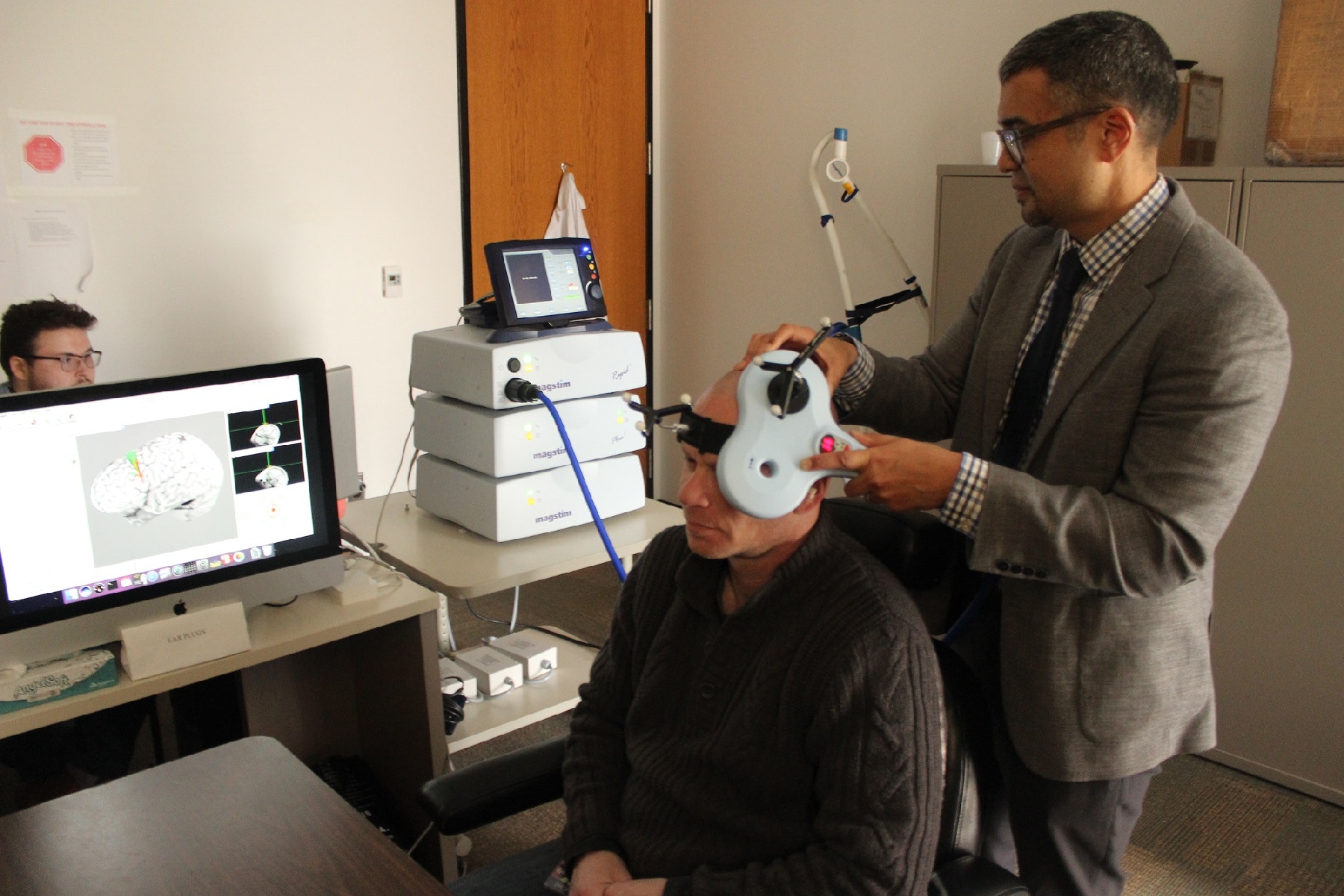 Someone in the United States has a stroke, or a medical event in which blood flow is blocked to the brain, approximately every 40 seconds, according to the Centers for Disease Control and Prevention (CDC). The prognosis after such a cerebrovascular incident varies widely, depending on the damage to the brain. Some stroke patients may be back up and on their feet within months, while others may experience significant disabilities for the rest of their lives. Roy Hamilton, M.D., M.S., a neurologist at the University of Pennsylvania’s Perelman School of Medicine, says that common wisdom suggests that functional recovery after a stroke depends on how adaptable, or neuroplastic, a person’s brain may be—yet, to date, there are no clear ways to assess that. His work is investigating whether transcranial magnetic stimulation (TMS) might offer us a way to better measure neuroplasticity in the brain’s language system after stroke—predicting which patients are more likely to make a full recovery. Here, he discusses the challenges of making prognoses for stroke patients, how new discoveries in brain science are shaping the way we might use TMS as a tool in the future, and why he sees cognitive neurorehabilitation as a form of direct translational neuroscience.

Historically, how do neurologists make prognoses for patients after stroke?

It’s fairly murky. Despite having many years of clinical experience with patients with stroke, as well as working with neurorehabilitation specialists who see patients after they’ve had their stroke, it turns out we can’t account for much of the variability. We are not as good at predicting how a particular patient will do as we would like to think. We use things like the size of the stroke, the severity of the deficits we see, and other clinical variables we intuitively think affect neuroplasticity like a person’s age, other health issues, and things like that. But even having all those factors available, we still don’t do a great job of predicting who will be a good responder to neurorehabilitation treatment and who won’t. People continually surprise us in both directions.

Why think TMS might offer a new way to measure neuroplasticity?

I’ve been working with TMS for about 19 years now. It is a neurophysiologic tool that can be employed in a number of different ways. When you apply this kind of stimulation to the brain, you are creating changes. You are causing assemblies of neurons to fire. And you can use the tool to cause a variety of different firing patterns, some that elicit short-term effects and some that elicit effects that endure longer.

We think some of those enduring effects seen in the literature are related to the kinds of changes associated with natural change in neuronal systems, like long-term potentiation or long-term depression. One thing that we’ve observed with TMS is that things that seem to make a difference with respect to neuroplasticity also seem to make a difference with respect to some of the outputs you get from TMS. By that I mean you can demonstrate that responses to TMS, for example, are different over the age spectrum, or are different as a function of certain genetic variants thought to be related to neuroplasticity. So, based on that thinking, one might imagine that a patient’s response to TMS, or how easily one’s brain is perturbed by TMS, could be conceptualized as reflecting some type of marker for neuroplasticity.

You are testing a type of TMS called theta burst stimulation. What is it? And why think it might be a marker for neuroplasticity?

You decided to test the theta burst on aphasia, or the loss of ability to understand or express speech. Why?

You found some remarkable preliminary results. Did they surprise you?

We found that we could look at some factors we have previously thought would predict plasticity, like certain genetic markers, and were able to find they have a fairly remarkable influence on the baseline states of individuals in terms of their brain’s responsiveness to TMS. Brain-derived neurotrophic factor (BDNF), for example, was one of these genes. This is a gene that is strongly linked to neuroplasticity and we saw it influenced the amount of change induced as a result of stimulation. So, if we reflect on the idea that things that predict plasticity in the brain seem to have a direct effect on how TMS will affect the brain and how much it will be able to perturb the brain, this is a pretty big deal.

For next steps, we want to take the stroke patients with aphasia in whom we have been applying theta burst stimulation and compare them against a computer model that takes into account all the factors that we currently think of as contributors to aphasia recovery—lesion size, lesion location, age of the patient, and all the other things we know from clinical experience that affect recovery. If we can make a model of all those things, we should be able to better account for patients whose recoveries aren’t well predicted by the model once we’ve factored in their TMS response. That’s our ultimate goal.

You’ve been working with TMS for almost two decades, as both a research tool and a treatment. Have we tapped its full potential?

I can imagine a couple of different ways that TMS might have more potential in the future. There are TMS approaches now that are able to overcome the technique’s limitation of only being able to stimulate the surface of the cortex. There are now new coils that can aim deeper than that, giving us more targets to potentially hit with stimulation. That’s a very practical way in which TMS will likely advance further in the future.

But another interesting way TMS is likely to continue to advance in the future is that its flexibility and utility increases or changes depending on how we conceptualize and represent the brain. You’ve got this tool that can focus on and manipulate different centers in the brain. Its utility depends critically on where you’ve decided to stimulate and for what reason. When I started with TMS, we were looking at blobs of BOLD signal change to guide us—we wanted to stimulate regions we thought were responsible for specific functions. Now that we understand more about what those patterns actually represent and have tools that can look at brain activity with more subtlety and higher resolution, we can change our focus to the connectivity between different brain centers.

As we think more in terms of networks and dynamic and static connections between those networks—understanding that it’s the connectivity that mediates function—we can consider different approaches to use neuromodulation. As our metaphors for how the brain works change, so do the hypotheses we can test. And that’s another area where my lab is moving. We are trying to use network neuroscience to figure out if we can use connectivity to better determine where to stimulate people for better therapeutic effects after stroke.

What, ultimately, through this study and others, are you hoping to achieve for your patients?

The overarching goal of my research is reasonably straightforward. I view cognitive neurorehabilitation as a sort of translational cognitive neuroscience. By that I mean, when most people describe translational science, at least in medical school, people imagine the traditional bench to bedside approach. They often don’t consider cognitive neuroscience in that mix because it deals with living, breathing human beings instead of chemical compounds. But what we are doing is translational, too. We are taking basic concepts from cognitive science, learning more about how the language system works, and how brain plasticity works, and then directly translating them for use in patient populations.

What we do a lot in our laboratory is to try to use brain stimulation in conjunction with imaging and other tools as a way to elucidate normative structure-function relationships in the brain that we still don’t understand very well. Once we feel like we revealed something, we can then see whether abnormal brains differ from normal ones in terms of the way they implement certain cognitive operations. Once we understand those differences, we can then use neuromodulation to try to make those systems more resemble normal systems in some meaningful way, or just make them operate so their function is more like normal system function. Simply put, we are trying to develop insights that we can import into patient populations to see if we can remediate deficits in cognition related to stroke or other neurologic disease.