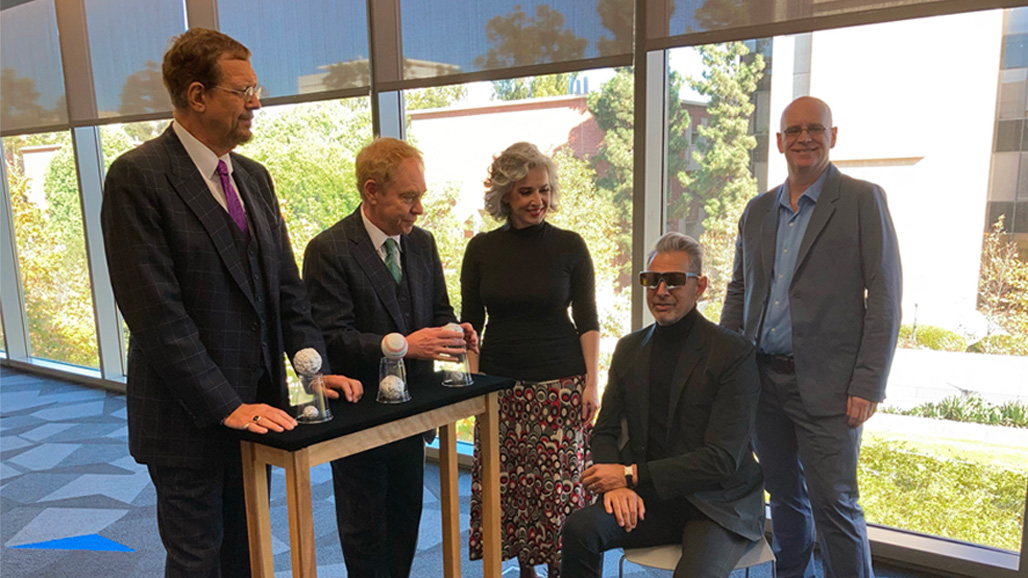 Magicians Penn and Teller and researchers Susana Martinez-Conde and Stephen Macknik participate in an episode of “The World According to Jeff Goldblum” on “neuromagic” that is scheduled to be shown on Nov. 12. Goldblum is seated and wearing an eye tracking system Macknik uses for research. Photo courtesy of Alana Moreno

Each year, the Society for Neuroscience recognizes outstanding neuroscientists who have strongly added to public education and awareness about the field. The Dana Foundation sponsors these awards. This year’s award was presented to Stephen Macknik, Ph.D., Professor of Ophthalmology, Neurology, and Physiology & Pharmacology, SUNY Downstate Health Sciences University.

Q: Was it a conscious decision for you to do a lot of education and outreach, as well as research? 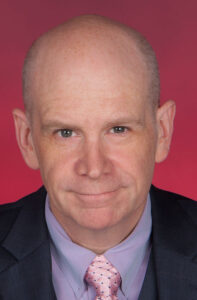 Dr. Macknik: I’ve wanted to participate in outreach since the beginning. My interest in studying visual neuroscience stemmed from reading a Scientific American article in college about the work of Margaret Livingstone and David Hubel at Harvard Medical School. The narrative they spun about the inner workings of the visual system motivated years of study for me throughout college—and beyond. They eventually became my graduate and postdoctoral advisors!

While learning at the knee of these two giants, I began to realize that our roles as academics is first to have an impact on society. Some do that by teaching students. Some conduct research, pushing back the boundaries of the unknown. Some do clinical, engineering, or commercial tech transfer and bring knowledge to the public in an applied manner. Some do a mix of all of these (like me). But directly teaching the public through outreach is perhaps the most direct way to impact the minds of the people who pay for the creation of knowledge. Marge and David taught me by example to regard high-quality, accurate, scientific outreach as a sacred responsibility, and it was very much a conscious decision to follow in their footsteps.

You write books and magazine columns, as well as speak to large non-scientist audiences.  What is most satisfying about each approach?  What was most surprising?

Although each of these modalities are important and satisfying in different ways, they all have the power to inspire an audience by surprise. A spectator in any one of these modalities may not have ever realized that they care about how a visual illusion works in their brain, for example. But when they discover that they do care, and they want to know more, it thrills me in a way that none of my other academic responsibilities can match. The delight that I witnessed in my audiences when they experience that inspirational Aha! moment—I was surprised to discover—is what I live for. One gets this feeling in academic teaching too, but not quite with the same level of emotion, because students are typically not very surprised that they are learning from a specific topical lecture.

The differences between these modalities are that magazine articles have an immediacy that exceeds that of books, but which have more gravitas than something one might say to a crowd. Books have staying power that is unmatched by magazine articles (which, unlike academic journal articles, are rarely referred to later), but books cannot hold the attention of their readers with the same intensity as a face-to-face meeting. Public speeches, radio, and TV appearances are equivalent to mainlining knowledge directly into the grey mater of the audience, which is a massive ego boost and one hell of a good time for the speaker—so much so that I’ve always thought I should have an assistant standing behind me on stage, whispering into my ear, “memento mori!”—but I’ve always felt that speaking engagements don’t drive the same information retention in the audience as a book or magazine. But why specialize? As an academic, you can do them all.

Has your outreach changed this past year?

There have certainly been fewer public appearances than in previous years, and the Covid crisis has driven the topic of conversation in all forms of science to issues related to the crisis. Mostly we have been trying to communicate accurate information about the various issues that have worried people about neuroscience issues that orbit the Covid crisis.

There is so much BS out there concerning the neuroscientific issues with Covid that it seems like science communicators have been trying to both apply the calm voice of reason to counter wingnut theories while at the same time trying to motivate certain people to ramp up the concern and take the pandemic more seriously. It’s been a bizarre back-and-forth, one I would not have previously predicted before having lived through it.

Did you have a model or a mentor for this work? Have any advice for fellow scientists on reaching out?

Besides Livingstone and Hubel, I was also inspired growing up by Martin Gardner, who had a column in Scientific American on mathematical puzzles (despite the act that I am terrible at them I do think they are very cool!). I also greatly admired Carl Sagan, who seemed to come out of nowhere when “Cosmos” first aired when I was a kid, and inspired me to wonder how animate objects like us could be made out of inanimate materials. I think these two people gave me the permission I needed to both admit that it was OK to want to think about things and to not accept dogma as sacrosanct.

Are there principles of science outreach that you have discovered that have helped you communicate with the public?

The principle that I follow in all my science outreach is that I can choose any two of these three properties in any of my science communication: accuracy, precision, and clarity—and one of the two had better be accuracy.

Precision is fundamentally important in academic paper-writing, where the purpose is to describe the border of knowledge up until this point, and how the current paper is stepping over that border to discover something new. Its purpose is to establish what the authors have discovered from what people before them discovered. Precision is critical here because the authors are quite literally claiming credit and precedence for the knowledge that they produced, and they must be correct about what it is they discovered. But a lay audience generally could not care less about who deserves credit for this axiom or that discovery. They just want the facts, clearly and concisely explained and in an entertaining format, thank you very much.

Clarity is the mortal enemy of precision—they do not mix when the precision of a scientific paper must achieve Six Sigma—so you must choose between whether you want an accurate story that is precise, or an accurate story that is clear. In my experience, most academics have a difficult time divorcing themselves from their beloved spouse: precision. It’s painful and scary to separate yourself from the comfortable knowledge that everybody in the field is getting exactly the credit that they deserve and that no morsel of knowledge could be (gasp!) misattributed. But you need to get over yourself to be a successful science communicator.

You have to remember back to when you were a childlike tabula rasa: when you didn’t care who discovered what, just what it all meant. How can you communicate this story more clearly, you must say to yourself, and damn the precision!