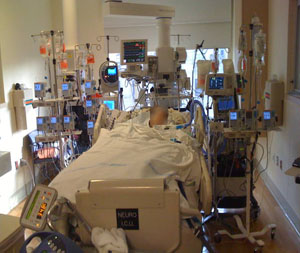 Your team is pioneering a new approach to tracking brain function in patients with critical neurological injuries. What is different about this so-called “multimodality monitoring” approach?

Stephen A. Mayer: Neuro-critical care is a relatively new specialty that focuses on resuscitation and support of people who have suffered catastrophic brain injuries, usually some form of massive stroke, trauma, seizure, or paralysis. My colleagues and I are neurointensivists; essentially, what we are charged to do is to try to support people who are in a coma, to try to do damage control and help get them through it to a point that they can recover and go back to living a meaningful and productive life.

One might think that this is an impossible task given the severity of these injuries to the brain. But we have learned that a lot of our previous notions about what is possible in terms of recovery from brain injury were based on obsolete concepts—for instance, that it’s impossible for the brain to rebuild function. We now know that’s not true.

The primary form of monitoring that neurointensivists and neurosurgeons have used for 40 years is based on inserting a probe into the brain to measure intracranial pressure. That’s essential, because we know that a build-up in pressure inside the skull is the main driver of secondary brain damage. We have powerful treatments that we can use to reduce these pressure waves and prevent or avoid secondary injury to the brain. But that’s all we’ve had. Multimodality monitoring is basically a quantum leap beyond that.

How does it work and what are you measuring?

Multimodality monitoring uses highly sophisticated technology that gives us an unprecedented ability to monitor what’s happening physiologically in the brain, on a chemical, metabolic, and electrical basis. It has become the standard of care at New York Presbyterian Hospital and is rapidly becoming the standard of care around the world. In addition to measuring intracranial pressure, we insert probes into the brain that continuously measure blood flow to the brain, oxygen levels in the brain, and the chemical environment of the brain.

The fundamental molecule that is used for brain energy metabolism is glucose, and glucose is metabolized into lactate and pyruvate. When the brain is stressed and it’s not getting enough glucose or oxygen, it shifts into an emergency mode called anaerobic metabolism. This is an important indicator of ischemic injury in the brain. The more that the brain is in crisis, the lower the glucose and the higher the ratio of lactate to pyruvate, which is an indicator of a state of metabolic stress and a shift to anaerobic metabolism.

In addition to these metabolic measures, the most recent innovation involves using probes called EEG depth electrodes, which monitor electrical activity inside the brain, as opposed to traditional EEG that measures activity on the surface of the brain. This is really new.

How is this changing the care of critically injured neurological patients?
We used to be constantly reacting to secondary damage after it had already happened. Now we can actually see physiologically what’s going on. It has revolutionized how we care for these patients.

The fact that we now have access to this kind of information in real time in neuro-ICU patients exceeds what I ever dreamed would have been possible when I started my career 15 years ago. It’s really a testament to what technology can do, in concert with a lot of super-advanced computing. It’s exciting to me because it has already become apparent that having this sort of system is like a window into the injured brain. I think of it as illuminating the black box of the comatose brain.

If I were to make a prediction, I think that as we learn more about it and how to use it, multimodality monitoring is going to become the global standard of care. It’s very exciting to be on the forefront of this.

How widespread is this type of monitoring?

You can count on both hands all the neuro-ICU units in the world that have a system as advanced as ours. When you’re pioneering something like this, you have to build your own system from scratch.

We have a constant stream of physicians from around the world who come as research fellows to work with us because we have the prototype system, and there is a lot of excitement about what the technology can do. They come to us to learn the system and then bring it back to Switzerland, Brazil, Korea, and other places. It’s gratifying to see that we’re really making an impact in our field.

What are your major findings to date?

At Columbia, as we started to analyze our first 40 or 50 patients in whom we had been doing this kind of monitoring over the past three years, we made a number of very provocative initial discoveries. One has to do with blood sugar management. We were able to confirm an observation initially made at the University of California, Los Angeles that the standard way that we control blood sugar levels in the brain seems to be inadequate for the increased metabolic demands of an injured brain. That finding, published in 2009 in Critical Care Medicine, is leading us to rethink how we manage glucose in a brain injury. We don’t have all the answers yet, but this has opened our eyes and raised some important questions that we will eventually be able to answer. It has been paradigm changing.

Another example relates to a technique called hyperventilation, which is a standard measure taken to control intracranial pressure in the injured brain. We have all been taught that we should not excessively hyperventilate our patients, because the mechanism by which hyperventilation works to reduce pressure is vasoconstriction, or tightening of blood vessels. If you overdo it, you can choke off the circulation in the blood vessels too much and impair blood flow and oxygen to the brain. We have a paper in press in the Journal of Neurology, Neurosurgery and Psychiatry in which we report a previously unrecognized epidemic of central hyperventilation. This is another very interesting insight to me, because we had always assumed that it was the doctor who was hyperventilating the patient. It had never occurred to me that patients were doing this to themselves. So this is another eye-opener that is probably going to lead to changes in the way we manage ventilator support in sedation to make it safer, by recognizing and preventing this severe hyperventilation that some patients experience.

The third issue is the work with depth electrodes, which was published in the last year in the Annals of Neurology. That research showed a major new breakthrough. Like most advanced neuro-ICUs, we place EEG electrodes on the patient’s scalp and monitor the brain’s electrical activity 24 hours a day. We do this because we know there is a 20 to 30 percent chance that these patients are going to develop clinically silent electrical seizure activity and we believe this causes secondary brain damage. But for years we have worried about patterns we see on the EEG readouts that are not definitively recognizable as seizures.

Six of the first 20 patients in whom we implanted depth electrodes clearly experienced electrical seizures that were completely invisible to the standard surface EEG. We are the first site in the world to report that finding, and it is in the process of being replicated now. I was just at a conference at UCLA, where they are also using depth electrodes to monitor seizure activity, and they were showing me all of their cases. The finding is real.

What are your next steps in the development of this approach?

There are two important goals for the next five years. One is to begin to move beyond the initial observations we’ve made and conduct large studies that link neuro-ICUs around the world, so we can start to look at large patient populations in multiple centers. That is being organized now.

The other goal is to demonstrate clearly that managing patients using this technology can definitely improve outcomes. Right now it’s all very promising, but the technology is still new and not widespread enough for large studies that could prove definitively that mortality can be reduced or outcomes improved by these methods.

The first study that is going to try to show how multimodality monitoring can improve outcomes is a clinical trial called BOOST. We are collaborating with the principle investigator, Peter Leroux, M.D., at the University of Pennsylvania. The idea is to use brain tissue oxygenation as a therapeutic target in addition to standard control of intracranial pressure. We will aim to optimize the blood pressure and blood-vessel circulation to try to normalize brain oxygenation, which is really energy supply and perfusion.

How is this research serving an unmet need in clinical neuroscience?

The heart of it is this concept of “therapeutic nihilism” with neurologic injury. The conventional wisdom is that there is nothing you can do for these patients, so don’t even bother trying because it’s hopeless. We’re learning that that thinking is simply not true.

Multimodality monitoring is a pillar in a new form of activism and interventionalism in people with the kinds of brain injuries that we used to think were beyond hope. Whether it’s monitoring a comatose patient to pull them through a tough period of time, or cooling a cardiac arrest patient to improve their chances of waking up from an anoxic insult to the brain, or going into a blood vessel with interventional devices to open up blocked arteries in the first few hours after a stroke—all of these things are part of this spirit of activist intervention. It represents a fundamental shift in thinking from the old attitude, which was, essentially, why even bother, because there’s no hope.

*For a closer look at Mayer’s work and experiences as a neurointensivist, read  Back from the Brink, by Edward Sylvester.