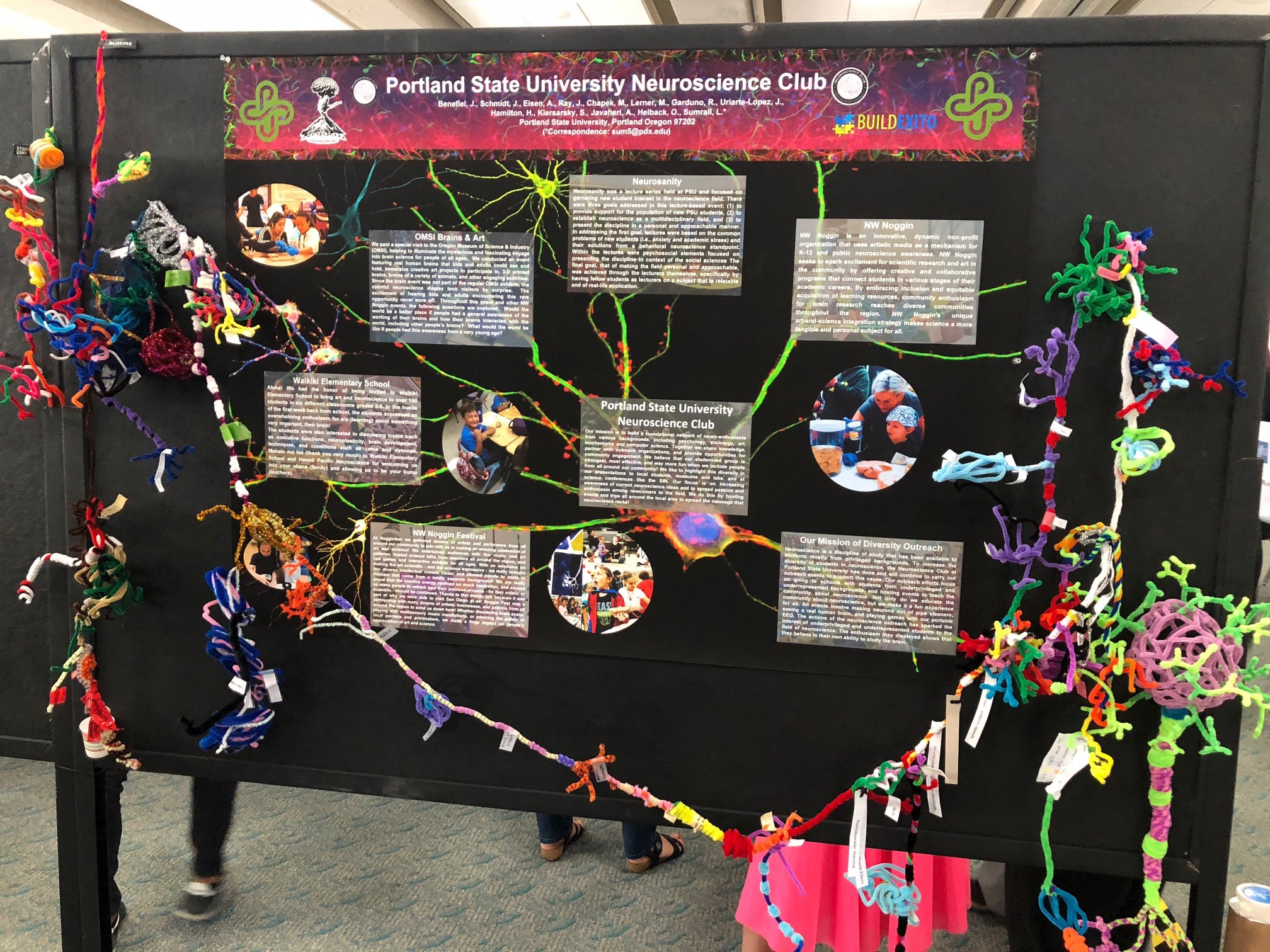 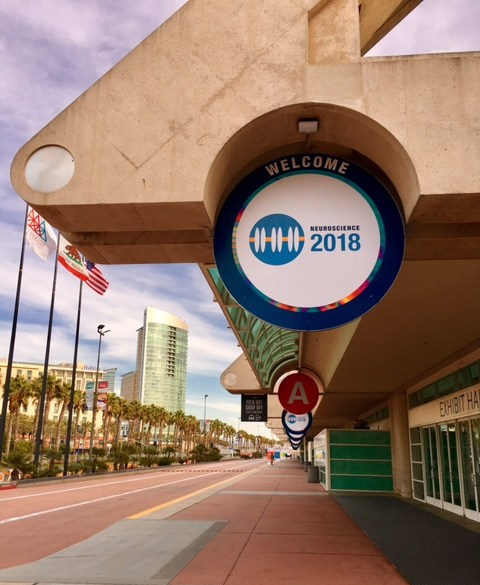 With this year’s Society for Neuroscience (SfN) annual meeting now in full swing, downtown San Diego couldn’t be more bustling. Everywhere you turn, street signs, store windows, and flyers read “Neuroscience 2018” to encourage visitors to check out at least one of the many events happening at the San Diego Convention Center.

Helping to kick off the meeting on Saturday was the Brain Awareness Campaign reception and poster presentation. Alongside the reception stage, shared by numerous Brain Awareness Week “influencers,” were aisles lined with more than 40 colorful poster boards created largely by neuroscientists at various stages of their careers to showcase their neuroscience outreach initiatives. 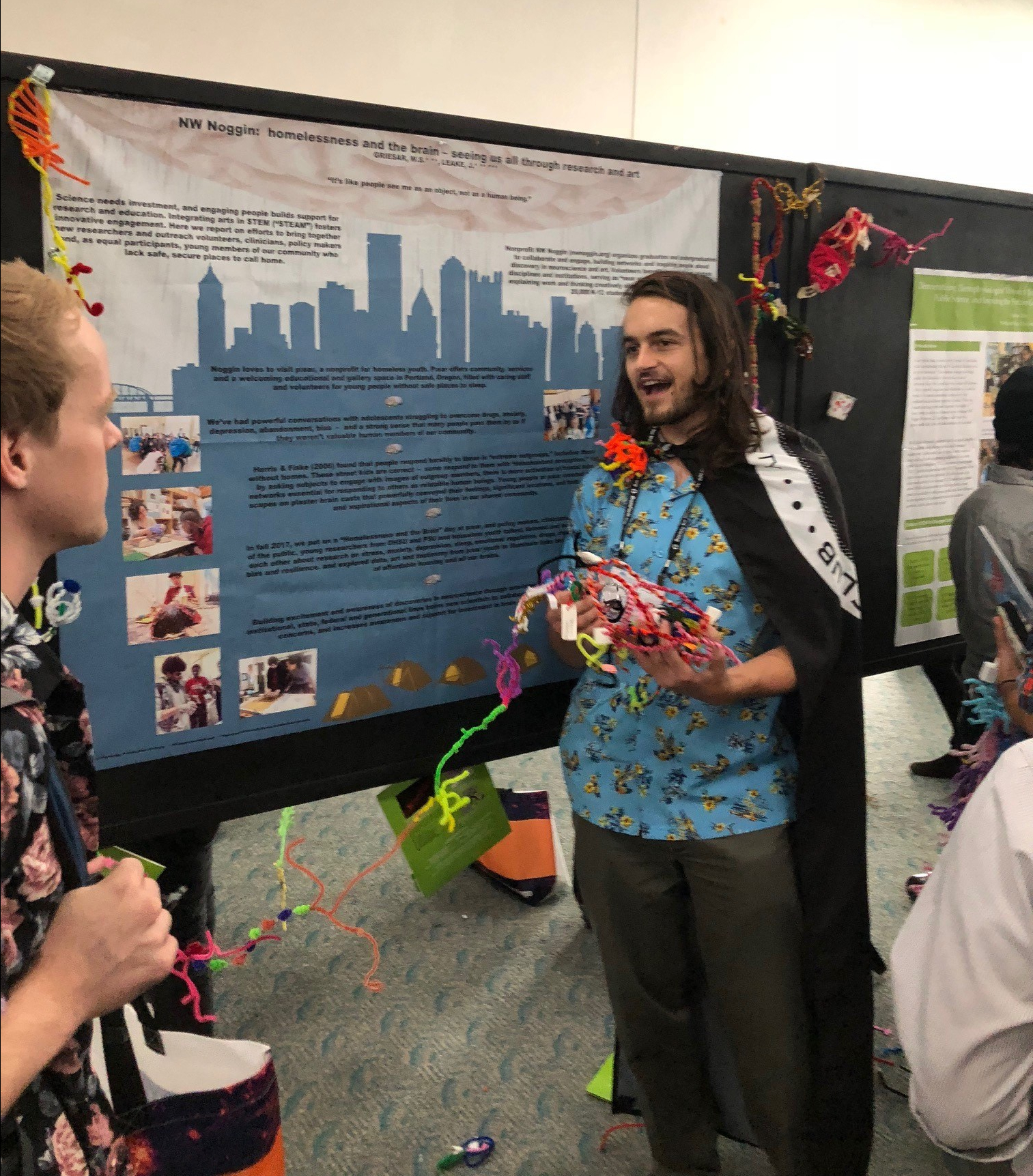 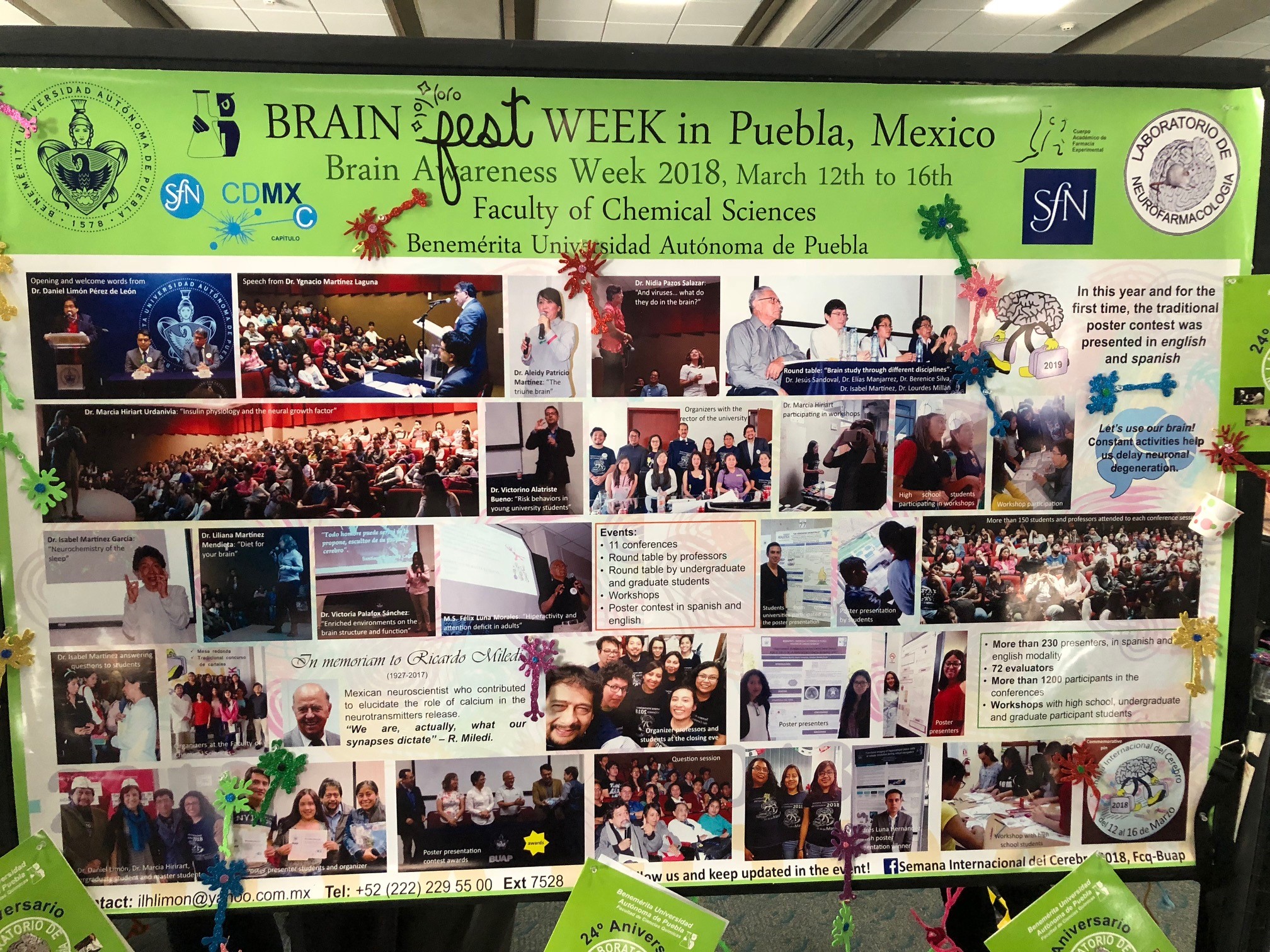 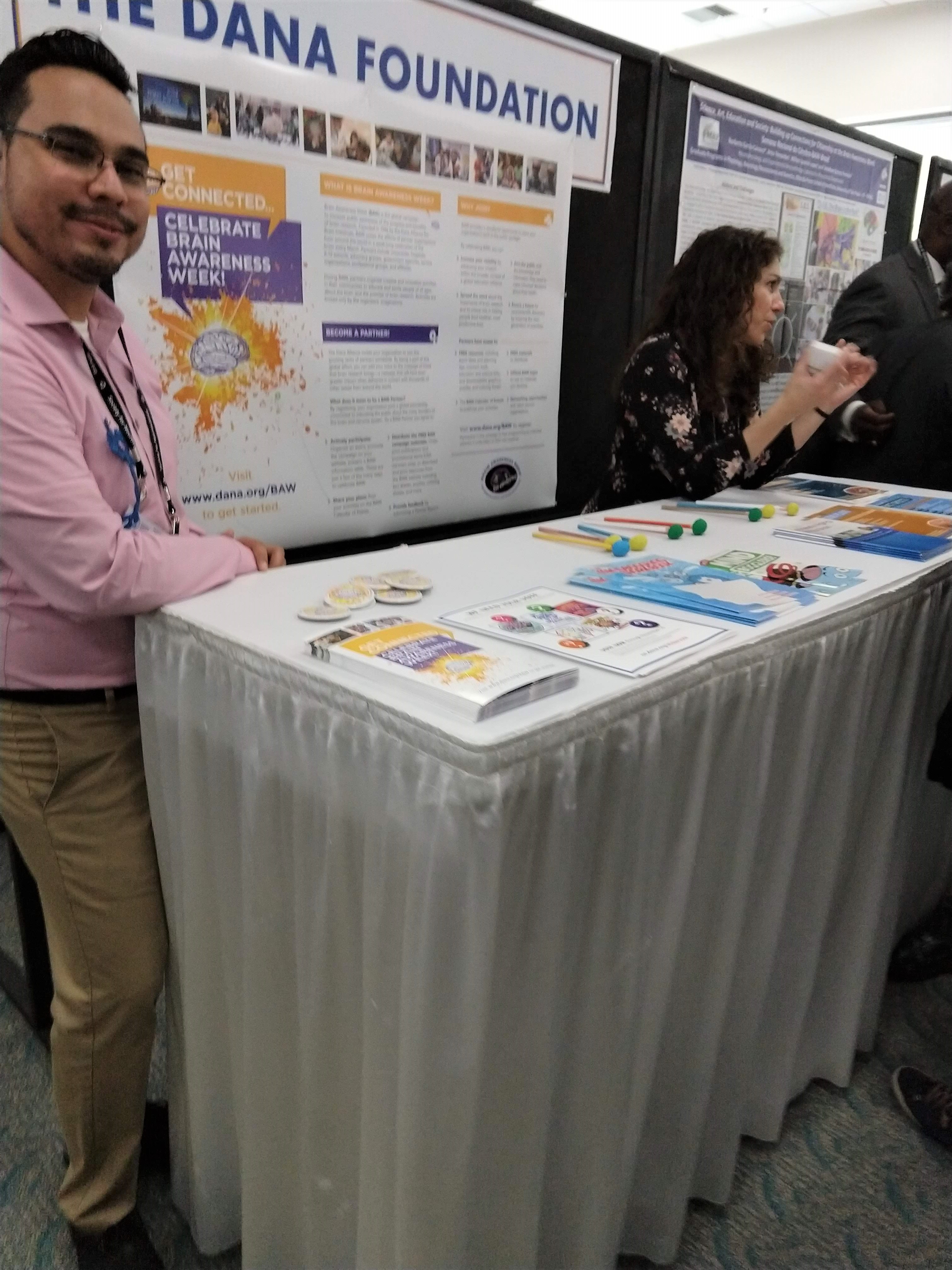 This is the 23rd anniversary of Brain Awareness Week, since the campaign was first launched by the Dana Foundation back in 1995—something SfN President Rick Huganir acknowledged during his welcoming remarks. Huganir applauded everyone in the room and their ability to harness collective resources to share powerful messages about the brain with the public.

A perfect example of this type of outreach was presented by Bradley Allf, first place winner of this year’s Brain Awareness Video Contest. His video, “I Think, Therefore I Sleep,” explores one process by which sleep is thought to play a role in properly regulating synapses. [youtube https://www.youtube.com/watch?v=JjuOUQh58V0&w=560&h=315]

The impactful role sleep plays in cognitive function was also addressed by NW Noggin co-founders, Bill Griesar and Jeff Leake, during their keynote address. Since its start in 2012, the Portland-based volunteer organization has expanded into a nationwide effort that informs people of all ages about the brain.

In addition to holding assemblies and demonstrations in public schools, the group focuses a large part of their outreach on areas that don’t have access to many extracurricular educational programs. Griesar and Leake spoke about their work with homeless or displaced youths, as well as visits to correctional facilities. “What we found is that, like everyone else, they’re intensely curious about the things that affect them,” Griesar said. These things include lack of sleep, causes of addiction, and the effects of trauma on the brain.

The dynamic duo showcased their signature pipe cleaner neurons and some 3-D printed brains, which they  develop with a local tech company in Oregon. (The brains are printed to show grey and white matter, based on real MRI data from Oregon Health & Science University.) Concluding their presentation, they addressed the many neuroscientists in the audience: “Just go out there and do this. The work you do is really interesting, and people want to know about it,” Griesar said. Griesar and Leake are prime examples of just how much you can accomplish. 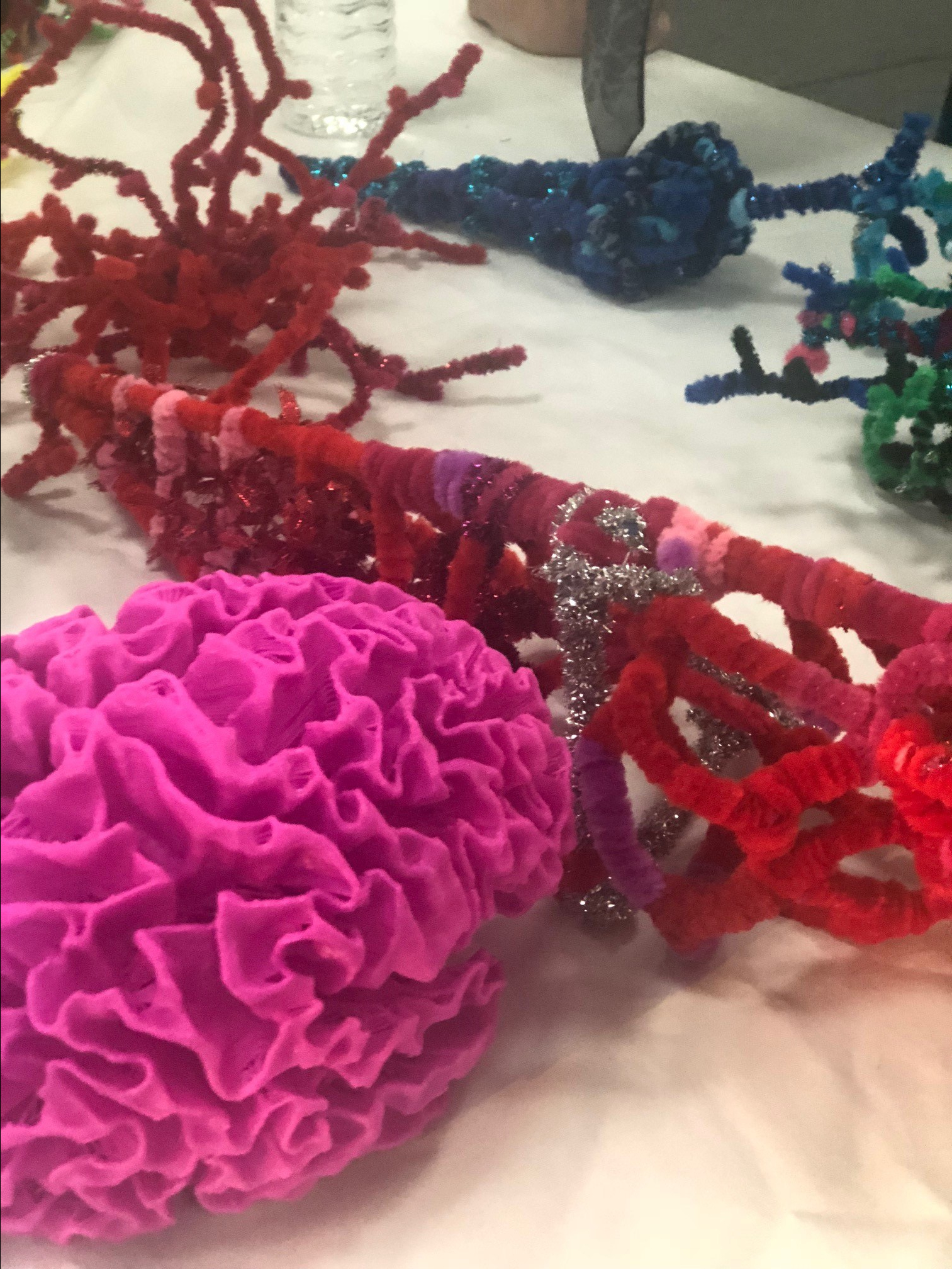 Other champions of neuroscience outreach recognized at the event included Hewlet McFarlane, President of FUN (Faculty for Undergraduate Neuroscience) and Norbert Myslinski, founder of the annual USA Brain Bee. Now celebrating its 20th year, the Brain Bee has since expanded into a global educational outreach initiative.

For a closer look at the Neuroscience 2018 program, visit SfN’s website. You can also read about the “Music and the Brain” event we covered, featuring legendary jazz guitarist Pat Metheny. Check our Twitter for real-time updates from various events and Instagram for a behind-the-scenes look at our time here.r