Back to Parent Page
HomeArticlesSeries Combats Disorders: First Up, Epilepsy 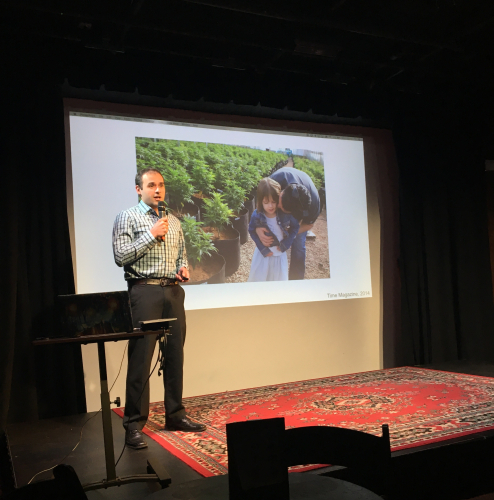 People with epilepsy were once thought to be possessed by demons or evil spirits. Dubbed “the sacred disease,” epilepsy was profoundly misunderstood for centuries, even after the disorder was explained to be of human origin. So why is it, so many years later, that epilepsy is still not fully understood? And why is there still so much stigma attached to a disorder which affects approximately one in 26 people in the United States?

Caveat NYC, BraiNY, and the Epilepsy Foundation are attempting to eliminate that stigma. Last week saw the first part of a three-part event series, titled “A Lot On The Mind: Epilepsy.” Held at Caveat at 21 A Clinton St. in Manhattan and open to the public, tickets are $15 each. Each event in the series is hosted by Stephanie Rogers, a Ph.D. candidate at New York University and an adjunct instructor at Fordham University. The series focuses on educating and demystifying misconceptions on epilepsy, autism, and Huntington’s Disease.

Rogers, whose sister suffers from untreatable epilepsy, began by showing slides that explained the origins and causes of epilepsy. They include brain infection, head trauma, brain tumor, and stroke, as well as a genetic link. However, as Rogers explained, the cause of epileptic seizures remains a mystery in many patients.

Our brains contain billions of cells, and those cells “talk” to each other in very complex ways that are referred to as networks, Rogers explained. A seizure occurs when those cell conversations become synchronous, kind of like when a full football stadium of fans start to chant. Depending on what part of the brain the chanting cells are in will determine what the resulting seizure will look like. The type of seizure most often depicted is called a grand mal seizure, which means the entire brain is affected by the cell chants. However, this is one of several types.

Rogers showed two video clips of her sister having seizures. In the first clip,her sister appears to be daydreaming. Called an absence seizure, this is another type of generalized seizure that usually causes staring off into space. Because it can easily be mistaken for lack of focus, these seizures often go undetected, especially in children. In the second clip showed Roger’s sister is having a complex partial seizure, which means that only a few parts of the brain have been affected. Once again, this seizure could be mistaken for a nervous tic or even a mild panic attack, cementing Rogers’ point that the common portrayal of all seizures as being grand mal can be mar treatment.

After a bit more explanation of the parts of the brain and a demonstration on proper first aid for both partial and general seizures, Simon Chamberland, Ph.D. discussed the effects of cannabidiol (CBD) on epilepsy. He told the story of Charlotte, a young girl who used medical marijuana to treat her seizures, leading to a strain of the plant being named “Charlotte’s Web.” Chamberland considered a fairly recent study from The New England Journal of Medicine that demonstrated CBD’s benefits to patients with epilepsy. He explained that CBD regulates the electrical impulses that occur and help break up the synchrony in an epileptic brain. Although more replication is needed, he said, CBD has already been FDA-approved for two rare and severe forms of epilepsy.

The program concluded with poetry readings by Alyssa D’Amico, a Queens, N.Y. native who was first diagnosed with epilepsy at the age of six. Shortly after her diagnosis, D’Amico began writing poetry about her experiences, including various surgeries lessen her seizures. D’Amico said that she “wants to be an advocate [for epilepsy awareness] in any possible way,” which is why sharing what she’s been through is so important.

“A Lot On The Mind” will be back at Caveat on Jan. 9 to discuss autism, and on Feb. 11, to address Huntington’s Disease to complete a three-part series that will hopefully help the public understand and empathize with these neurological disorders.