Back to Parent Page
HomeArticlesSeeking Biomarkers for Alzheimer’s 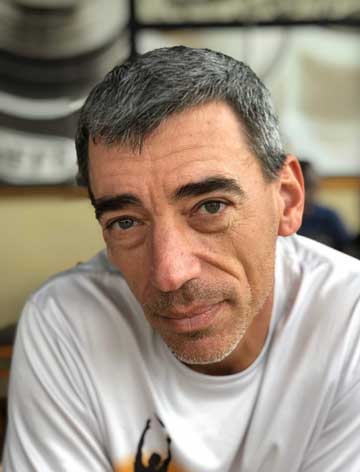 Your memories make you who you are. Built up over a lifetime, they shape how you perceive the world, how you interact with everything – and everyone – around you, and how you plan for the future. If, later in life, your ability to form new memories becomes gradually compromised, you naturally worry: is this an everyday part of aging, or the edge of something more troubling, such as Alzheimer’s disease?

Anthony Wagner, Ph.D., is a Lucie Stern Professor in the Social Sciences and Chair of the Department of Psychology at Stanford University, where he runs the Stanford Memory Lab. He has devoted his career to exploring the psychological and neurobiological aspects of learning, memory, and the cognitive processes by which we control our behavior.

Wagner is leading a project to discover how a broad range of measures – psychological and biological – are linked to changes in memory performance over time. It’s early days, but the work has the potential to identify biomarkers that reveal if someone is developing Alzheimer’s even before they show any symptoms. Such a discovery could enable earlier medical interventions, improving the outlook for people poised to be affected by the disease.

What’s the focus of your career?

My research focuses on how we build and retrieve memories. I’m particularly interested in understanding the psychological and neurobiological mechanisms that allow us to learn from experience and to then draw on that knowledge to interpret the world, to predict what’s going to happen, and to decide how best to think or act. I’ve spent 25 years delineating the mechanisms through which we acquire knowledge – how we build and manage memories – and how we remember. Until recently, my work has largely been focused on healthy young adults, including college students.

How did you get into research involving Alzheimer’s disease (AD)?

A colleague in Stanford’s department of neurology and neurological sciences had been using high-resolution structural MRI to measure the thickness of regions in the hippocampus, a key brain area for the formation of new memories. My lab had been using functional MRI to reveal the dynamic workings of the hippocampus. We struck up a collaboration to see if we could combine these measures of structure and function to build a predictive model of individual differences in memory performance, and to explore whether these measures differ in individuals with amnestic mild cognitive impairment – often a precursor to Alzheimer’s disease – relative to healthy asymptomatic individuals.

What are the hallmarks of Alzheimer’s?

There are multiple hallmarks, some cognitive, some biological. Cognitively, the typical symptom is a problem forming new long-term, autobiographical memories. If you were to visit a neurologist, they might say, “you have a short-term memory problem,” by which they mean that memory for recent events are more likely to be impaired compared with memory for events that happen years earlier. Biologically, the molecular hallmarks of Alzheimer’s include the accumulation of tangles of tau proteins inside brain cells and of beta-amyloid plaques. These molecules can disrupt communication between brain cells and lead to cell death.

Why is it important to detect AD as soon as early as possible?

To date, efforts to develop medications to treat AD have been largely unsuccessful. One hypothesis is that the healthcare profession is currently diagnosing people who are already much too far down the road for drugs or other interventions to make a significant difference. If we had a way to identify individuals who showed no cognitive symptoms but nevertheless had the disease – ideally catching individuals as early on that road as possible – this would allow for testing of drugs earlier in the process with the hope of finding effective interventions that doctors could prescribe.

Was this the impetus for your project funded by the Dana Foundation?

Yes, part of our Dana-funded study was to explore the possibility of finding an early biomarker for Alzheimer’s disease. Individuals judged to have mild cognitive impairment (MCI) are at an increased risk of developing Alzheimer’s, so our question was: “Can we demonstrate that a categorization of MCI, based on neuropsychological tests in the clinic, shows up in terms of brain structure and brain function?”

As it turned out, the evidence for that was pretty weak. So we tried a different approach, which was to ignore the clinical categorization. Here, we looked to see individual differences in memory performance could be explained by differences in the volumes of their brains – in a particular narrow band of brain tissue in the hippocampus that becomes shrivelled in people with AD – as well as by differences in brain function. That is, could the combination of these structural and functional MRI measures provide a better prediction about who’s going to perform better or worse in terms of memory?

And what did you find?

We found that while our measures of brain structure and function did not markedly differ between older adults with or without a clinical classification of MCI, using both measures allowed us to explain which older adults would express better vs. worse memory. What this suggests is that some of the people judged to have MCI may have been misclassified – perhaps they underperformed on their neuropsychological tests for other reasons, and they may well not be on a disease trajectory – whereas some of the “healthy” older adults may be neurobiologically worse off than some of those classified as MCI. While the project had a modest sample size – 43 subjects – it provided a tantalizing suggestion that we might be able to identify putatively “healthy” older adults who are early on the road to Alzheimer’s disease.

How are you building on these insights?

These initial findings led us to ask: “Can we build a predictive model of individual differences in memory, and in change in memory over time, by combining multiple variables, including behavioral, molecular, structural and genetic measures?” Ideally, such a model would not only predict how those individuals differ in terms of their current memory performance, but also how their memory will hold up four years and eight years later. During this sort of longitudinal study, changes in memory performance might indicate a clinical progression from apparently healthy to, perhaps, having MCI and, further down the road, Alzheimer’s.

So you launched a larger study?

Yes, we now have an ongoing study focused solely on “healthy” – that is, cognitive normal – older adults, 60 years and up. For this project, funded by the National Institute on Aging (NIA), we have a large sample: 200 participants. We’ve measured their brain volume, brain function, memory, genetics, blood, tau and amyloid. We’re basically done with the collection of this baseline data, and we’re actively analyzing and writing papers from this remarkably rich and unique data set. We’re also actively bringing people back after approximately four years, and as this longitudinal study progresses, there’s a chance that it will uncover early markers of Alzheimer’s disease.

The Dana Foundation grant both led us to this research path, supporting our initial study, and it also allowed us to kick off this larger study while we waited for funding from the NIA.

How did you find these 200 participants?

We’ve advertised around the broader San Francisco Bay area. Participants each came in over a number of weeks for three full days of testing, which included high-resolution structural brain imaging and functional brain imaging. They got a lumbar puncture to draw cerebrospinal fluid, to get a measure of tau and amyloid concentration. Our participants also took a battery of memory tests that are more wide-ranging than standard clinical tests. It’s a significant commitment for participants, and we’re now asking them to repeat many of these measures 3.5 to 4 years later, so that we can try to identify patterns in how memory evolves in relation to these other measures. Fortunately for us, they are a highly motivated and generous group of individuals.

What’s driving them – is it paid?

We provide modest compensation, but they’re not showing up for the money, let me tell you. It’s often people with a loved one or friend that lives with Alzheimer’s. Or they themselves might be worried about their long-term health and want to contribute to research so that, through this kind of work, there may ultimately be a solution that will have a dramatic impact on millions of people’s lives.

The amount and variety of high-quality data you’re collecting make it a scientific treasure trove, doesn’t it?

It does. This has already meant that we have papers already coming out that I never dreamed of. For example, one collaborator said, “Since you’ve collected blood, let me analyze the blood for a specific T-cell immune response that we hypothesize is related to AD,” that sort of thing.

Will you be sharing your data with the wider scientific community?

Absolutely. I think science across the board is increasingly appreciative of the importance of open practices and data sharing, and my lab and my colleagues are similarly committed to sharing our data, following the publications of the key findings. We’ll be pushing our data out with cross linkages between the different classes of data. These data are so rich, and there’s so many different levels of questions one can ask. We’re only scratching the surface on some of them.

Wagner wrote in April 2019 for Dana Foundation’s Cerebrum on the Multicosts of Multitasking (with co-author Kevin P. Madore), and did an accompanying podcast