Baby steps may become giant steps in the next ten years for schizophrenia, an illness which impacts an estimated 2.4 million Americans and 1 in 100 people worldwide. While drugs have limited impact and there is no known cure, advances in genetics are opening new doors, thanks in part to an international consortium co-founded in July 2014 by psychiatric geneticist Patrick F. Sullivan, M.D., FRANZCP. In this month’s Cerebrum, “Schizophrenia: Hope on the Horizon,” the author writes about how the largest biological experiment in the history of psychiatry opened new avenues for exploring the biological underpinnings of schizophrenia  and why he and his colleagues believe, after years of frustration, that new insights are coming soon. 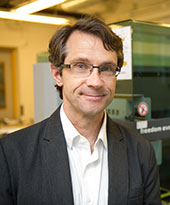 What inspired you to pursue schizophrenia?

Sullivan: Mainly because of all the conditions in medicine, there is the greatest disparity between the impact that schizophrenia has on people and on society, the huge contrast of what we actually know about it, and treatment. If there were ever the most critical unmet need in medicine, it is perhaps here.

In your early years as a researcher, were you frustrated by a lack of progress, or did you always see genetics as the new frontier of learning more about the illness?

Anyone who was in the genetic field (until recently) would have been frustrated by a lack of progress. The potential for advancement was enormous, but actually starting to tap into it was very slow and very frustrating. Not until the last five to seven years have we actually been able to know enough to design the correct studies. I’m really hopeful that we’ll make massive progress.

Your write about a boom in antipsychotic medication that occurred about ten to fifteen years ago, but that the pipeline has now gone dry due to a lack of knowledge of schizophrenia’s basic biology. As genetics seems to advance new knowledge, do you envision new medications?

That’s the ultimate goal. We see this as a two-step process: First, we don’t understand the biology well enough to enable rational drug discovery. Genetics will suggest biology and help our colleagues in academics and industry in drug development by discontinuing the serendipitous process that has characterized drug development.

There are several interesting insights that have already come out and some companies are working on new things. There’s the salience of calcium channels, for instance, which has led to a real resurgence in drug development. This was not necessarily on the shopping lists of drug companies ten years ago but I think a lot of them are paying a lot more attention to it now.

Why has the response to the Psychiatric Genetic Consortium been so successful, and do you see it being replicated in other areas of neuroscience?

When we created the PGC in 2007, we knew that in order to engage our colleagues and keep it viable for the long haul, it had to be something which could be distributed, participatory, democratic, and open. Evidence of our reasonable success lies in the fact that so many psychiatric researchers across the world have been interested in working with us. It’s become a fair playing field and researchers view that they get stuff out of it that they could not get otherwise. So I think it’s been good all around.

Do you think other areas of neuroscience could benefit from such collaboration?

Most other major disorders in biomedicine, from cancer to heart disease and most of the major neurological conditions, all have consortiums. I would argue that the approach we’ve taken is unique or, if it’s not, there are only a few other examples. That is how deeply we share. We actually put all our individual level data on the table into a common computer platform, and that allows us extremely precise control over all steps in the process. Other groups don’t do that and I don’t think they are getting as much out of the data as they can. So, yes, I think other groups could benefit if they adopted a similar model.

You write that genetics suggests that “we are now circling in on the true nature of madness.” Any predictions as to when we will know the answers?

A lot depends of how you define ‘knowing the answer.’ Clearly, right now, we have a lot of great clues about the etiology of schizophrenia. These things have not yet coalesced into a unified theory. It’s not crazy to imagine that, sometime within the next ten years, we will have a new empirical theory of why some people get schizophrenia and other people don’t. That’s the key thing we are shooting for.

Maybe my prediction is reasonable; maybe it’s excessive. Who knows? We’ll have to see. But for the first time we have a path, and it’s moving us towards that answer. If we do more, we are going to find out more, and that’s what we are intending to do.

Is there enough funding in this area to get where we need to go?

Nope. I can tell you that flat out. Funding for this is difficult. If we had funding, I might say five years instead of ten years. Obviously, I have a horse in this race but I don’t think the genetics stuff is getting as much as it needs.

Why is it not more of a priority?

The reasons for that are complicated. There’s a lot deserving projects and new initiatives: the brain project, personalized medicine, etc. Ultimately, what we’ve seen in the last ten years is a marked shrinkage of funding at the federal level at the National Institutes of Health (NIH) and the National Institutes of Mental Health, which is the main funder for schizophrenia research. Because of that, the leadership has had to make choices about what they choose to emphasize.

If this is important to you, then you really need to think hard about who you vote for. It’s unfortunate that cutting funding to the NIH is a popular thing to do. That is to the detriment to our work.