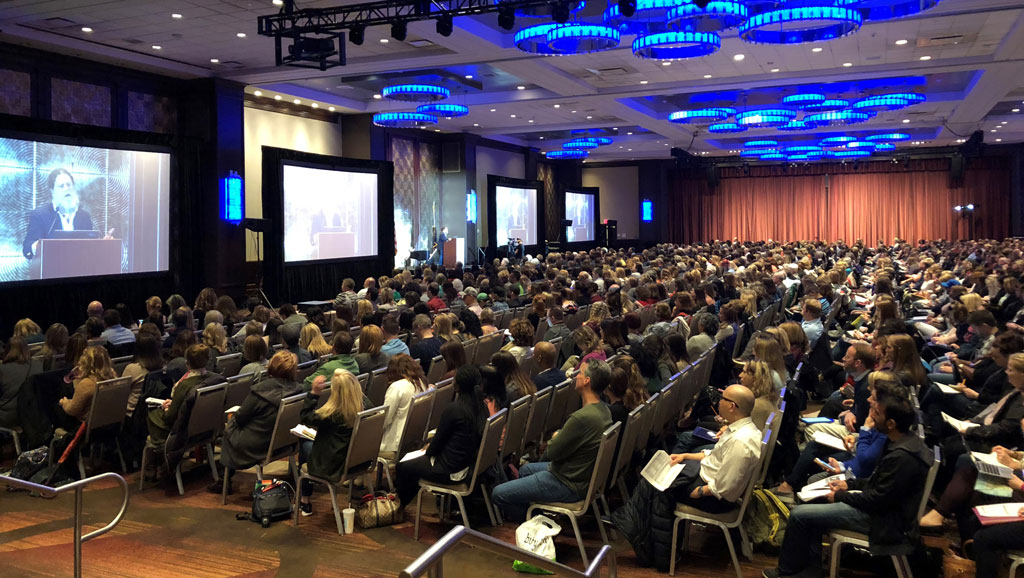 Sapolsky speaking to a packed room at the 50th Learning & the Brain conference, where more than 2,000 K-12 educators from around the world attended.

“How do we make sense of this… how do we understand the biology of it?”

In his keynote lecture that launched the “Learning & the Brain” conference in New York City last week, Sapolsky, Ph.D., professor of biological sciences, neurology, and neurological sciences at Stanford University, led his audience on a whirlwind tour of the many-layered terrain from which human acts that include “the horrific, the wonderful, and everything in between” arise.

“We’ll get nowhere if we look for one part of the brain, or one gene, or one childhood experience” responsible for brutal murder and sublime self-sacrifice, he said. “Instead, we have to do something more complicated: to ask what went on in a person’s brain in the second before; also in the minutes, hours, days before; what hormones did to make that brain sensitive. We have to go back to adolescence, to childhood, to the cultures our ancestors invented, to ecosystems, all the way to evolution.”

Among its diverse role in regulating emotion, he pointed out, the insula cortex generates gustatory disgust; it activates if you taste spoiled food. “But it mediates moral disgust as well. When we hear of someone doing something appalling, we’re ‘sick to our stomach.’ It leaves ‘a bad taste in the mouth.’ The insula cortex can’t tell the difference between rotten food and unsavory behavior.”

The danger, he said, “is the temptation to use the churning stomach as a litmus test.” We all too easily go from “different” to “disgusting,” to “wrong.”

Such gut-level reasoning is easily misled. “No brain is an island,” he said. “After giving someone something disgusting to swallow, they will advocate harsher punishment for norm violations.”  In a room with smelly garbage, they’ll express more socially conservative views.

More generally, in decisions about violence, punishment, reward and empathy, context is often key. Sapolsky summarized one study of parole decisions made by 5000 judges across the country. “The variable that best predicted whether they freed someone was how long since the judge’s most recent meal. If right after lunch, there was a 60 percent chance of parole. If three hours later, zero percent.”

What’s probably involved, Sapolsky said, is the voracious hunger of the brain circuitry that lets us see the world from another’s perspective. “But ask judges why they freed one person, not another, and they’ll talk about their judicial philosophy.”

Complexities also govern the effects of hormones, which don’t generate new drives but amplify existing ones.

Testosterone is commonly equated with male aggression. But it’s actually involved with preserving status. “The problem,” he said, is that we reward aggression with status so often.”

The story of oxytocin—in the popular version, the Jekyll to testosterone’s  Hyde—is similarly nuanced. “We attribute our best behavior to oxytocin: it promotes mother-child bonding, pair bonding, trust,” he said. “Give oxytocin to fruit flies and they sing like Joan Baez.” Actually, he went on “it does no such thing. It makes you nicer to people like you and more aggressive to ‘them.’ It exaggerates the divide.”

The development of a brain that generates aggression and niceness, of course, begins at the beginning. Childhood, babyhood, and even prenatal experience and environment don’t change the genes we’re born with, but deeply alter how and when they’re expressed. Because the effects of upbringing determine one’s own parenting practices, such influences pass from generation to generation.

Another fundamental stage in the shaping of brain and behavior is adolescence, when the frontal cortex, which among other things internalizes the ethical calculus of one’s culture, is finally sculpted. “As the last part of the brain to fully mature, it is least constrained by genes and most shaped by experience and environment.”

Still further back, Sapolsky traced the roots of our actions to the cultures developed by our ancestors, and those cultures’ roots to the ecosystems where they originated. Before that, aeons of evolution shaped behaviors key to survival, including the sense of “Us” and “Them.”

Throughout life, however, the brain’s remains malleable. “It can change in response to experience, but neuroplasticity is value-free: it can make you a better saint, or better at ethnic cleansing,” Sapolsky said.

“The single most important thing,” he said, “is that things change.”

Cultures evolve over centuries, but people can change in days, hours, even minutes. Such a dramatic shift was the Christmas truce of WWI, when a few hours’ halt in bitter trench warfare allowed both sides to bury their dead. The soldiers spontaneously extended the truce, had Christmas dinner together, exchanged addresses, and agreed to shoot over each other’s heads when fighting resumed (which they did, until dire threats from their officers got them back to the business of killing one another).

“After decades of nationalism, jingoism, military training, it just took a few hours to change who was ‘Us,’ who was ‘Them,’” Sapolsky said.

“These men had the same brains, the same biology as we do,” he concluded, stressing the need to study the science behind events like this, if we hope “to repeat such moments of human magnificence.”