Back to Parent Page
HomeScientist Q&AsQ&A with Michael Baumann, Ph.D.

In “The Changing Face of Recreational Drug Use,” the title of this month’s Cerebrum article, author Michael H. Baumann, Ph.D., a staff scientist and facility head at the National Institute on Drug Abuse, Intramural Research Program, describes the complexity of the NPS problem, what is known about the molecular mechanisms of action, and the pharmacological effects of NPS. We asked him to elaborate on the article. 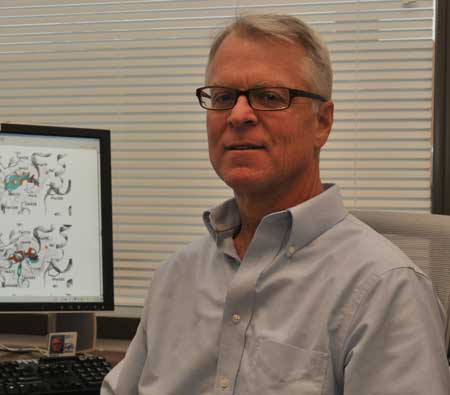 What was the impetus for establishing the Designer Drug Research Unit at the NIDA?

The establishment of the Drug Designer Research Unit (DDRU) was a direct response to the rise in misuse and availability of these substances, which was right around 2010-2011. I started becoming aware of the synthetic cathinone (i.e., “bath salts”) and synthetic cannabinoid (i.e., “spice”) situations, and went to my section chief and the scientific director at NIDA IRP to pitch the idea that I could repurpose the laboratory to start studying these designer drugs. At the time, there was little information available in terms of molecular mechanism or pharmacology or toxicology of these new substances. My superiors were, and still are, very supportive of the initiative to study designer drugs.

What classifies a drug as an NPS?

The terms “designer drugs” and “new psychoactive substances” (NPS) are used to describe newly-emerging synthetic drugs that are misused as alternatives to more traditional illicit drugs of abuse. NPS are made in overseas laboratories, and sold under false pretenses as non-drug products to reduce legal scrutiny. Compared to more traditional drugs of abuse, NPS are cheap, easy to obtain, and not detected by standard toxicology screens.

Why isn’t crystal meth mentioned in the article?

Even though it is a synthetic drug, methamphetamine (meth) is not categorized as an NPS because it has its own lengthy history. In terms of the manufacturing and trafficking, for example, crystal meth is quite different than what we see with NPS. Mexican cartels are involved with trafficking meth into the United States, whereas NPS are made in Asian laboratories, bought in bulk off of the Internet, and end up at various locations in Europe, Australia, the US, Japan and elsewhere. The buyers will package and sell them to third-party vendors, such as smoke shops, gas stations and in some cases, drug dealers on the street. Thus, the way that NPS are marketed is quite different than what’s going on with cocaine or meth, drugs that have an entrenched, illicit trafficking history.

Out of the 540 different drugs classified as NPS, which are best known?

Even though there have been hundreds of these drugs discovered, there really are only a few that are popular at any given moment. For cathinone-like stimulants, health professionals started seeing patients intoxicated with mephedrone, methylone, and MDPV in 2010-11. That was the time of the “bath salts” craze. But once emergency legislation went into effect to ban bath salts cathinones in 2011, there was an emergence of different “replacement” NPS. Information about the prevalence of specific NPS in the recreational drug marketplace can be obtained by examining data from DEA’s National Forensic Laboratory Information System (NFLIS), which reports chemical analysis of the drug items confiscated by local, state and Federal law enforcement.  Examining these data, one can see that most drugs come and go, but at the moment, ethylone and alpha-PVP are two of the more prominent replacement drugs. Ethylone, which is an analog of methylone, is being found in counterfeit ecstasy pills.  And alpha-PVP, which is an analog of MDPV, is sold as “flakka” in the recreational drug marketplace in Florida and other states. Alpha-PVP is causing a lot of problems with serious overdoses and even fatalities.

With regard to the cannabinoid-like compounds, JWH-018 and AM-2201 were some of the early “spice” drugs during 2011-2012, whereas today AB-PINACA and AB-FUBINACA are being confiscated on the streets.  Most of the NFLIS data available to the public is at least six months-old, and it’s hard to know what we will be talking about in six months or a year from now.

Has the movement towards the legalization of marijuana led to more drug abuse?

Is there any specific demographic that is drawn to NPS?

No; anyone can get them. One issue I point out in the article is that while young people can’t buy alcohol and cigarettes in stores, nothing stops them from going on the Internet and getting NPS.

How addictive are NPS, as compared to heroin and cocaine?

That would depend on the class of drug. Certainly, a potent opiate that binds to the mu opioid receptor like heroin (e.g., synthetic fentanyl derivatives) would be very addictive. Similarly, drugs that interact potently with the dopamine transporter like methamphetamine and cocaine (e.g., MDPV and alpha-PVP) would be very addictive drugs, where the propensity for binge misuse often leads to dangerous symptoms requiring emergency medical care.

You point out that NPS are not detectable through toxicology screens. Is that something the NIDA or anyone else is close to rectifying?

Absolutely. There are many forensic toxicologists who are working on this problem right now. We need forensic assays to detect NPS in biological specimens. The standard toxicology screen is an immunoassay that is sensitive to a panel of the more traditional drugs of abuse like cocaine, heroin and methamphetamine. All of these newer drugs, because they’re coming fast and furious, would add a significant number of different drugs to the standard toxicology screen. There are companies trying to develop broad spectrum immunoassays to detect designer drugs. However, because the drug landscape is changing so quickly, it becomes difficult to get detection of all the relevant substances in a single assay.

What’s going on around the country is that various labs are developing more sophisticated analyses, such as LC/MS-MS (tandem mass spectroscopy) methods, to be able to detect NPS and their metabolites. In fact, Dr. Marilyn Huestis and her colleagues at the NIDA IRP are important collaborators with the DDRU, and are leading the way in new assay development.

But in most clinical or hospital settings, such sophisticated instrumentation and methods are not available. We are definitely playing catch up in this regard.

With that said, scientists are making a lot of progress on developing assays. It’s especially complicated for the synthetic cannabinoids—as soon as these substances are smoked—the parent compound is rapidly transformed by liver mechanisms to a variety of metabolites found throughout the body. When you look for the parent compound in urine, it won’t be present.  So, a major challenge is determining the metabolites of given drug once it enters the body, because we don’t have much information in humans (there are no controlled clinical studies in humans). The only information that we have from humans is from hospital admissions, for example.

You write that controlling NPS abuse will require international cooperation. Has there been any recent progress on that front, or are there any movement towards increasing enforcement on the Internet or on a global level?

I think it will be difficult to control Internet commerce. A more reasonable way of stemming the tide of drugs from Asian laboratories is to have a  coordinated effort amongst all of the governments involved on a global scale, and get assurances from those countries that are making these products that they’ll stop people from doing it.

Of course, this is a sensitive political issue that has to be addressed through proper diplomatic channels. Nevertheless, there is some indication that the Chinese government has made many NPS illegal with recent legislation, which means that the companies formerly making those drugs will no longer be able to legally do it. Such legislation could have profound implications for the availability of these drugs.