According to the Centers for Disease Control and Prevention, doctors in the United States prescribed enough painkillers in 2010 to “medicate every American adult around-the clock for a month.” That same year, Fortune magazine reported that opioids generated $11 billion in pharmaceutical revenues.  The current state of dependence is covered in “Prescription Drug Abuse: No End in Sight,” this month’s Cerebrum article. Our author, Theodore J. Cicero, Ph.D., traces the history and evolution of narcotics and leans on his own research, clinical, and Food and Drug Administration (FDA) experience to discuss an issue that many feel has reached epidemic proportions. 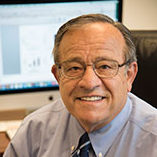 I came to Washington University in 1968 with the idea of studying the effect of drugs on brain chemistry and how the brain changes when certain drugs are introduced. There is no question that tolerance and dependence are brain based, and mechanisms in the brain lead to craving and the whole cycle of dependence. In 1970, I started working with animal models, looking at the effects of opiates, as well as studying the endocrine system and hormonal changes that take place. Hormones are good mediators of long-term changes in the brain and would be excellent candidates to induce some of the changes seen with tolerance and dependence.

In 1985, I became chairman of the Drug Abuse Advisory Committee (DAAC) for the FDA, and served in that capacity till 1993. The committee was charged with evaluating all new analgesics that had potential for abuse. It was fascinating to listen to the back and forth between the drug companies and the FDA. Once we heard from both of them, the committee looked at the data and considered the probability of abuse. Our recommendations walked the line between the company and the FDA claims. If we approved a drug, we recommended where and how drugs should be scheduled and what marketing controls should be imposed, if any.

Around 1993, there was talk about the introduction of extended release formulations of opioid products. At the time, there were very few once-a-day medications on the market for chronic pain; they were thought to be useful since you only had to take one or two a day, an advantage, particularly for the elderly or infirmed. However, we didn’t realize at the time the danger they would pose in terms of the amount of drug one would need, even with a good delivery device, and how quickly the drug could be extracted. People could get access to the pure form of the drug very quickly and abuse soared.

Once I left the FDA, I began to work with pharmaceutical firms to help them meet the mandates from the FDA for Phase 4 studies to measure actual abuse of newly approved drugs that were scheduled on the basis of pre-clinical and clinical abuse liability testing, but not the “real” world. The government decided to be proactive, and I got involved in post marketing efforts and surveillance studies that could monitor abuse in real time after a new drug was released.

You write that the neurobiological reasons for cravings are largely unknown. Do you have any theories?

Craving has a lot of subjective meaning. When you try to reduce it in biological terms, it’s very difficult. It’s like reducing a thought to biology—very difficult. Dopamine-containing and other reward pathways in the brain help us cope with stressful situations and give us pleasure or relieve unpleasant situations. If you look at it from an evolutionary point of view, take someone who smashes his or her foot. The pain is temporary; relief kicks in at some point. This is the body adapting; there’s a nice homeostasis to where things are on a pretty even keel.

Another example: People who run experience a runner’s high. They get this euphoric property, and this seems to be a built in feature of the reward systems in the brain that makes things pleasurable for us and certain things unpleasurable. Why and how the pathways are triggered exactly is unknown. I think we will know at some point.

To a point. Clonidine and a few other drugs will help take the edge off, but there’s really nothing that eliminates it. That would be the golden drug, if it could be developed. Some people might argue that there are drugs out there, such as naloxone or naltrexone, which block the effects of opiates and reduce craving. I don’t subscribe to that view. Even when the effects are blocked, people still long for the drug.

What about Zohydro ( hydrocodone bitartrate), a new painkiller recent approved by the FDA?

The committee that I once chaired voted against it and the FDA still went ahead and approved it. The theory was that there are more drugs needed for chronic pain. When you rotate opioids, the thinking is that they work more effectively. The committee’s main concern was that you now have a huge amount of hydrocodone in these extended release capsules that are begging for abuse, just like with OxyContin. Moreover, there is very poor clinical evidence that any of these drugs are useful for chronic pain, and that any benefits outweigh the many risks. So I think the FDA’s decision was premature and, frankly, wrong.

In my estimation, the ultimate solution is to figure out why less than 10 percent of the population who take drugs like them, while 90 percent of the population finds them disturbing or disquieting, mostly due to the loss of control. I suspect there is some genetic predisposition that makes some individuals especially susceptible to the euphoric properties. The elusive target I’ve been searching for is that something in the brain that leads to susceptibility.

Are opiates more difficult to study than alcohol?

A lot more difficult from a genetic perspective.  The original alcohol genetic studies looked at large populations of twins overseas, where twin registries were kept. Genetically, twins are the same, but there are many cases where one is raised by biological parents and the other is raised by adoptive parents. When the behavioral tendencies of these children as adults were looked at, there clearly was a genetic effect about who their biological parents were. This certainly rules out environment. With opiates, it’s a little more difficult to rule out environment.

How close are we in putting the puzzle together?

We are probably 10 to 15 years away. I think genetic studies are going to go a long way to finding susceptibility or predisposition. It probably has something to do with family structure; the drug intake patterns of parents that are witnessed by offspring; as well as personality differences and stress reduction in individuals.

How many people who start taking opiates for chronic pain develop an abuse problem?

That is unanswerable at this point. To answer it, we would need to look at the whole population throughout the country who have taken an opiate at least once for acute or chronic pain, and of these, how many develop a problem. I suspect that the number is probably pretty small, although we don’t have a good fix on it. The number of people who get opiates prescribed to them is unbelievably high, though.

When do you know it’s time to wean yourself off of your prescription?

When you start to run out early and realize you’re taking it more often than you should, or your dose is of a greater strength than it used to be, or if you’re trying to get prescriptions outside your normal medical channels. Or you’re simply beginning to crave the drug.

Heroin is now a huge problem in rural pockets of America? What do you attribute this to?

The availability of heroin in areas where it hasn’t been before. As the cost of pills has increased, heroin dealers, who are shrewd business people, saw the opportunity to move in. They offer a much cheaper, readily available alternative. What you see now is people making economic decisions, and it’s actually cheaper to use heroin than it is to use prescription drugs.

You say we must reduce the demand. How do we do that?

Focusing on the supply is not going to solve the problem. Too many kids are taking heroin to escape from the reality of life, from anxiety, or be more socially acceptable. If your life circumstances are terrible, you need to find another way to deal with the fundamental problem. Taking drugs will only mask things for a few hours; then you’ll be back to where you started.

Like we did with smoking, we need to educate. Heroin is not some innocuous drug. We need to let kids know that once you start down that path, you’re on a path that is very difficult to recover from. You run the risk of HIV, Hepatitis C, and all kinds of bad things. So don’t start!