Mahlon DeLong, M.D., is a neurology professor at Emory University and a Dana Alliance for Brain Initiatives member. As one of the foremost experts on Parkinson’s disease, we thought he’d be a great person to talk to for Parkinson’s Awareness Month.

DeLong estimates there are 1.5 million Americans with Parkinson’s and that it’s somewhere between one-fourth and one-third as common as Alzheimer’s disease. Parkinson’s is the second most common movement disorder, behind tremor itself.

What are some of the warning signs of Parkinson’s disease? 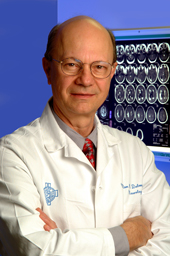 MD: Parkinson’s disease means something to physicians that’s a little bit different from what it means to the public. There are a number of disorders that look like Parkinson’s that share a lot of features. We call those atypical forms of Parkinson’s. Then there is Parkinson’s, which gives a pretty clear, consistent picture. Often that begins with tremor, usually on one side. It occurs not when people are moving, but when they’re relaxed: a rest tremor. They have difficulty with movement. They may notice their handwriting getting more difficult to read. Their faces may become less expressive. As time progresses, the disease can affect both sides.

There can be non-motor symptoms that occur earlier: more than 90 percent of patients lose their sense of smell; there can be bowel and/or bladder difficulties; sometimes people experience depression or trouble sleeping. When we talk of Parkinson’s disease we talk about the core features—the tremor, the slowness of movement, and muscular rigidity, which we find on exam and is not something people complain about.

Are there ways to increase mobility? I’ve read some articles about dance classes for people with Parkinson’s.

A lot of attention is being focused on the importance of exercise and dance. People, generally speaking, don’t like to exercise, but they like to dance. There’s a double reward there. You’re exercising and you’re having a social engagement. The more exercise the better.

People who do what’s called forced exercise—30 or 40 minutes on, say, a stationary bike, where they work up a sweat and get their heart rate up—seem to have benefits that are quite significant in terms of improved motility and balance and better control of their symptoms. There’s some sense that it may also be protective and disease-modifying. It’s not as clear as the clinical benefit, but exercise seems to have profound effects on the brain, such as the release of growth factors and other substances that can be protective.

We know under 10 percent of patients have an identifiable genetic cause. But the feeling is that genetics probably play a big role; but it’s not just the genetics, it’s how the genetics and the environment interact. For example, an exposure to pesticides may cause Parkinson’s in people who have lowered resistance or particular genetic predisposition. We call these forms that occur without an obvious genetic cause “sporadic” forms of Parkinson’s.

Are there ways to decrease risk?

There are things that are associated with a lower risk of developing Parkinson’s, such as coffee drinking and smoking, believe it or not. Not that anybody would advocate that, but it shows up over and over again. The more coffee you drink, the lower your risk of Parkinson’s.

I think patients are most interested in and need to be engaged in what they can do. Diets that are rich in fruits and vegetables are important, along with exercise, to slow progression. Those things are probably underutilized. Even if these factors didn’t have a great effect for Parkinson’s, they could be life-saving for something else.

What are some new treatments on the horizon? I know you do a lot of work with deep brain stimulation (DBS)?

Our work is largely on DBS. DBS has revolutionized the care and treatment of patients with advanced Parkinson’s disease. The attempt has been to replace dopamine by implanting different cell types that either produce or stimulate release of dopamine. So far the research has been very promising in animal studies but when they’ve applied it to patients, the treatments prove not to be effective. There’s still controversy over whether those studies were adequate to really test the hypotheses.

There are always new approaches. Genetic engineers are now trying to put in genes to modify release and expression of trophic factors and stimulate and rejuvenate dopamine-producing cells. There have been many new drugs introduced for Parkinson’s, but it is a fact that the discovery of Levadopa in the 1960’s was probably the most revolutionary finding. Even today it is still a mainstay of treatment.

What are you working on right now?

We’ve done some recent studies on the effects of different DBS targets for Parkinson’s disease. We kind of know how to treat Parkinson’s patients with DBS, but tailoring the treatment to the patient is a challenge—not all patients have the same type of Parkinson’s; many factors are still being explored. Even the stimulation is being examined in a way that allows the stimulator to sense when the stimulation is needed. Delivery of this is still undergoing study to optimize it. I think there’s a lot of room for progress there. There are many different avenues.

There are literally hundreds of approaches being tried to restore function. One of the main problems is that dopamine is not the only problem in Parkinson’s disease. This is a wider spread disorder that involves other cells and neural systems. Even if you solve the dopamine problem, you have not touched these other parts of Parkinson’s that we know often bother patients.