By any measure, Wise Young—co-author this month’s  Cerebrum article, “You Say You Want a Revolution”— has had an extraordinary career. In August 2001,  TIME named him ‘America’s Best’ in the field of spinal cord injury research. In 2005,  Esquire ranked him among ‘The Best and the Brightest’ and dedicated five pages to his story, from mid-century Hong Kong and Japan to his career as a neurosurgeon at New York University to his founding the W.M. Keck Center for Collaborative Neuroscience at Rutgers University. He recently spoke to us from Hong Kong, where his Phase 2 clinical trial for spinal cord injury recovery (establishing efficacy of the treatment) has demonstrated some of the most promising developments to date. 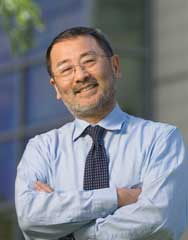 You took the opportunity in co-writing the article to focus on ethical dilemmas in scientific research. What about your own research?

Wise Young: I have organized a twenty-five center clinical trial network in China, Hong Kong, and Taiwan to test a new therapy for chronic spinal cord injuries, using transplantation of umbilical cord blood stem cells, lithium, and intense physical rehabilitation. Testing 42 patients, we found that 75 percent of them are walking after one year. In addition, 60 percent have regained some bladder and bowel function.

This will mean that a flood of people will go overseas to get umbilical cord blood cell transplants in the Caribbean and India. We really want to address the situation of expanded access in the United States and Europe, where it generally takes five or six years longer to get the approvals necessary for testing therapies on human subjects.

In the article, you don’t specifically address expanded access to research therapies, but the idea of novel approaches to scientific research is the kind of issue you and Dr. [Patricia] Morton, Ph.D., do write about.

I didn’t want to appear self-serving and talk solely about my research, but I will say that the worst thing you can say to someone is that you’ve found something that makes you walk and restores bladder and bowel function, but then add that the therapy will not be available to you for five or six years. This is just cruel and unfair. Most of us would agree that if the scientific effort to help people is relatively minor or of low risk, then access to experimental therapies should be granted. While we are applying for the Phase 3 trials [to establish final confirmation of safety and efficacy], we are also applying for expanded use access at almost the same time.

I recently spoke to Congressman Chaka Fattah (D-PA) and some companies about this issue because there is an enormous push for it from communities of people with spinal cord injury, cancer, ALS, schizophrenia—you name it. The movement has gained more support in Europe than in the US, but my hope is that its time will soon come.

You write that for many reasons, scientific advancement has been held back because of unnecessary and wasteful competition. But some would argue that competitive spirit and such things as recognition, remuneration, or just beating the other scientist to the punch, might actually fuel discovery.

This would be true if we had unlimited resources, but we don’t have that luxury in science. There is limited funding, limited good people in the field, and a short time to achieve what we need to achieve for human kind. I’m not one of these people who believe that motivation comes from competition.  I do not believe that capitalism works in science.

In the article, you point out “cost” as a reason for why large numbers of people aren’t able to participate in, for example, a months-long walking program. Where is the line between cost and cure?

That, of course, depends on the condition. One thing we know is that cures are too expensive these days and in order to make sure that cures get applied to the maximum number of people, we need to deal with the issue of cost. A lot of what I do is overseas, in third-world countries, where cost is truly a very, very important issue. Therapies simply won’t be available if they cost too much.

Cost vs. cure is something that I deal with on an everyday basis. We need to solve this problem; it is killing the pharmaceutical industry right now. The average cost of discovery to market is close to $2 billion per therapy.

How important is politics to scientific discovery, especially as it relates to spinal cord research?

The story of stem cells is maybe the best illustration of the role of religion and politics in science. It sadly held back stem cell research for more than ten years. And many of the fears concerning stem cells never materialized: the concept, for example, that we would have baby factories to generate extra organs. All of that came out of ignorance and was picked up and used in politics to suppress science. I’m very happy that scientists have mobilized to fight this, although we are still seeing it in global warming.

You write that “it behooves the scientific community to develop guidelines to balance the urgency of impending death with the dreams of those who would be healed.” What type of guidelines would you like to see?

Many are common sense and already exist, but scientists need to play more of a role to make sure that research claims are evidence-based. One of the most difficult parts of what we do as scientists is getting into the business of selling ourselves and selling our science to the public. We need to be very careful about the distinction between hope and hype. When I was starting in this field in the 1980s, we were the very first to hold a press conference on the result of a clinical trial, and neurosurgeons were really miffed at the thought that they had to read about a scientific discovery in the Wall Street Journal as opposed to a scientific journal. In 25 years, the field has completely reversed its attitudes. You find that a huge number of studies are “press released” immediately upon publication by public relations people who are paid to hype a story because it means money or donations to a university.

Medicine has become too much like business. I have proposed a new course that I want to teach next year at the Rutgers Medical School called “Compassionate Medicine.” When I was in medical school at Stanford, most doctors did medicine not to earn money, but to avoid business. We advocated for patients; not only to cure them but fighting for their care. Now we are the gatekeepers of the care. I want to advocate for a different kind of medicine; medicine for compassion. Students need to be taught that they have options; they don’t necessarily have to head into the direction of making money, and that there are many, many opportunities for non-profit medicine. The message is: You will still get paid, but your life will be more devoted to taking care of people. Same is true for researchers. In the last decade or so, this is an issue I’ve become more and more concerned about.