Back to Parent Page
HomeArticlesNibbling on Neurons: A Closer Look at Synaptic Pruning 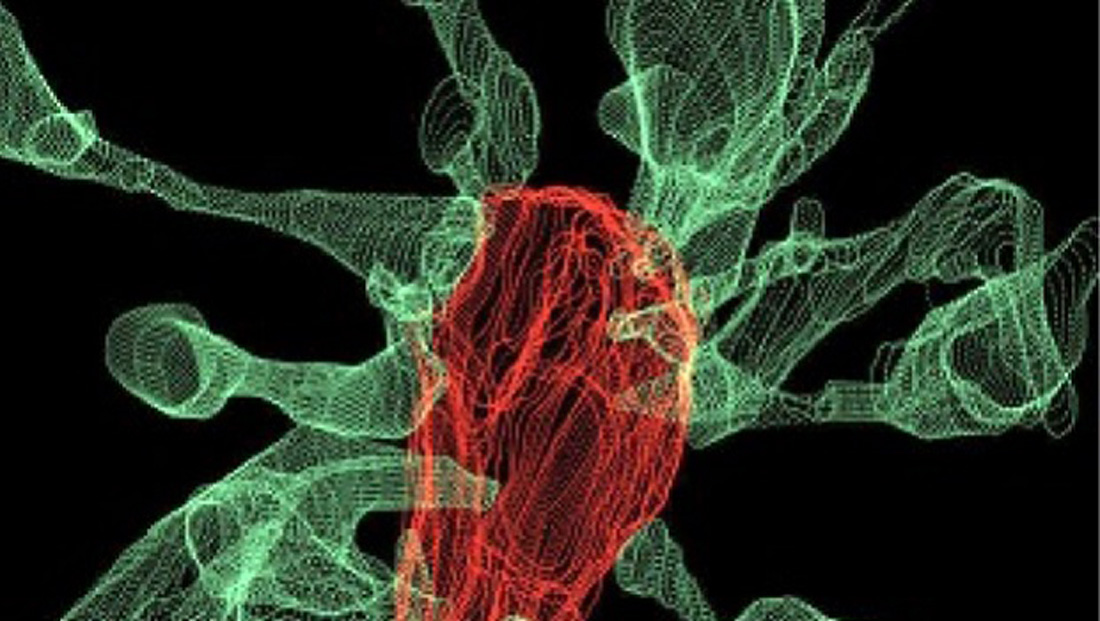 For decades, neurobiologists have hypothesized that synaptic pruning, the process of synapse elimination by specialized cells called microglia, is a critical to healthy brain development and function. But because microglia are small and speedy, it has been difficult for researchers to fully understand where, why, when, and how microglia alter the specific synapses and how that influences neural processing and plasticity. Researchers from the European Molecular Biology Laboratory (EMBL) in Italy have created a new imaging technique that catches microglia in the act of “nibbling” parts of synapses, offering new insights into how microglia help shape the brain’s circuits.

The magic of microglia

Human beings are born with a wealth of synapses, functional contact points between brain cells. Post-mortem studies have shown the brains of newborns show a veritable boom of synaptic connections as they enter childhood. The number of those connections will dramatically decline during adolescence, and researchers think this pruning process is critical to healthy brain development. When the process goes awry, it can lead to incapacitating neurodevelopmental disorders like schizophrenia, as well as neurodegeneration later in life (see “Tracking Neuroinflammation in Development, Neurodegenerative Disease”).

Marie-Ève Tremblay, a neuroscientist at Canada’s University of Laval, says there is now considerable evidence that microglia, small, specialized immune cells, play a key role in these pruning processes. “Microglia are immune cells that play an important role in helping to maintain brain health. We now understand that they are super active in the healthy brain, helping to refine important circuits,” she says. “In the past decade, we have seen they play a crucial role in development—but also in the mature brain, as well. They have now been linked to plasticity, for learning, and for memory. So it’s very important we understand their physiological role as much as we can, in synaptic pruning and in other roles.”

While theories abound regarding synaptic pruning and how microglia may influence brain development by removing certain connections and strengthening others, some researchers feel there is a lack of strong evidence to support the claims.

“This is an idea that has been around in the literature for quite some time. But the actual evidence isn’t that strong,” says Edward Bullmore, a developmental neuroscientist at the University of Cambridge. “Partly, that’s because we don’t have a good imaging marker of synaptic pruning. The story of synaptic pruning really rests on post-mortem data. We have tools that can show us evidence that synaptic density is abnormal but that’s not quite the same as being able to say you have evidence that the developmental process of synaptic pruning is the explanation for that. We’ve lacked the tools to properly investigate.”

Cornelius Gross and his team at EMBL hoped to find a way to provide such tools to image what he calls “eating events.”

“The prevailing theory is that microglia were literally eating whole synapses,” he says. “Synapses are so small, and microglia are so dynamic, that most in vivo imaging techniques have not had the time or spatial resolution to see these things.”

Gross and colleagues spent the greater part of five years to come up with an imaging technique that takes a good look at what microglia were doing in hippocampal cells—going through quite a bit of trial and error in the process. They used a combination of light sheet fluorescence microscopy with correlative light and electron microscopy (CLEM) and were able to see that microglia weren’t eating whole connections but “nibbling” off bits and pieces at the point of contact. They were able to visualize microglia send out a thin projection called a filopodia to make contact with a synapse, before doing said “nibbling.” The results were published in the March 26 issue of Nature Communications.

“This is a selective process. And we saw that the synapse wasn’t fully eliminated—it stayed behind even after it was nibbled. So the microglia eat, but don’t eliminate,” Gross says. “This means that we have to rethink the theory of what microglia are doing when it comes to remodeling these circuits. We believe, instead of removing synapses, they are actually helping to form them. By removing those bits and pieces, they aren’t weakening synapses, they are making space to allow new connections to form.”

Tremblay says that Gross’ findings are very interesting and that new techniques like his offer researchers new ways to study microglia function.

“We now know that microglia are very heterogenous. There are different subtypes that multi-task and do different things for the brain. We also know they vary a lot across the lifespan and across different regions of the brain,” she says. “Having ways to see the different contexts in which they act is important. Because the strength of connections determines the activity of circuits. This study showed that the microglia were just modifying the synapse a little bit. But that little bit can have huge implications for the whole activity of the circuit.”

Gross hopes to continue refining the technique so he can better investigate the role of microglia in brain development—and how these “nibbles” may relate to the development of neurodevelopmental disorders.

“Synaptic pruning, in many ways, is still a big mystery. Microglia are moving all the time. We need to do more studies where we have the time and spatial resolution to see what they are actually doing,” he says. “Now, what we need to find out is what is it about the synapses that get nibbled and those that don’t. What is the ‘eat me’ or ‘don’t eat me’ signal? Once we can better understand these signals, and the logic behind the pruning, we have the possibility of understanding how these cells help guide the brain as it develops.”