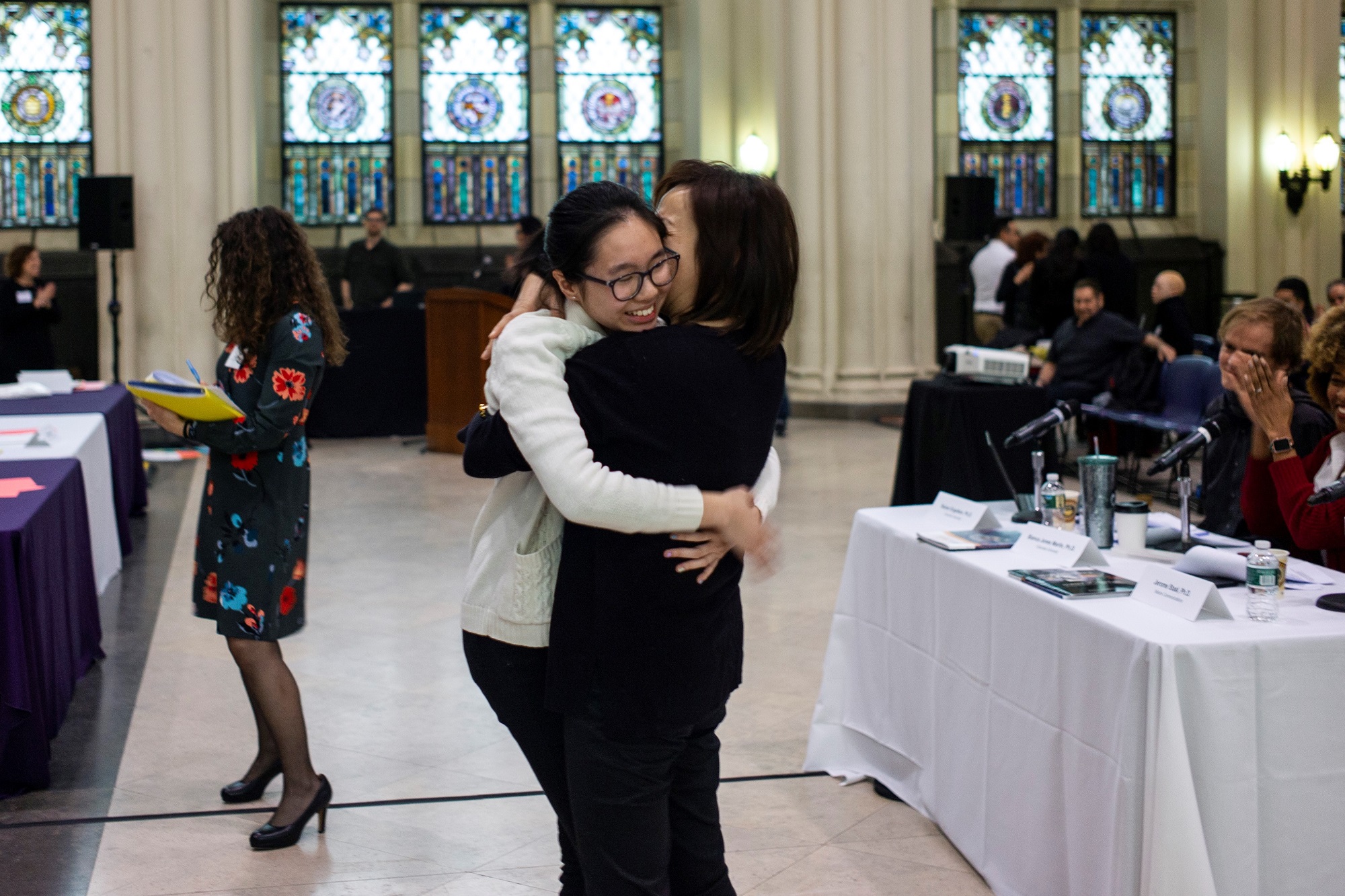 Students from 23 schools across the five boroughs and Westchester County came together to test their smarts in the New York City Regional Brain Bee this past Saturday. Held in the Great Hall at The City College of New York, the 2019 competition concluded after eight rounds of five brain-related questions each, with the top three winners walking away with cash prizes, plaques, and the knowledge that they probably knew more about the brain than most of the audience.

“The New York City Regional Brain Bee competition is in celebration of Brain Awareness Week,” said Kathleen Roina, director of outreach and education at the Dana Foundation, in her welcoming remarks. “The global campaign was created by the Dana Alliance to advance public understanding about the brain and the promise of brain research.” The Brain Bee is just one of many Brain Awareness Week activities designed to help students become more interested and active in learning about the brain and the research surrounding it.

Nim Tottenham, Ph.D., a professor of psychology at Columbia University, director of the Developmental Affective Neuroscience Laboratory, and a Dana Alliance for Brain Initiatives (DABI) member, highlighted the importance of brain research in her keynote speech by discussing the studies she and her team are currently conducting regarding the link between early childhood experiences and emotional functioning in adulthood. “This link between early experiences and our later functioning endures for a really long time in humans,” Tottenham said, which is why it is so important to understand what causes it and keeps it there.

Every year, regional Brain Bees are held across the globe as part of the International Brain Bee. This year’s NYC Regional Bee was sponsored by DABI, Columbia University Neuroscience Outreach (CUNO), and the Columbia Neuroscience Society (CNS). The competition gave students in grades 9-12 the opportunity to not only compete against their classmates, but also to learn about the latest innovations in brain research and get some up-close experience with the organ they were answering questions about.

Before the Brain Bee began, students and guests of the competition were able to attend the Brain Fair, also taking place in the Great Hall. The Fair let attendees take part in different activities, but the most exciting feature was the real brains on display. Along with animal brains in jars, the booth had real human brains that participants were able to examine with gloved hands–due to the brains having been soaked in formaldehyde and other chemicals.

Of course, the true brains being showcased on Saturday were those of the competitors. Kelly Chan, a 16-year-old junior from Staten Island Technical High School, won the first-place prize of $500 and an all-expenses paid trip for two to USA National Brain Bee Championship at Penn State University Medical School.

“It was just so unexpected,” said Chan. “I wasn’t expecting to win first-place.” Surprised but excited, she said that she was looking forward to attending the National Brain Bee, but since she was not anticipating participating as the first-place Regional Bee winner, she has a lot of preparing to do. “What I did was just read the textbook, and I would make questions for myself and test myself that way,” she explained about her preparation methods. “I guess it worked!”

The second-place prize of $300 went to 16-year-old Amalia Korniyenko of Leon M. Goldstein High School for the Sciences in Brooklyn. The high school junior was the third-place winner of the 2018 NYC Regional Brain Bee. This year, Nafew Mustafa, a 17-year-old senior from The Bronx High School of Sciences, took third-place and its prize of $200.

“I just think even if you don’t place third, second, first, this whole competition is just a really good experience for anyone and everyone that’s interested in neuroscience,” Chan said of the Brain Bee. “I made a bunch of friends here, and it was just a bonus on top of learning.”

To learn more about the Brain Bee, visit the International Brain Bee website.