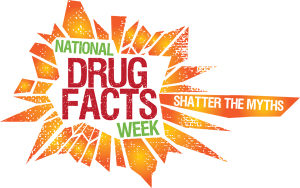 Today marks the beginning of 2019’s National Drug and Alcohol Facts Week, a health observance first launched by the National Institute on Drug Abuse (NIDA) in 2010. In 2016, the National Institute of Alcohol Abuse and Alcoholism became a partner, adding alcohol as a topic area for the week. Geared towards teens, the initiative helps educate people on what science has taught us about drug addiction and alcohol. It also attempts to debunk myths that teens–and adults–may believe about certain substances due to various influences such as social media, peers, music, movies, and TV shows.

A new report by the National Safety Council shows that for the first time on record, Americans are more likely to die by an accidental opioid overdose than in a car crash. Data from 2017 gives Americans a 1 in 96 chance of dying from opioids, versus a 1 in 103 chance of dying from a motor vehicle accident. The past few decades have seen a steady increase in opioid addiction and overdoses, due in no small part to the reassurance of certain pharmaceutical companies in the 1990s to medical professionals and patients that opioid-based painkillers were not addictive. Based on data from 2017, the Centers for Disease Control and Prevention state that on average, 130 Americans die every day from an opioid overdose.

However, while the data for adult drug use may not seem particularly reassuring, the data for teens is more hopeful. Each year, NIDA conducts a survey titled “Monitoring the Future,” (MTF) with the results released at the end of the year. The annual survey has tracked drug, alcohol and tobacco use of 8th, 10th, and 12th grade students since 1975. The 2018 results show that binge drinking in particular has been on a steady decline for the past five-years, and that misuse of opioids other than heroin among 12th graders decreased from 4.2 percent in 2017 to 3.4 percent in 2018.

Although most drug and alcohol use has been declining among teens, there is increased concern about vaping. Almost 40 percent of 12th graders reported vaping in 2018, up from 27.8 percent in 2017. Vaping is seen as safer than cigarette smoking by many teens and adults, but according to the MTF survey, many teens do not realize that what they are inhaling is actually nicotine, and instead think it is either just flavoring or marijuana or hash oil. Seeing as nicotine is a highly addictive chemical, it is important to continue to educate teens on what they are putting in their bodies.

National Drug and Alcohol Fact Week will run from January 22-27. Various school and community events are taking place across the country, and a national Chat Day is planned for Thursday the 24th, where you can go online and ask NIDA scientists any questions you have about drugs and drug abuse. Tips on how to get involved in the week, such as promoting events or activity ideas, can be found on the campaign website.