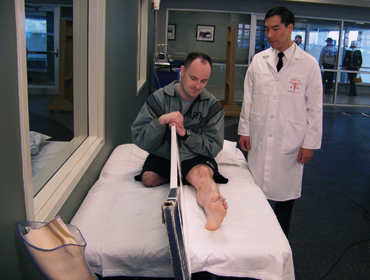 
You have recently begun a study using functional Magnetic Resonance Imaging (fMRI) to better understand how mirror therapy works to relieve painful sensations in the phantom limbs of amputees. Why the focus on mirror therapy?

Jack W. Tsao: My colleagues and I have been working with amputees at Walter Reed Army Medical Center for the past five years to investigate Phantom Limb Pain (PLP), which is the sensation that an amputated limb is still present, with painful sensations appearing to emanate from it. An amputee may feel, for example, that the limb is frozen in an uncomfortable position, or he or she may experience burning, stabbing, shooting, or electrical shock-like pain.

Mirror therapy (MT) [1] was first reported in the mid 1990s by a neurologist named V.S. Ramachandran at the University of California-San Diego, who studied a small series of upper-extremity amputees who were years or decades post-amputation. In this study, MT successfully relieved PLP in about 60 percent of the group (9 of 15 patients). [2] In the decade that followed, nobody ever did a randomized, controlled trial to see if MT actually works or not. So in 2005, our group conducted the first controlled trial of MT, in which we split subjects into three groups: one group received mirror therapy; one group underwent the same process as the mirror therapy group but with a mirror that was covered with a cloth to prevent the reflection of the limb moving, and a third group closed their eyes and visualized their phantom limb moving.  We showed that MT clearly is better than the two control therapies. [3]

The fact that neither the covered mirror nor the mental visualization groups improved in our study indicates to us that vision is the key component of MT–visual input seems to be critical to pain resolution. Still, many questions remain about what is happening in the brain as a result of MT. There are a number of hypotheses about how it may work, including that the mirror helps somehow to rewire the brain, dampen mismatched signals between neurons controlling vision and proprioception (the sense of where a body part is in space), or clear persistent painful memories associated with the amputated limb. No one really understands why it works, which is why we’re so happy that the Dana Foundation chose to fund our study, which is being done in collaboration with Christopher Baker, Ph.D., and his group at the National Institute of Mental Health.

What are you hoping to learn in your current imaging study?

Our theory is that PLP is mediated in large part by the cortex, so we want to see which brain areas are active in someone before they get MT and how that changes after four weeks of therapy. We ask each subject to perform several tasks, such as mentally moving the phantom limb while observing an image of an intact limb moving, and we look at what regions of the brain are active or inactive during the task. We then re-scan our volunteer subjects two weeks and four weeks after beginning therapy to see how those patterns of brain activation have changed.

We have completed mirror therapy and scans on eight subjects and have also scanned control subjects. Now we’re examining the data to see if we can detect changes. We’ll have our first review of the data in the next month or two, so it’s possible we could have preliminary conclusions by mid-2011. It’s also possible we will need to scan more patients, because we’re tracking pain levels in response to therapy and some people have decreased pain but others don’t. We want to determine if people who respond to the treatment have detectable changes in active areas of the brain as compared to non-responders.

How is it that an arm or leg that no longer exists can continue to cause pain?

There are a number of theories as to why phantom limb pain arises. [ 4 ] One idea is that there is a mismatch in the signals that the brain is receiving. While vision largely directs movement of body parts for sighted people, proprioception provides the brain with constant feedback from the limb during movements. After a limb is amputated, the neurons in the brain that control limb movement are still intact and the nerve signals associated with vision and proprioception are still present, but suddenly the vision pathways are telling the brain one thing and the proprioceptive pathways are telling the brain something else. It may be that the brain interprets these mismatched signals as the phantom limb being resurrected and in pain, as if it were stuck in some awkward position.

Amputees have very vivid descriptions of these phenomena. One woman told me that it felt as if her arm were wrenched behind her head with her elbow turned up and twisted. Another person felt that his foot was in a vise grip, as if he were wearing a boot that was too tight. Another man, who had lost his hand while pulling the trigger on his rifle, described his finger as being stuck on the trigger in that firing position and his thumb muscles in painful spasm, as if he had been gripping the gun for too long.

A second theory that scientists have put forward is that there is neuronal reorganization in the brain following amputation. The neurons formerly controlling movement of the amputated limb make new connections with other nearby neurons. One study has shown that the greater the degree of reorganization the more severe the pain. However, it is not clear how these aberrant connections may mediate pain.

We have put forth a third theory. We believe it is possible that the vivid memories associated with specific limb positions are stored in areas of the brain; something triggers their re-emergence in the phantom limb. This would explain amputees describing detailed and vivid sensations.

Are these theories enough to explain PLP?

I think that all of these theories are valid to varying degrees. I don’t know if it’s a combination of these or if there is something in the peripheral nervous system also contributing to the experience. Certainly we know that reorganization does occur; what’s not clear is whether the reorganization actually mediates the pain or just happens to be associated with it but really has nothing to do with [the causes of] PLP.

One of the findings from our clinical trial is consistent with the mismatched-signal theory. Several of the subjects in the mental visualization segment of our study, who were asked to close their eyes and move their intact limb while envisioning the phantom limb moving, actually had worse pain. The pain improved after we switched them to MT. Since the subjects’ eyes were closed but their limb was moving, they were only receiving proprioceptive feedback, and it may be that this therapy worsened the dissociation of proprioception from visual signals.

Is MT used much today to treat PLP?

What are your next steps with the research?

We are also about to start a genetics study. We know that about ten percent of people who have had a limb amputated never develop PLP, so we’re very interested in finding out if there are one or more genes which may confer protection against PLP in these people. That’s why we suspect the current theories cannot explain PLP entirely. There is probably something else that’s been missed.

[1] In mirror therapy, the patient views the reflection of their intact limb moving in a mirror placed between the intact and missing limbs while simultaneously imagining moving the phantom limb in a manner similar to what they see reflected in the mirror. The “virtual” limb in the mirror therefore appears to be the missing limb.

[2] Ramachandran VS and Rogers-Ramachandran D. Synaesthesia in phantom limbs induced with mirrors. Proceedings of Biological Sciences 1996;263:377-386.