Back to Parent Page
HomeArticlesMindfulness for the Developing Brain 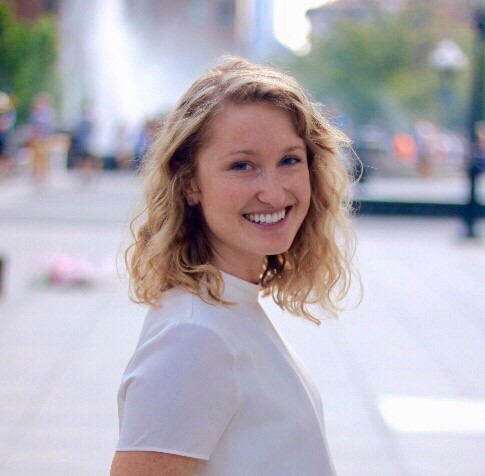 On Thursday, March 15th, Know Science, an organization that advocates the knowledge of new science and scientific research to the public, hosted the talk “Regulating the Brain: The Science of Mindfulness” at the Zuckerman Mind Brain Behavior Institute in New York City. This was an event presented as part of Brain Awareness Week.

Meriah DeJoseph, the presenter for the evening, is a lab manager for the Neuroscience and Education Lab at New York University (NYU). She will be starting a Ph.D. program in developmental psychology this fall to further investigate self-regulation and how mindfulness can affect the developing brain. Prior to NYU, she worked on a project at Teachers College, Columbia University studying brain activity of children from Girls Prep Bronx Elementary, who have a mindfulness class integrated in their curriculum.

DeJoseph explained how the brain can be broadly understood from an evolutionary perspective broken up into three parts: The “lizard brain,” where our primal instincts and survival skills come from; the “limbic or mammalian brain,” where our emotions take place; and the “neocortex or human brain,” where our logical and abstract thoughts come from, which separate us from animals. When the brain is stressed or “dysregulated,” said DeJoseph, our human brain gets taken over by our limbic brain, causing us to become reactive and emotional. 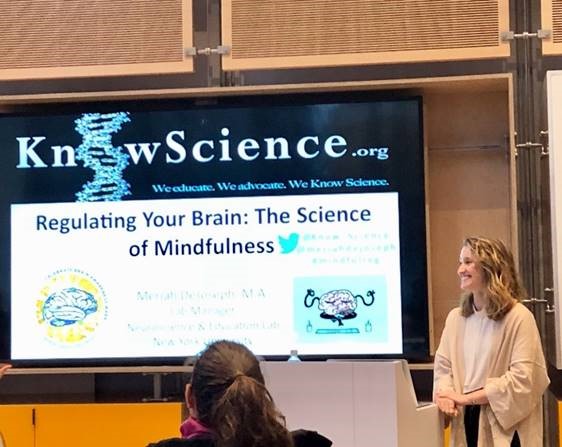 On the flip side, when we feel “regulated,” our human brain has control and we can reduce our limbic brain reactions and keep our thoughts in order, she said. However, with all the stressors of today’s world, maintaining this level of “top-down” regulatory control can be difficult, which is why mindfulness has become a topic of public and scientific interest. DeJoseph, along with many others in the neuroscience world, are interested in how mindfulness can be a tool to help keep stress at bay.

In her work with children, DeJoseph uses simple techniques to teach them about their brains. To help children visualize the thoughts swirling around in their heads, she gives them a “mind jar,” which is a bottle filled with water and glitter. They shake the bottle, and then sit and watch the glitter slowly settle—a metaphor for what mindfulness can do to help calm your thoughts.

In the mindfulness program at Girls Prep Bronx Elementary, headed by a teacher fittingly named Kelli Love, or “Ms. Love” by her students, students practiced yoga and mindful breathing exercises once a day for 40 minutes over 10 to 12 weeks. To study the effects of these exercises, Dr. Trey Avery, Dr. Karen Froud, and DeJoseph studied brain activity (EEG) among a small pool of students, aged five to six years old, in comparison with brain activity of demographically matched students from other nearby schools. While wearing an EEG cap, they gave the children an attention task to complete and found that the brain activity of the children at Girls Prep Bronx Elementary showed greater engagement of the frontal cortical brain regions, which is generally developed a little later in life and is responsible for more mature cognitive ability to focus in on a task. The children in the comparison group showed normal signs of maturity for this age range.

While the findings were encouraging, DeJoseph acknowledged that the study was very preliminary and there were many factors that were not accounted for. She is hopeful that this study will contribute to the growing research on the ways mindfulness can affect the growing brain.

To learn more about the mindfulness program at Girls Prep Bronx Elementary, watch the video below:

You can also read our 2016 briefing paper on the mindful brain and how mindful practices are being studied in schools.