Back to Parent Page
HomeCerebrumMental Health for Refugees 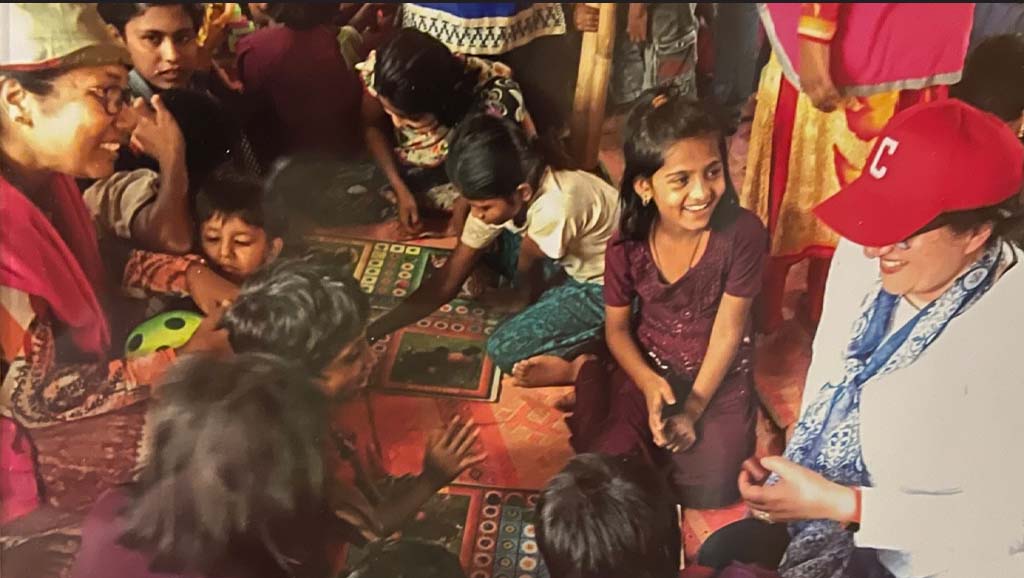 Anne Glowinski observes a group of kids at a child safe place within a refugee camp as they learn rudimentary new Bangla vocabulary through song.

Last month, against the backdrop of tens of thousands of refugees fleeing Ukraine, the US formally accused Myanmar of committing genocide against its minority Rohingya population. This genocide was evident during two trips I and younger colleagues made in 2018 to Bangladesh to provide mental health training and support to relief workers on the frontlines of the refugee camps. Depression, anxiety, distrust, post-traumatic stress disorder, and substance abuse were among the problems.

Invited by a Non-Governmental Organization (NGO), our first visit took place about a few months after hundreds of thousands of Rohingya refugees—many of them children—had perilously crossed the Myanmar border into south-eastern Bangladesh. In my role as a professor of child and adolescent psychiatry, I engaged in myriad activities, which included visiting NGO headquarters and refugee camps. We observed living conditions, spoke to Rohingya people of all ages, and listened to the stories of villagers—several of which had been at the epicenter of massacres by Myanmar’s military-led government. One particularly vivid memory is having long conversations with three wonderful brothers ages 8, 14, and 21, who were the sole survivors among a sibship that included initially 15 brothers.

I kept a journal throughout the visit, and here is some of what I wrote to express what my experience was like on my very first day in Bangladesh:

After two days and three flights through Dubai and Dhaka, Dr. Ali Anwar (one of my chief child and adolescent psychiatry fellows at Washington University) and I arrive at the Friends in Village Development Bangladesh (FIVDB) headquarters in Sylhet, a northeastern Bangladesh city. We started our 1 to 5 p.m. workshop almost an hour late. We were jetlagged and nervous but exhilarated.

Tomorrow, we will conduct a more intimate in-training session for their refugee camps’ staff in Cox’s Bazaar, where we will be heading later today. The rest of our time we will visit remote Rohingya refugee camps near the Myanmar border. FIVDB has helped to organize help for many refugees through the educational programs that they are famous for, such as community theater (e.g., to inform the Rohingya about the risks of child marriage).

At yesterday’s workshop, during obligatory computer issues, Ali and I learn from our audience—mainly the leaders and main coordinators from FIVDB—that the NGO’s vision is “A vibrant society based on justice, equity, democracy, and environmentally sound principles.”

Like almost everywhere around the world, education does not necessarily translate to mental health literacy. That is why we have been invited.: Mental health problems are plaguing the refugees. So, Ali and I start, daunted and yet reassured by the outstanding reputation of FIVDB. They understand adult learning; it is not just about content. It is about inspiring by tapping into pre-existing relevance for the adults, who, unlike children, do not always integrate novelty with abundant enthusiasm.

Our presentation stresses concepts such as depression or the impact of trauma on the mind and body, and we find it especially impactful to have the audience participate and role play. We quickly attain a high level of trust, candor, and (according to participants’ feedback) a true consolidation or awakening that mental health, an area of taboo in Bangladesh and many other parts of the world, must be heeded and integrated into healthcare.

Ali and I cannot offer many specialized resources, so we demonstrate basic skills, especially those recommended by the World Health Organization and others for psychological first aid by lay people. We focus particularly on active listening, a skill that can also facilitate self-care and community support for a work force at enormous risk for burnout.

This is especially true for the refugee camp workers we will meet tomorrow. We are also listening actively and learn that access to remote camps built on slopes requires daily back and forth walking for several kilometers in heat and humidity. Also, the monsoon season is near, with its flooding and cyclones; half of the refugees, or almost 400,000 people, will need to be relocated. However, no firm plans have been proposed yet, creating a toxic level of anxiety among the relief workers.

We hear about the challenges of working with refugees who have partially unfamiliar customs in this new country and have been acutely traumatized recently, but also chronically for decades before that. We hear about leadership challenges and that the refugee crisis is leading to an unprecedented level of scrutiny by NGOs from all over the world. So, FIVDB is getting a lot of well-meaning expert advice—some contradictory.

Afterwards, we are exhausted yet rich with new connections and grateful for what our learners have taught us, too. We fall asleep underestimating mosquitoes and a few other things that we will encounter in the week ahead.

Traveling forward to 2022, present day: Despite heroic efforts by NGOs and their workers and their many innovative programs, the situation in Rohingya refugee camps continues to be harrowing. This is not a complete surprise: Refugees are the fastest growing population in the world, and the average time spent in a camp by a refugee is 10 to 20 years. Justice, even symbolical, is slow: evidence is the five years it has taken for the US to recognize the Rohingya as victims of genocide.

Much is being said about the sentimental discrepancy between our average emotional reactions to the plight of Ukrainians (many now refugees), and our less intense average reactions to the plight of other refugees, such as the Rohingya and many others. It is clear that all refugees fleeing armed conflict and danger share the same, almost unbearable human anguish, thirst for justice, and for the fraternity of others more fortunate.

In a conversation I had with Rohingya elders in 2018 when we gathered to discuss their cultural identity before making any substantial mental health recommendations, one of the men told me: “If you have a cow that is brown, you call it brown cow. If you have one with spots, you call it a spotted cow. We are like a cow without a name. To the world we don’t have a name.”

This column first appeared in the Spring 2022 issue of our Cerebrum magazine. Click the cover for the full e-magazine.