Back to Parent Page
HomeArticlesMemory as a Creative Act 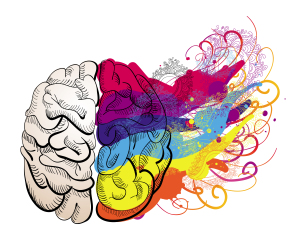 Daphna Shohamy, Ph.D., is more comfortable in her lab at Columbia University than on stage in front of an audience. So why did she agree to participate in the 2018 Brainwave series for a live discussion? Because art and science are more alike than they seem, she said, and she wanted to help explain that.

The series pairs accomplished professionals with neuroscientists for a themed discussion at the Rubin Museum of Art in New York City. When asked who she would like as a partner for the discussion on the relationship between narrative/storytelling and memory, Shohamy knew right away she wanted to be paired writer Nicole Krauss, author of New York Times bestselling books Great House and The History of Love, because writers truly “understand the force of memory.”

Krauss’s books often deal with neuroscience related topics such as amnesia, but last Saturday’s discussion, titled “Trauma and the Future Self,” focused more on ideas and subject matter and its relationship to recalling the past than the contents of her books. She agrees with Oliver Sacks, the famous neurologist and writer, who said we use memory to create a sense of order and coherence, and believes that writing serves the same purpose.

Shohamy, a member of the Dana Alliance for Brain Initiatives, agreed, saying our brains are always trying to create coherence in the world around us. She discussed the role of the hippocampus in creating a spatial map in the brain. Place cells, discovered in 1971 by Dana Alliance member John O’Keefe and John Dostrovsky, are located in the hippocampus and fire when an animal is in a specific place. The hippocampus is known as the part of the brain responsible for memory, so its involvement in spatial mapping is an interesting finding. It showed that the hippocampus is responsible not only for creating memories, but also for making connections and binding things together, such as location and events.

Sometimes this ordering can block us from seeing the truth, Krauss said. She often wishes she could recall past events in a more organic way when writing. She feels that the way we create order and coherence also creates rigidity of narrative. For instance, parents tell children their first memories, shaping their children’s stories before they get a chance to. It is difficult for people to break free from narratives that do not fit us, she said, giving the example of the Israel-Palestine conflict. Both sides block truths that don’t fit with the story they want to tell, she said.

While forgetting may keep us from seeing what does not fit in with our constructed narratives, it also has a positive side. It is an important part of writing, Kraus said, because over time the things she read, heard, and experienced became unconscious as she forgot them. They would then come out again in writing as new ideas. Forgetting is extremely crucial for the brain, too, Shohamy noted, adding that it is not a coincidence that we forget because the brain prioritizes what’s most important to us. A big question for neuroscientists today is how the brain decides to place in order all the information it receives.

I came away from the discussion realizing that the way we recall memories is imperfect, but crucial to creating a self or a narrative. A mere snippet from Krauss best summed up the conversation: “Memory is a creative act.”

This is the 11th year of the Rubin Museum of Art’s Brainwave series and there are still tickets available for many of the events for this season. Stay tuned for more coverage. The Rubin Museum is a Brain Awareness Week partner.