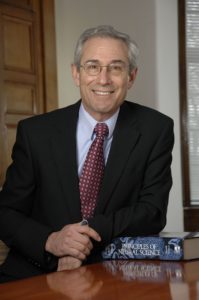 Since 2002, Thomas R. Insel, M.D., has been the Director of the National Institute of Mental Health (NIMH), the component of the National Institutes of Health charged with generating the knowledge needed to understand, treat, and prevent mental disorders. Before that, he was a psychiatry professor at Emory, where he was also the founding director of the Center for Behavioral Neuroscience.

You have been very supportive of the need to create the next generation of tools for neuroscience. Although only the first step, what potential do you see coming out of the first round of awards announced recently for the BRAIN Initiative?

The first round of 58 grants was a mix  of going after fundamentals (designing a cell census), creating new teams (planning next generation brain imaging), and developing new tools (large scale recording of circuits). This is indeed a first step, but I think it reflects the kind of broad approach recommended by the advisory group in their BRAIN 2025 report. I am especially impressed by the creativity and convergence evident in many of these proposals, often resulting from collaborations between neuroscientists and experts from other fields, such as engineering, materials science, or computational science.

Many, non-scientists in particular, compare this to the Human Genome Project. How best can those of us in outreach who are trying to explain the Initiative explain the differences in scope?

The Human Genome Project had a very concrete goal with a clear endpoint: identify the sequence of the three billion nucleotides in the human genome. This was a formidable undertaking but entirely tractable once we had tools for sequencing.

After all, there are only four nucleotides and the sequence is linear. BRAIN is a much more audacious project.

When I talk about the project to the non-neuroscience public, I make three points: (1) brain disorders are the largest source of medical disability in this country; (2) we do not know what we need to know about the brain to reduce this disability; (3) the first step to filling this knowledge gap is to have tools that allow us to understand the link between brain circuit activity and behavior.

In a TED talk you gave last year you stressed the importance of rethinking or reframing how we think about mental illness disorders, saying we need to think of them as brain disorders rather than mental disorders. How would that change the focus of research? What do you see as the most critical foci in the next decade in combating these brain disorders?

There are two critical steps for rethinking mental disorders. First, diagnosis needs to include biology as well as behavior. Basically this means redefining mental disorders as brain disorders. Our Research Domain Criteria (RDoC) project can transform diagnosis by including a broad range of information, from sequence to social behavior. RDoC goes beyond the current diagnostic approach that is limited to symptoms. A second step is to transform therapeutics. Currently, treatment is polarized between medical approaches and psychosocial interventions. We need both. But if we accept mental disorders
as brain circuit disorders, then the real promise is redefining treatments as tuning brain circuits. Medications, devices, and psychosocial treatments may all be needed to tune brain circuits. NIMH is pushing for networked solutions rather than magic bullets for mental disorders.

What are some recent advancements or breakthroughs in mental health treatment?

There is a lot of excitement around rapidly acting antidepressants, with treatment effects observed in hours instead of weeks. And we are seeing progress in biomarkers that help us to identify subgroups within our heterogeneous diagnostic groups. But, perhaps ironically, we have seen more innovation in psychosocial treatments and devices than in medications and biomarkers. New approaches to anorexia nervosa, the use of cognitive training, and emerging evidence about the efficacy of using mobile technology to disseminate psychotherapy are all recent advances.

Perhaps the most important recent breakthrough from NIMH has been the Recovery After Initial Schizophrenia Episode (RAISE) project, which looks at the feasibility and efficacy of bundling together the evidence-based treatments for psychosis to facilitate recovery for every individual experiencing a psychotic episode. Again, by developing a networked solution that could be implemented in the community, we may see a public health breakthrough from RAISE without needing a high-tech scientific innovation.

Clearly you believe in public outreach. Do you think enough neuroscientists are engaging with the public? What are the beneﬁts of educating the public about neuroscience and mental health?

You regularly post to your NIMH Director’s Blog and the organization has accounts on Twitter, Facebook, etc. What is the importance of delivering such important information via social media?

Social media is too much id and too little superego. But none of us can ignore it if we want to inform the public. In fact, if scientists don’t enter into this space, we leave it to non-scientists to be the sole source of information on this huge media platform. How many people are reading the scientific literature? I suspect most papers in the scientific literature are read by a few hundred people, perhaps fewer. My blog reaches perhaps two log units more. A TED talk, such as Nancy Kanwisher’s recent and amazing “A Neural Portrait of the Human Mind,” may go and certainly should go a log unit or more above that.