One of a series in which a Dana Alliance member is asked about daily life in the laboratory and outside interests. 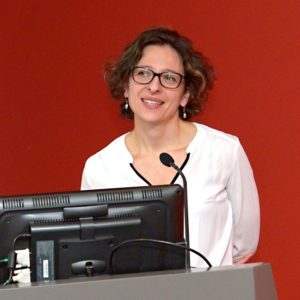 Ewelina Knapska, Ph.D., is the head of the Laboratory of Emotions Neurobiology at the Nencki Institute of Experimental Biology, part of the Polish Academy of Sciences, in Warsaw, Poland. Her current research activities examine socially transferred emotions, the neural mechanisms of impaired social behaviors, and the neural mechanisms of extinction and renewal of learned fears.

When I was in high school, I accidentally read a popular book by a Polish neurobiologist, Boguslaw Zernicki, whose title could be translated into English as ‘From neuron to psyche.’ I remember being very impressed by the unifying framework proposed in that book. That idea stayed with me as I grew interested in biology, and when I had to decide where to apply for doctoral studies I considered only one place—the Nencki Institute, the leading neuroscience research organization in Poland. In a curious twist of events, Professor Zernicki sat on the committee that would interview the doctoral candidates. It seems that my answer to his question at this interview was not satisfactory, but he said that I would learn. I think I did.

Your lab is interested in the mechanisms of socially transferred emotions. Do you think that increase in use of technology limits our ability to understand each other?

I think that modern technology does not spoil our ability to understand other people. The problem is that there is so much information available just a few clicks away that people get easily distracted, myself included, and do not consolidate the cognitive and emotional cues efficiently. I would say that we are still able to understand others, but we grow less and less willing to make the effort

Your lab also studies fear extinction. Do you have a fear that you’ve had to work to overcome? What was your strategy?

As a teenager I was afraid of heights. That was inconvenient, because around that time I started doing trips to the mountains with my friends. Gradually, we did more and more difficult and exposed routes and I found that my fear of heights was gone. Funnily enough, this is precisely what I came to study scientifically. And now that I have kids and have not done any difficult climbs for a few years, I find that I am again slightly uncomfortable on top of a steep cliff or on a balcony on a high floor.

You received the ERC Starting Grant in 2016, which rewards young researchers who show great potential. What is your advice to other young neuroscientists looking to move forward in their careers?

Do not be yourself. Do not blame your failures on your being yourself. You need to envision a better version of yourself rooted in your strengths and capabilities, push hard in the direction that your inner curiosity tells you to go. Then you just keep repeating the exercise until apoptosis takes over.

If you could have lunch with any person, alive or deceased, who would it be and why?

There are many inspiring contemporary scientists that would be great lunch companions. I think that such meetings are certainly possible to arrange—I did it a couple of times and found the ensuing discussions enlightening. That is why I would choose Charles Darwin, whose Origin of Species is a masterpiece of intellectual elegance. I am really curious what the genius who laid out the conceptual framework of modern biology was like in direct interaction.

After a long day in the lab, what is your “guilty pleasure?”

A habit of mine that sometimes makes me feel guilty has to do with books. I usually try to plan carefully the novels that I read, because, frankly, who has enough time to read every single book that they come across? But I have to confess that I have a very soft spot for sci-fi novels from the last century and I am fully capable of immersing myself in those unfathomable worlds.