Back to Parent Page
HomeQ&AHow Does the Brain Learn Language? 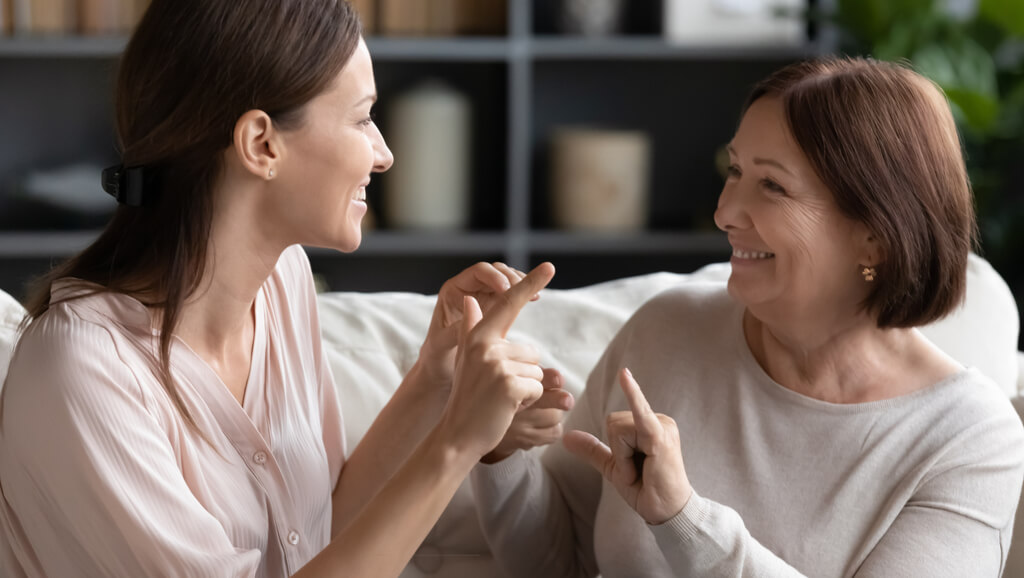 Are humans the only species that speak a language?

Many species communicate – in ways that work best for their bodies and for the environment they live in. For examples, honeybees communicate through both odor cues (pheromones) and a unique way of moving referred to as the “waggle dance” to let other bees know there is pollen nearby. Whales and dolphins use whistles and clicks at different pitches to convey information. Primates tend to rely on body language, including gestures and facial expressions, as well as sounds, to let those around them know how they feel. Yet, while many of these communication systems are quite sophisticated, they are not as complex as human language, and they don’t involve written symbols like letters, words, or sentences.

Some scientists have tried to teach primates sign language, as well as how to read pictures that represent words, with mixed success. Most experts agree that these skills, while impressive, are not language: While gorillas and chimpanzees are good mimics when it comes to sign language, they fail to learn syntax, the grammatical rules to form sentences.

Why do we need to learn a language?

Many evolutionary biologists think that language evolved along with the frontal lobes, the part of the brain involved in executive function, which includes cognitive skills like planning and problem solving. Early cave drawings suggest that our species, Homo sapiens, developed the capacity for language more than 100,000 years ago. But people are still debating why we need languages that are so complex. Certainly, as we’ve roamed the planet looking for food and shelter, having more sophisticated communication, including written symbols, has helped the species communicate with other groups, teach important skills, and strengthen social ties. It allows us to share information accurately and efficiently even across time—sharing data, stories, and advice with generations to come. And, of course, having more complex language gives us the ability to share more complex thoughts and concepts. It would be difficult to talk about the space-time continuum using only hand gestures!

How do we learn to speak a language?

Many animals are born already knowing the basics of their given communication systems, but humans take several years to learn a language. Studies of newborns show they are quite tuned in to the sounds that make up what will become their mother tongue – they’ve been paying attention to the sounds around them even in the uterus. Studies show a baby’s cries actually mimic the melody of their native tongue!

From there, babies learn how to speak through their interactions with others. They mimic the sounds they hear, practice syntax, and build up their abilities from there.

A similar pattern occurs when it comes to written language. It takes time to learn all the syntax and vocabulary to speak like an adult. Gradually, as their frontal lobes develop, children learn what they need to know to effectively communicate with the people around them.

Are some languages easier to learn than others?

Not when we are discussing your native language.  But when trying to acquire another language later, the difficulty can depend on the type of language. It is easier to learn another tongue when it shares similar sounds and syntax with your native tongue. Having the same alphabet helps, too! As we age, new sounds, as well as new symbols and grammatical conventions, can be more challenging to master.

Many children who are raised in bilingual homes, though, are able to master multiple languages at one time. In fact, provided they have ample interactions with native speakers, children can learn and master several languages. You can imagine a scenario where a young child has a Chinese mother and a German father but goes to a French immersion school. As long as that child is consistently spoken to in those different languages from a very early age, there is no reason why they couldn’t grow up speaking the three languages fluently. Most polyglots, or people who can communicate in multiple languages, are usually fluent in three to five languages.

Why is it harder to learn new languages as an adult?

Many studies suggest there is a critical or sensitive period for learning a language, starting at around 6 months of age and ending at puberty. During this time of life, the brain is particularly sensitive to language cues  and has increased plasticity for learning all things. Scientists developed the theory of the sensitive period  after learning about the so-called “Wild Boy of Aveyron,” a child in the 1900s  who was discovered living in the woods on his own, without the benefit of communicating with other humans, and, who never fully learned how to speak or read.

Other scientists argue that learning a second language is harder later in life because your brain has already laid down the tracks, so to speak, for your native tongue. Under this theory, our older brains are less adaptable, and that’s why it requires more work to attain new vocabulary and syntax.

Do you re-learn language the same way you learned it the first time?

People will sometimes lose language skills as the result of a brain injury or stroke, but many can re-learn their native tongue. How that happens differs greatly from person to person, based on their age, the amount of brain damage, and how hard they work to gain language function back.

Our brains do retain some of their plasticity well into old age. While it is not yet clear if these patients re-learn language in the same way they learned it the first time, they do benefit from recognizing and mimicking sounds, associating symbols and sounds, and a lot of practice speaking and listening to others.

How We Learn – 2021 Brain Basics article

The Cognitive Benefits of Being Bilingual – Cerebrum story from 2012

What Bilingual has Meant to Me – column by Guy McKhann, MD, on growing up in a home speaking English and Russian