Back to Parent Page
HomeCerebrumEye of the Needle 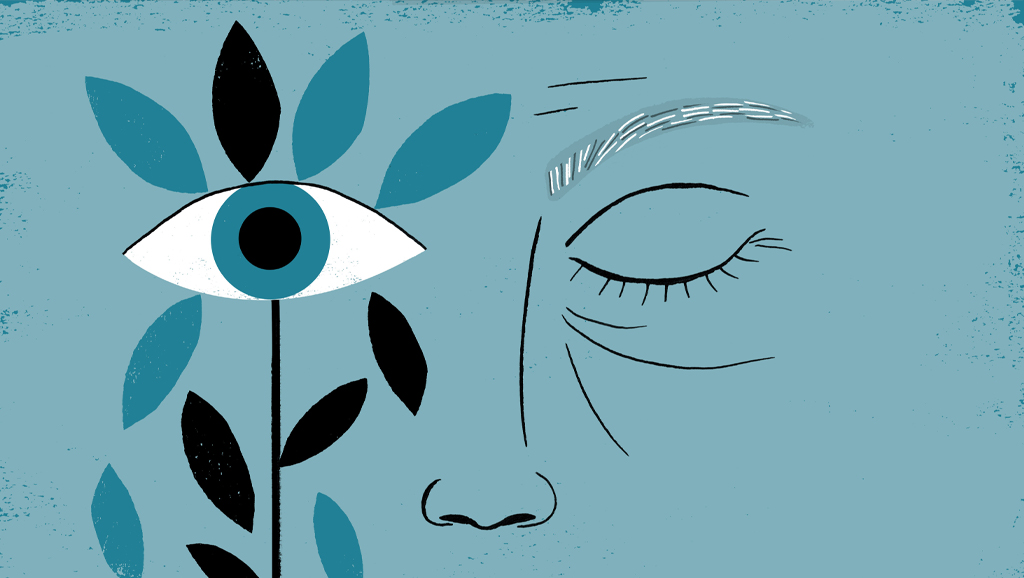 A 72-year-old lawyer who is pursuing his passion for photography in retirement was suddenly unable to take sharp, well-focused photographs. An examination of each eye revealed yellow spots in the macula, the central area of the retina responsible for sharp vision. The macula in the right eye was thickened and raised in height, substantially reducing and distorting his vision.

A test called a fluorescein angiogram, in which fluorescent dye is injected into an arm vein that travels to blood vessels in the retina for imaging, revealed a spot of intense fluorescence that enlarged over time, indicating the presence of abnormal blood vessels leaking plasma into surrounding tissue. An optical coherence tomography scan provided a two-dimensional optical cross section showing fluid beneath and within the right eye’s macula.

The patient had a condition known as age-related macular degeneration (AMD), common to about 200 million individuals globally and referred to as “age-related” because it is rarely seen in individuals younger than 60 years old. With people living longer and longer, it is estimated that by 2040, there will be 300 million individuals with AMD throughout the world. And besides the blurred vision that this patient was experiencing, other patients often complain about difficulty recognizing familiar faces; straight lines that appear wavy; dark, empty areas or blind spots; and a general loss of central vision, which is necessary for driving, reading, and recognizing faces.

Besides age, smoking is a universally agreed upon risk factor for AMD; hypertension and high blood lipids have been identified in some studies but not others.

Prominent factors leading to development of AMD are genetic defects, particularly ones that code for proteins in what is called the complement cascade—a part of the innate immune system, the body’s first line of defense against bacteria and other invaders. The complement cascade is activated by signals or molecular signatures that stimulate pattern recognition receptors, suggesting the presence of an invader.

While the complement system’s hair-trigger response rapidly fights invaders, preventing their growth and spread, it can also lead to false alarms when activated in the absence of an invader, resulting in damage to normal cells. To mitigate this liability, the body has developed systems to turn off the complement cascade. Some of the genetic variants that predispose one to AMD disable one or more of these fail-safe systems.

“I’ve worked hard my entire life, and now that I’m finally able to do something I really enjoy, AMD is ruining it,” my patient said, clearly frustrated. “If I’ve had genetic defects my entire life that never bothered me, why are they causing trouble now?”

I explained that the wear and tear of aging exposes cells’ proteins, RNA, and DNA, to the extracellular environment, in patterns that mimic those of foreign invaders. In a patient with AMD, normal aging is exacerbated by genetic differences that create abnormal deposits under the retina’s photoreceptors and/or retinal pigmented epithelial (RPE) cells. (Photoreceptors are the cells that respond to light and convert it into electrical signals, beginning the process by which the brain constructs images of the environment. RPE cells are a support system that helps to nourish photoreceptors, dispose of their waste, and provide a barrier between them and underlying blood vessels.)

These deposits, which are the aforementioned yellow spots that occur under the retina and were seen during the examination of the patient, are referred to as drusen. They develop gradually as patients with AMD age, which is why AMD most often occurs in seniors. The deposits contain aggregates of diverse proteins and other materials, particularly the waste of photoreceptors, that collect in the extracellular space. Because they are unlike anything normally present in the retina, the deposits are easily mistaken for invading bacteria or viruses, activating the complement cascade. (We know this because analysis of drusen has found fragments of proteins seen only in tissues in which such activation has occurred.) Activating the complement system results in bystander damage, particularly to blood vessels that supply the photoreceptors. To explain things, I showed my patient a schematic picture of a retina with AMD (see below).  Damage to blood vessels reduces delivery of oxygen and nutrients to photoreceptors and RPE cells causing gradually progressive damage referred to as “dry” AMD.

For a while the photoreceptors can survive the lack of oxygen and nutrients but function sub-optimally, making it difficult to read without bright illumination. But over time, they and their supporting RPE cells begin to die, causing blank spots in central vision. This progressive loss of cells in the macula, called macular atrophy, is an advanced stage of dry AMD.

In about 20 percent of patients with dry AMD, the lack of oxygen in photoreceptors and RPE triggers production of vascular endothelial growth factor (VEGF). This protein stimulates new blood vessels to sprout from those damaged by complement, providing an alternative source of oxygen that can slow the progressive damage to photoreceptors and prevent atrophy. The new blood vessels often leak, however, and fluid collects under and between photoreceptors. The blood vessels also produce substances that recruit cells from elsewhere to congregate around them, resulting in fibrosis (scarring) under the retina, which damages the photoreceptors and leads to macular atrophy. The resulting dysfunction, called “wet” AMD, was the cause of reduced vision in my patient’s right eye.

“What about my other eye?” my patient asked.

“Is it possible my condition might be treated with LASIK (laser-assisted in situ keratomileusis—reshaping the cornea) or a pair of glasses with a strong prescription?” he asked.

“I’m sorry but LASIK or a prescription for glasses would have no effect on AMD,” I answered. “Both simply change the focus on the retina. If the retina is diseased, neither approach can improve vision.”

My complex explanation about the cause of macular degeneration elicited a simple query: “Can anything be done?” Indeed, the bad news for my patient was that he had both dry and wet AMD, both chronic, vision-threatening conditions. But the good news was that academic and pharmaceutical research had led drug companies to develop proteins that bind VEGF, and injections of these proteins could improve his vision in his right eye.

His uneasy response to this was understandable: “Wait a minute, you’re telling me that the good news is that you want to stick a needle in my eye?”

“It sounds worse than it is,” I said. “We can numb the eye pretty well so you will feel mostly pressure and maybe a little pain, but it only lasts a second.” The injection deposits a large excess of the VEGF-blocking protein in the center of the eye. The drug diffuses into the retina and binds the vast majority of VEGF, and gradually exits the eye carrying VEGF with it. After a month there is none of the protein left in the eye. At that point VEGF can build up again, causing the vessels to leak again and fluid to re-collect in the macula. Then it would be necessary to inject the protein again.

“How many injections will I need?” he asked.

“Many, probably every or one or two months for the rest of your life,” I told him.

“I hope that’s a long time, and if it is, that will mean a lot of injections,” he said. “Is there an alternative?”

I told my patient that there is simply no alternative to injections. Prior to 2006, when this treatment became available, wet AMD meant permanently reduced vision to the level of legal blindness or worse. But blocking VEGF with injections improves vision by drying out the retina, and usually stops new blood vessels from growing and recruiting cells that result in fibrosis. Proof of the value of treatment is that many of my patients who have received regular injections since 2006 have retained excellent vision.

This patient wanted a guarantee that injections would improve his vision and maintain it for the rest of his life. That was not something I could promise. While most patients do very well with regular injections, a small percentage do not have complete elimination of fluid and growth of unhealthy blood vessels. These individuals are more prone to subretinal fibrosis and loss of vision.

In addition, many patients are unable to return regularly for the needed injections. I always caution my patients that sometimes life—for any number of reasons—gets in the way. A missed appointment is generally not a problem, but longer delays make subretinal fibrosis and vision loss more likely. During the pandemic, some patients were understandably anxious about visiting a hospital or doctor’s office. Sadly, some patients missed a number of visits and consequently lost vision.

Research on the development of new treatments to provide sustained suppression of VEGF shows great promise for treatment of wet AMD. The most advanced approach involves a surgically implanted device that contains a flange—a rim that sits on the outside of the sclera (connective tissue popularly called the “white of the eye”)—attached to a refillable reservoir. The device passes through the sclera into the vitreous cavity, a fluid-containing chamber lined by the retina. (see illustration below). A release control element in the device slowly releases a VEGF-neutralizing antibody from the reservoir into the vitreous cavity.

In the center of the flange is a self-sealing septum, covered by the conjunctiva to prevent infection from the environment. Periodically, the doctor will pass a needle through the conjunctiva and septum to refill the reservoir.

Two Phase Three clinical trials demonstrated that wet AMD patients who had implantation of the device, with refills every six months, had excellent visual outcomes—as good as results with monthly injections. These successful clinical trials may have paved the way for Federal Drug Administration approval for this new implantation procedure by the Fall.

Another treatment now in clinical trials uses a molecule that blocks VEGF receptors that stimulate the formation of new blood vessels. The chemical is incorporated into a biodegradable polymer and injected into the eye in the form of microparticles. The microparticles slowly release the inhibitor molecule, preventing leakiness from abnormal blood vessels for at least six months.

Finally, a gene therapy now in clinical trials utilizes a harmless virus to deliver a gene that encodes for an anti-VEGF protein. Injected under the retina, the virus carries the gene into retinal cells, where it makes the protein. Any of these approaches would eliminate the need for monthly visits for injections and improve long-term visual outcomes.

While there are as yet no approved treatments for dry AMD, two phase two clinical trials involving monthly injections showed promise. Each trial involved a different protein that blocked a different component of the complement cascade, and both slowed the progression of macular atrophy. Phase three clinical trials are currently underway.

I advised my patient that a treatment plan would most likely put him on the path to taking satisfying photos again. He was encouraged about his prospects for better vision, even if his response was a bit irreverent: “I’m certainly not as despondent as I was at the beginning of our conversation and, while it feels a bit strange to say this out loud: ‘Please stick a needle in my eye.’”

This article first appeared in the Spring 2021 issue of our Cerebrum magazine. Click the cover for the full e-magazine.