Back to Parent Page
HomeCerebrumEffects of Stress on the Developing Brain 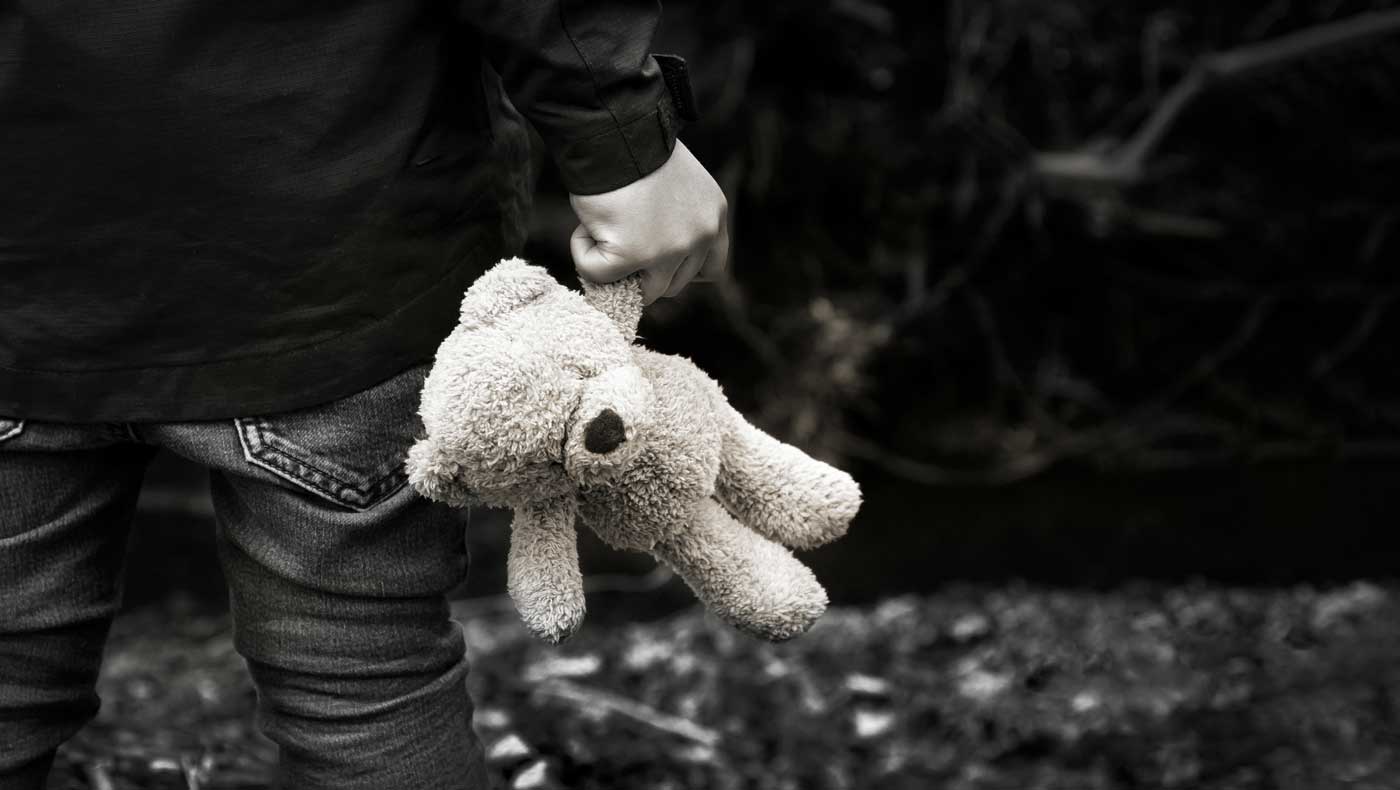 Dysfunctional families and distressed children go hand in hand, and there is now a growing body of science attempting to understand how early-life adversity translates into altered brain development and cognitive, emotional, and systemic disorders throughout the life course.1 Ongoing research on human brain and behavior development and studies using animal models of infants and mothers are providing insights into the singular importance of early-life experiences for later function. In particular, on the negative side, the studies are revealing the powerful and lasting adverse effects of early-life abuse and neglect upon the developing brain and body. Such abuse can result in poor self-control and emotional regulation and can impair cognitive development and increase diseases of the cardiovascular, metabolic, and immune systems. Yet the sensitivity of the developing brain provides an opportunity for improving outcomes and is leading to efforts to improve the consistency of supportive parental care.

The Effects of Stress on the Brain and the Body

The brain is the central organ of stress and adaptation because it perceives what is threatening and determines a behavioral response that may include fighting, fleeing, vigilance, and anxiety toward possible danger. The brain also determines health-damaging behaviors such as eating too much, smoking or drinking, and sleeping poorly. The brain regulates body processes through the nervous system, the neuroendocrine system, and the immune and metabolic systems, which work together as a nonlinear network that concurrently affects many body organs, such as heart, liver, kidneys and brain. The brain also responds to stress, sex, and metabolic hormones, which can alter neuronal architecture and alter behavior as well as the regulation of those body processes. For example, chronic stress, including sleep deprivation and jet lag, can produce changes in brain architecture, increase anxiety, alter mood, and decrease memory and cognitive flexibility. Fortunately, these changes in neuronal circuitry are reversible in a healthy, resilient brain. When they do not reverse after the stressor is removed, chronic anxiety and depression may occur that require treatment by behavioral and pharmaceutical means.

At the same time, with the epidemic of obesity and Type 2 diabetes, there is a new threat to the brain as well as to body health. Type 2 diabetes has damaging effects on the young brain as well as the adult brain.2,3 It impairs the capacity to learn and remember and has also been linked to increased risk for dementia. Thus counteractive measures, including diet and increased physical activity, are important for brain health as well as for body health.4

The social environment has enormous impact on the individual through the brain.5 Besides major life events, abuse, and neglect, it is the ordinary day-to-day experiences in family, neighborhood, school, and work that affect brain and body function and promote those health-damaging behaviors. Socioeconomic status (SES), which includes both income and education, is a very strong predictor of brain and body health, even when health behaviors and access to health care are factored out. Gradients of both mortality and incidence of disorders of modern life such as cardiovascular and metabolic disease have been described in developed countries, where those with the least education and the lowest income have the highest disease incidence, on average, and those at the top have the lowest disease incidence and longer lives, on average. And there is a linear gradient, with people in the middle showing intermediate levels of life expectancy and disease frequency, which is why the middle class should also be concerned about these health-related issues.

Moreover, the very perceptions of inequality6,7 in cities, states, and nations that have large differences between rich and poor have been linked to poorer physical and mental health for those who are not at the very top and a steeper gradient of cardiovascular, metabolic, and other diseases from low to high SES, as well as higher levels of depression, substance abuse, crime, and suicide, as has been documented in an number of recent publications.8,9

Brain development is a continuous process throughout life that goes through sensitive periods during which stressors and nurturing experiences can have lasting effects. Many adult diseases such as cardiovascular disease and depression (see Figure 1) have their origins in adverse early-life experiences, such as neglect and physical and sexual abuse, as was shown in the Centers for Disease Control Adverse Childhood Experiences Study.10 This study, carried out on a middle-class population in California, emphasized the fact that dysfunctional families and children are found at all socioeconomic levels. The range of physical, behavioral, and mental health disorders shown in Figure 1 is a dramatic demonstration of the power of early-life abuse and neglect to affect lifelong behavior and brain and body health. Yet this is the extreme end of a spectrum of influences; research and practical experience must help define the good and the bad. 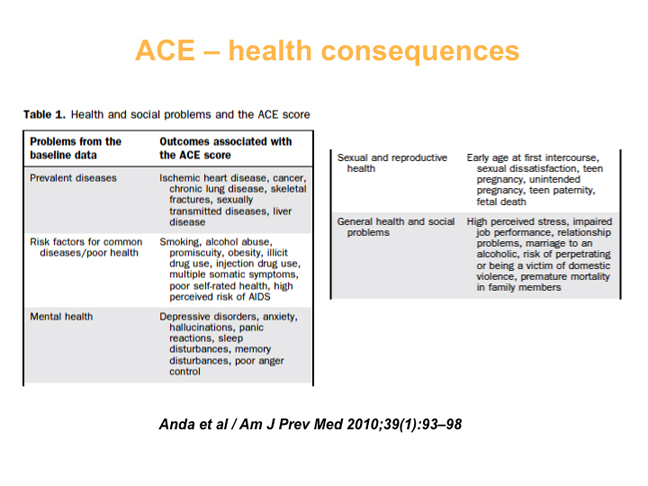 As far as the negative consequences, animal models have taught us that a mother’s prenatal stress can impair features of normal brain development and that prolonged separation of infant from mother also impairs other aspects of brain development and function. Furthermore, inconsistent maternal care and maternal anxiety—for example, from food insecurity—produce anxiety in offspring and appear to contribute to metabolic syndrome and predisposition to diabetes, which itself has adverse effects on the brain.

In one of the most striking examples, an infant rat becomes attracted to odors from the mother early in life before the fear system is developed. This attraction can occur even when the infant is abused.11 This paradoxical attraction of infant to the abusive mother allows the pup to survive, because the mother is the only source of nutrition. Indeed, the presence of the mother suppresses development of the amygdala, a brain structure involved in fear and aversive learning. While we do not yet know if the human fear system shows the same pattern of response to the mother and to stressors, these findings provide a new way of thinking about how and why abused children often become attracted as adults to partners who have the same characteristics as an abusive parent.

Indeed, studies on children growing up in adversity have added to the information gained from animal research. Chaos in the home and inconsistent parenting impair development of self-regulatory behaviors and can lead to substance abuse, earlier onset of sexual activity, bad decision-making, poor mood control, and poor performance in school. Abuse and neglect also lead to poor health, including increased obesity, cardiovascular reactivity, and increased inflammation, which can have lifelong consequences (Figure 1). Finally, lack of verbal stimulation in the home and other aspects of stress and chaos that increase anxiety, poor self-regulatory behaviors, and lower self-esteem can also impair the verbal ability and other aspects of cognitive function that are so important for successful learning.12

Animal models reinforce the notion that strong maternal care is key to good emotional, social, and cognitive development. Indeed, good maternal care can overcome some of the adverse effects of prenatal stress. Maternal care has long-lasting and even transgenerational effects that are epigenetic, that is, the product of experiential regulation of genetic expression. These animal-model studies have now offered some evidence that epigenetic changes seen in relation to poor maternal care in animal models can be seen in abused human subjects in their white blood cells. Such lasting, epigenetic effects of early-life adversity are evident in the increased incidence of obesity, chronic inflammation, poor dental health as a manifestation of that inflammation, and increased blood pressure.

Genetic differences also make a contribution, since certain variants of common genes (alleles) increase vulnerability to effects of adverse early-life experiences. However, these reactive alleles may also give rise to better outcomes in a nurturing environment. Individuals with these alleles have been termed “orchid children,” whereas those with less-reactive alleles are “dandelion children,” who can do reasonably well in any environment.13,14

Finally, consistency as well as quality of parental care is important for successful cognitive and social development. Exposure to novelty against a backdrop of stable maternal care is key.

What Can Be Done

In a companion article, Judge Cindy Lederman describes the desperate situation of children who have been deprived of nurturing stimulation in a healthy home environment and, instead, experienced verbal, physical, and sexual abuse and neglect. Thus, preventive interventions to reduce adversity and thereby help improve brain and body wellness for children must focus on the family. Programs like Head Start have worked best when the family environment supports the child and the child comes home to a stable and understanding environment. The Perry School Project is an example of this combination and has shown a large return on investment, not only in earnings and achievement for the individual but also for society, which will experience less crime, less need for special education and welfare services, and greater income tax revenue. Programs like Nurse-Family Partnership provide social support and education for first-time mothers and families, and the Harlem Children’s Zone Baby College provides this type of education in a class for expectant mothers and their partners. Yet, as Judge Lederman notes, society must not give up on those who have suffered the effects of adverse childhood experiences, as intervention on behalf of those babies and children will help them compensate for early-life stress. Such work requires investment of considerable time and effort and further underscores the need for prevention. 15

Individual differences in brain development, especially in the prefrontal cortex, which plays an important role in top-down control of behavior, emphasize that there is only so much that parents can do, apart from providing a consistent and supportive environment. Indeed, consistent and supportive parental care builds a foundation on which exposure to novel experiences and having parents set limits to behavior can foster positive development. Chaos and unevenness of emotional tone and behavior within the family impair the development of self-control and healthy emotional regulation. Fortunately, plasticity in the developing and adult brain can be guided by experiences, and remediation after problems have developed requires considerable effort but remains possible (see Lederman article for signs of hope). However, the most humane and cost-effective strategy16 for any society is to prevent as much as possible the development of these problems through interventions early in life by working with parents starting even before the birth of the child.17