Dana Alliance member Julie Korenberg, M.D., Ph.D., is a professor of pediatrics and the director of the Center for Integrated Neuroscience and Human Behavior at the University of Utah. She is an internationally recognized leader in human and molecular genetics and has dedicated her career to understanding the genetic underpinnings of Down syndrome and Williams syndrome, advancing development of better treatments and prevention methods.

As Down Syndrome Awareness Month winds down, Korenberg spoke about the past, present, and future of the most common chromosomal disorder, a condition that affects about one in every 700 babies. 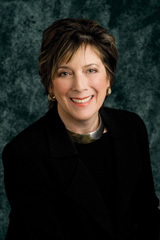 I was an intensely curious child, fascinated with the universe and the magic of the body. I went to the University of Wisconsin, Madison, for my Ph.D. in the 1970s and it changed my life. Through my work there, I thought that the insights from flies and plants would, with a few twists, provide keys to humans.

What really got me interested was that I strived to understand human behavior and make things better for people who didn’t get a fair shake when they were born. You have to remember to start with the human being. What you learn can be applied not just to that one person but to others.

What advancements have been made since you started and where do you see the field going?

We are making enormous strides. When we started studying Down syndrome, we knew almost nothing. Then we learned that it was genetic, which was a tremendous relief for families. They no longer felt it was a family shame. This was a very important change in society. These people with a disability had a reason for it.

An exciting advance has been that treatments to improve the memory problems associated with Down syndrome are emerging in our lab and others’ labs. Once we demonstrate safety in trials, we can test them in people to allow every child with Down syndrome to live the best life possible.

One of the things I’m interested in for the future is helping a woman’s egg to have a balanced number of chromosomes, preventing the extra one that can lead to a baby with Down syndrome. We’d like to allow children to be born as healthy as they possibly can. The goal would be to prevent the egg before conception, before sperm entry, from having that extra chromosome 21, which is the cause of Down syndrome for >95 percent of people. We still don’t know enough about the process that determines how chromosomes separate to stop it but we now have some exciting clues.

What kinds of steps can parents take to help children with Down syndrome reach a level of independence?

When people have a child with Down syndrome or see such a child, they assume they’re all the same, which they’re not. Parents who want their kids to reach independence should do the same thing as all parents: have high expectations! Maybe things take longer for a child with Down syndrome, but that’s really it. In fact, many parents tell me that their non-Down syndrome teenagers are much more difficult than their Down syndrome teenagers. But you do have to slow it down—they can understand things but you have to go slowly. Making sure they understand instructions certainly helps.

What are you working on right now?​

Somewhere between 40 and 70 percent of people with Down syndrome will eventually get Alzheimer’s disease. By age of 35 to 40, 100 percent of people with Down syndrome have the plaques and tangles that are characteristic of full-fledged Alzheimer’s. Obviously that’s suggesting something is going on with chromosome 21, because no other syndrome gets this. Not only is the risk higher, but it occurs 30 or so years earlier, too. We’re trying to figure out why. There is a gene that codes for part of what we see in plaques and tangles that is also on chromosome 21. That was a big hint, but we’ve had that hint for 25 years and still haven’t been able to figure it out, so it’s more than that. Promising insights from brain imaging and genetics reveal differences have already occurred in young adults with Down syndrome, unexpected and exciting. We’re still learning.