Two weeks from now, people all over the world will be taking part in activities organized by people who share our love for the brain. Brain Awareness Week is a time for everyone to pause from their busy schedules and find a way to celebrate and learn more about the organ that is responsible for everything we do. Not sure where to start? We’re here to help.

We wrote a recent post on making “Sweet Brains”—or colorful cupcakes that resemble brains—for those of you with a sweet tooth. We also took some time to try out “recipes” for do-it-yourself arts and crafts that are great for anyone wanting to sport the latest trends in brain-wear. 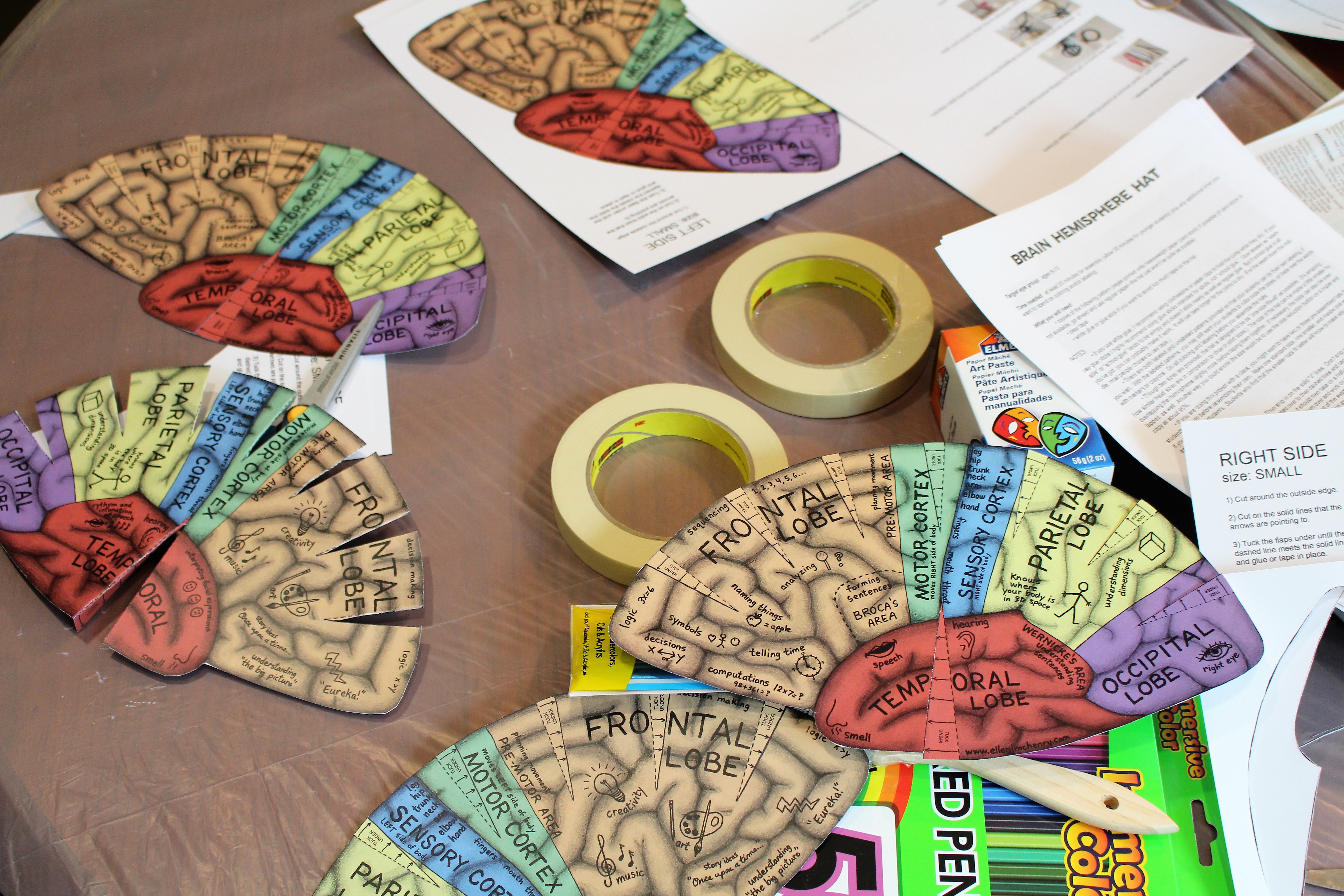 Designed by Ellen J. McHenry, these paper caps have been featured in science museums and institutions around the world, and translated into several different languages (French, Japanese, Danish, Estonian, Spanish, German, and Finnish). The patterns are free; all you have to do is download and print (card stock is ideal for a sturdier hat). 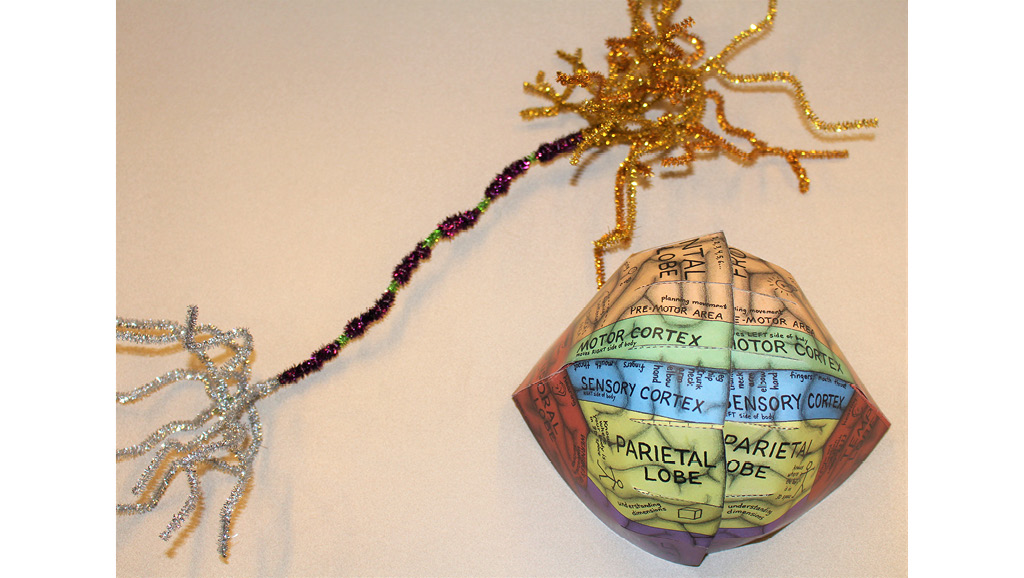 The purpose of the brain hemisphere hat is to learn about the major lobes of the brain: where they are approximately and some of their functions. Assembly is easy, as long as you have a good pair of scissors and a glue stick to hold it all together! McHenry offers different sized hats for children and adults. You can find the patterns in PDF form here. Now when people say, “Put on your thinking caps,” you really can! 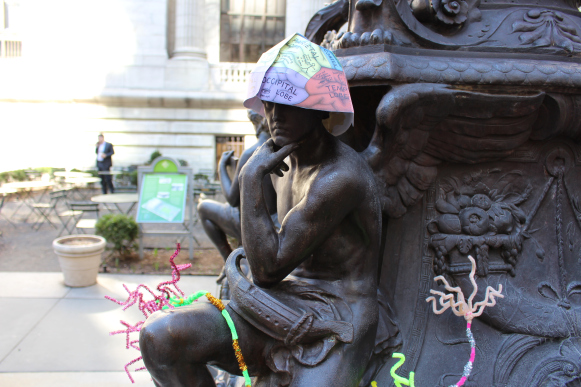 The next crafts we made are the beloved Pipe Cleaner Neurons from our BAW partner, NW Noggin (featured last year as one of our #Brainweek interviews). With an estimated 85 billion neurons in the human brain, these nerve cells are way too small to see in real life. However, by making these pipe cleaner versions, it becomes easy to learn the different parts that make up a neuron. They can be made as large or as small or as colorful as you’d like—It all depends on the pipe cleaners you choose. 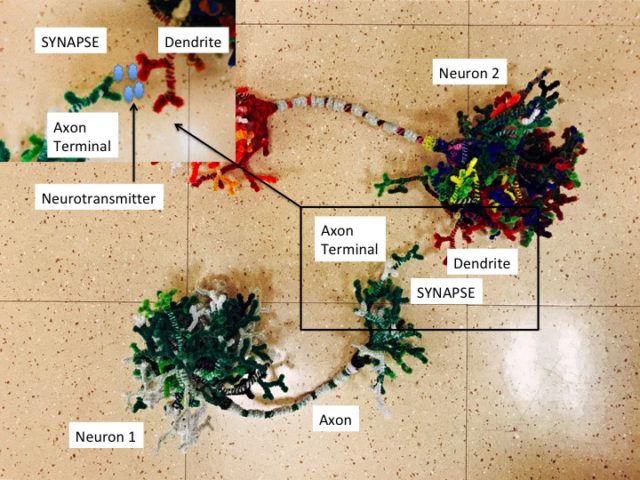 The instructions are concise, and it’s a project that requires very little setup. We found that cutting some of the pipe cleaners to add shorter “branches” of dendrites made them look even better. The last step is to create a nucleus to carefully place within the soma, or cell body. It’s small, but don’t forget it! 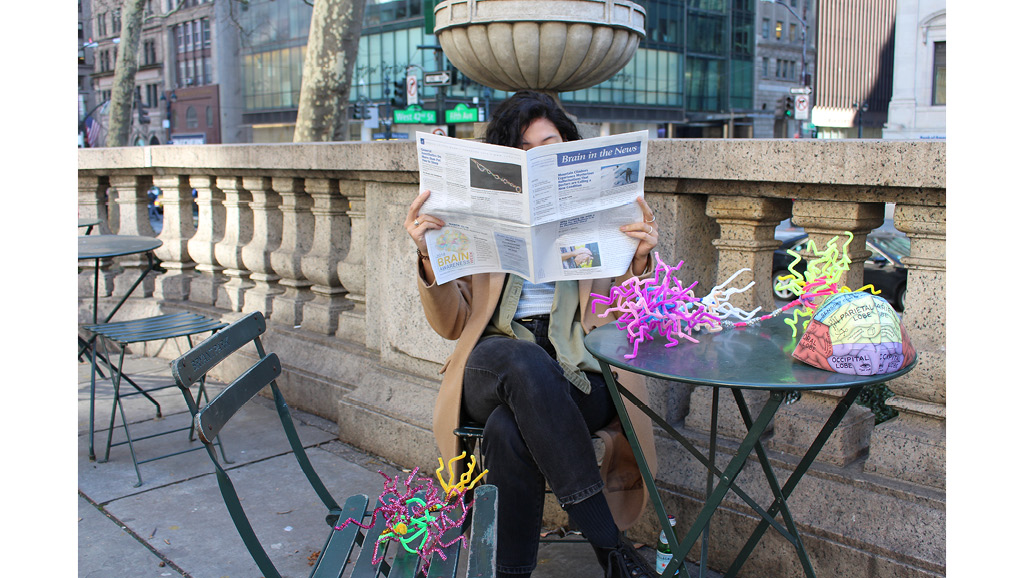 The most involved, but nonetheless rewarding, BAW craft project is the Homunculus Hat, courtesy of the University of Washington. This one takes the longest because of the wait time for drying, so plan to come back to this over the course of a few days. Using a bike helmet as a base, this hat is a fun, visual representation of areas of the brain that control certain body parts. It can get as detailed as you’d like; just be prepared to get your hands a little dirty! 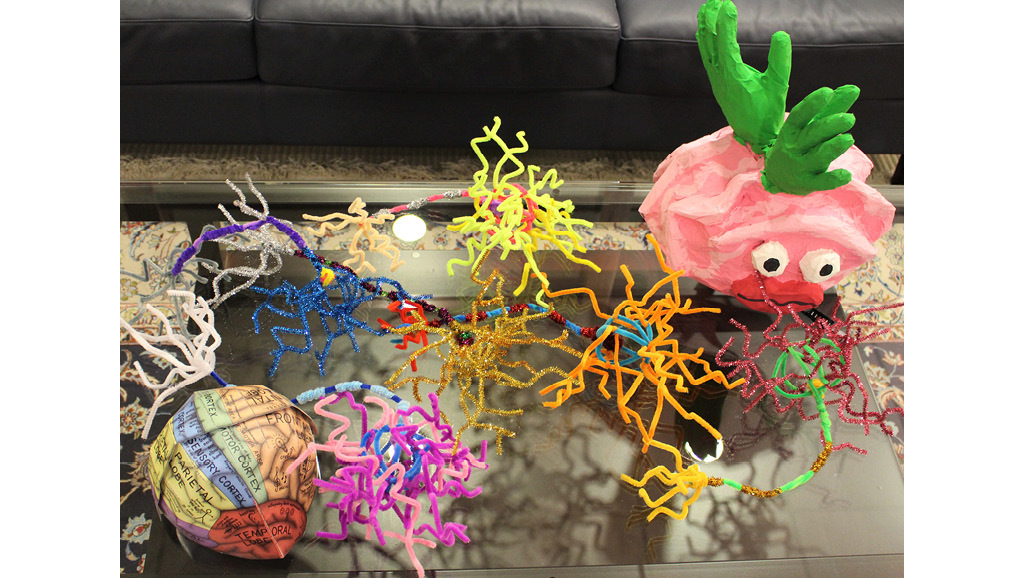 Making the homunculus hat requires newspaper, masking tape, papier-mâché paste, paint, and one pair of latex gloves. The instructions are a little brief—which we found was a good way to challenge our creativity. After taping rolled up newspaper around the helmet to cover any holes and create the valleys and ridges, or sulci and gyri, of the brain, we began the first layer of papier-mâché. While the first layer was drying, we began stuffing the pair of gloves with newspaper, so that it could maintain its shape. We attached the gloves to the top of the hat using more tape just before we applied the second layer of papier-mâché to whole thing. (We did three layers total to give the hat some real volume.) 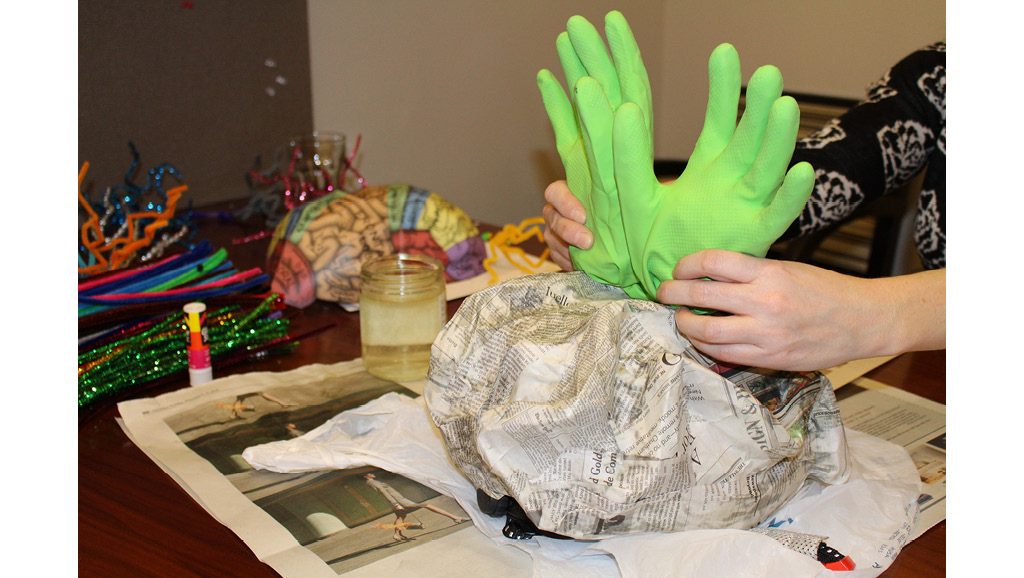 The Hemisphere Hats we made at the start of this post came in handy when trying to figure out the proper placement for the gloves because of its detailed map of the brain. The sensory cortex on the top of the brain is responsible for processing and sensing things such as feelings in our skin, pain, and visual and auditory stimuli. This is where we taped down the base of the gloves and later applied papier-mâché so it would hold. We also rolled up newspaper to make eyes and a mouth, which we placed on the left temporal lobe because of its role in processing sight, speech comprehension, and sound.

The last step is paint, which really brought the hat to “life”—It’s a fun project that brought us back to grade school art class and inspired a lot of laughter around the office! We wouldn’t recommend replacing your bike helmet with this one if you’re going out for a ride; though it would be more entertaining. 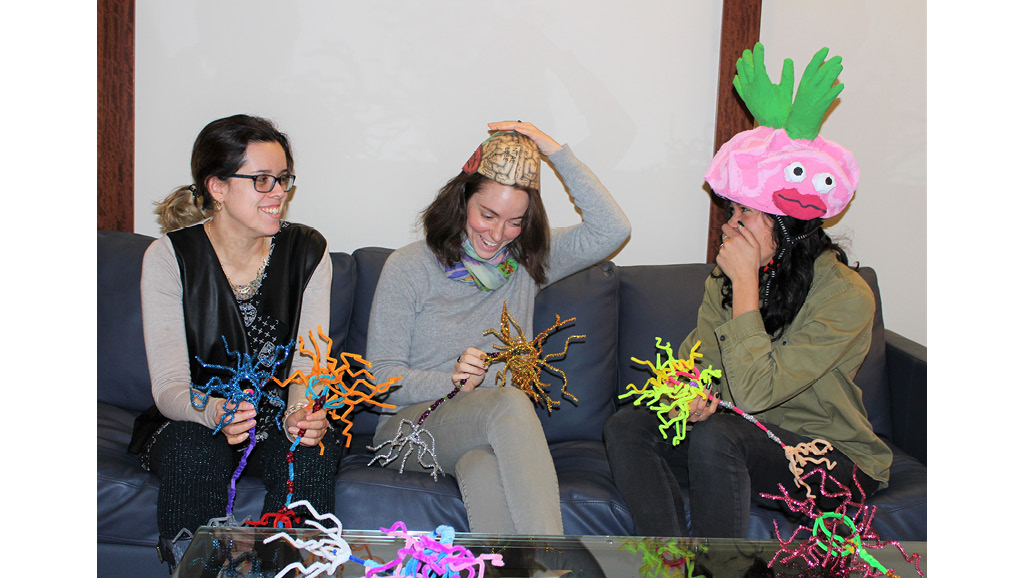 Brain Awareness Week is taking place this year from March 16 to 22. We will be covering events happening around New York City, as well as featuring work from our partners around the world. To get involved and find a free event near you, visit the BAW calendar on our site!