Back to Parent Page
HomeScientist Q&AsDeveloping a Theory of Mind 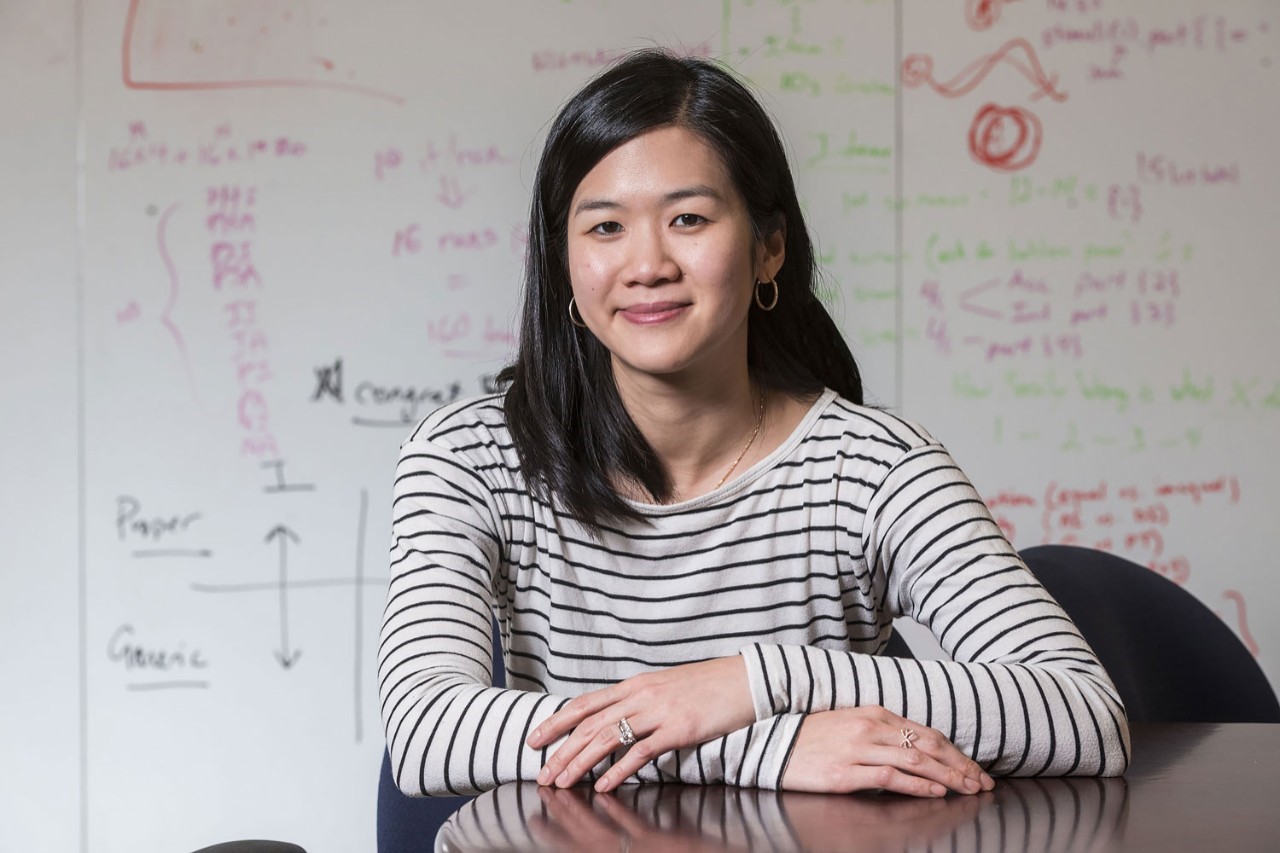 Developing a theory of mind (ToM), or the ability to consider the thoughts, intentions, and points of view of other people, is a key component of social interactions and interpersonal communication. It’s one reason why some psychologists and neuroscientists have suggested that people with autism spectrum disorder (ASD) may be lacking this particular type of reasoning. Liane Young, Ph.D., studies brain regions implicated in ToM processing, including the right temporoparietal junction (RTPJ) and dorsal medial prefrontal cortex (DMPFC), to better understand the neural deficits underlying ASD. Here, she discusses the importance of philosophy’s trolley problem, why social context matters, and how a better understanding of ToM could help one day create new interventions to help those with ASD.

What first interested you in studying theory of mind?

As an undergrad, I majored in philosophy to pursue my interest in bioethics. One of the first philosophical problems I encountered was the trolley problem. It’s a dilemma where a person has to decide whether it is morally permissible to turn a trolley away from five people and onto one person instead, killing him, but saving the five. Most people would say that’s okay. But if you start to change the details, and instead ask if it’s okay to push a man off a footbridge to stop the trolley from hitting five people further down the track, most people will change their answer: no, it’s not okay. So philosophers and psychologists have struggled to find a way to organize these conflicting intuitions regarding this problem, to come up with principles that might legitimize these intuitions, in a way that makes sense. One such principle has to do with a person’s intentions and is called the doctrine of double effect.

In the first case, you don’t intend for one person to get hit by the trolley. You don’t intend harm when you turn the trolley. It’d be great if that person weren’t on the other track. But in the footbridge scenario, when you push a man off the bridge, you intend for his body to be a trolley stopper, so to speak; you do intend that harm in order to save the five people further down the track. It seems like a plausible principle in so far as we think people’s intentions and mental states more generally are legitimate factors to consider for making moral judgments of actions.

At the time, there was a lot of work in social and moral psychology, such as work by Josh Greene, looking to see what brain areas are recruited when people consider these kinds of moral dilemmas. Some of that work suggests brain regions for emotional processing are in large part responsible for those judgments. But I realized there wasn’t as much work done focusing specifically on the brain regions that support mental state reasoning, or how we think about people’s thoughts and intentions. So I started doing work with Rebecca Saxe looking at how ToM and brain regions for mental state reasoning are recruited for moral judgements.

Why extend that work to high-functioning people with autism?

There is a task called the false belief task. One of the most popular versions is given to children about 4 to 6 years of age. It’s an object transfer task where one puppet, Sally, moves a ball into the basket and then leaves the room. Then the second puppet, Anne, comes in and moves that ball from the basket into a box. The question is, “When Sally comes back into the room, where will she look for her ball? The basket or the box?”

Young children tend to fail this task and say Sally will look for the ball in the box (instead of the basket where she last left it) because they have difficulty representing people’s mental states as distinct from the actual state of the world. The false belief task is supposed to be a metric for ToM. As it turns out, high functioning adults with autism tend to do quite well on this task, possibly because they use compensatory mechanisms to solve it. So we’ve been interested in looking at ToM during these tasks and, more relevantly, moral judgment tasks, to understand those mechanisms.

Thus far, the findings have been mixed. In some cases, we see atypical patterns of neural activation [in the brains of people with ASD]. In others, we see no difference between neurotypicals and high-functioning adults with autism. In fact, we recently published a paper, by my former graduate student Lily Tsoi, asking whether ToM brain regions distinguish between psychological and physical harms, and we didn’t see any differences between populations, despite the fact that both populations can discriminate between them.

What are the implications of that?

The short answer is that it’s complicated. ToM is complicated. Autism is complicated. And social cognition is certainly complicated. That’s why we are trying to tackle this problem from many different angles. We are looking at different kinds of moral judgments across different contexts, looking at both when outcomes are expected and unexpected. What happens when people behave in ways we don’t expect? That’s part of the reason why we need ToM: so we can interpret actions, expected or unexpected, across contexts.

Adults with autism are known for having difficulty predicting other people’s emotions and actions. What kind of brain activation patterns did you expect to see in the ToM areas—and did what you find surprise you?

As I said, the results have been mixed. You might expect we wouldn’t find any sensitivity to mental state information across the board in high functioning adults with autism. But we do find sensitivity in cases we didn’t expect, like in discriminating between psychological and physical harms. There, we don’t see any differences between neurotypicals and high functioning adults with autism. We’re still trying to figure out the implications of this.

In another ongoing study also led by Lily Tsoi we are comparing how neurotypicals and individuals with ASD discriminate between different kinds of social context, cooperative and competitive. We have found that the brain regions in neurotypicals discriminate between these different contexts, and we’re trying to figure out what are the key components that allow them to do so, and also whether the same or different patterns emerge in individuals with ASD.

We’re also asking some of these same questions in preschoolers. Remember the puppet task with Anne and Sally. Now imagine that Sally puts the ball in the basket and Anne comes in to put it in a different place for either a competitive or cooperative reason. Perhaps Anne is being cooperative: she thinks Sally forgot to put her ball away and wants to do it so Sally’s mother won’t get mad at her for leaving a mess. Or maybe she’s being competitive: Anne is hiding the ball to be malicious. We see that four-year-old children, for some reason, are more likely to pass the false belief task, that is, understand the mental state involved, when Anne is being mean compared to when she is being nice.

You can also imagine another task where you have to plant a false belief into someone else’s head to win some stickers. There are two cups turned upside down, and one has stickers underneath. To trick the other person, the child has to point to the location where the stickers are not—and they can do so cooperatively so everyone wins stickers if the other person points to the empty cup, or they can do so competitively, so they can get the stickers all to themselves if the other person points to the empty cup. What we are starting to find in that task, young 4-year-old children are better at deception in the cooperative context, when they are working together so that everyone gets the stickers. We are still trying to figure out why.

There is a lot of work in social psychology suggesting people have an easier time or spend more effort inferring negative mental states than positive ones—so maybe we’re better at ToM for competition than cooperation. Complementary work in evolutionary psychology suggests non-human primates have rudimentary ToM for competitive but not cooperative situations. Yet, there are other theories suggesting that in humans ToM may have emerged, and be most adaptive, for cooperation.

How does your work fit in with other studies looking at the neurological deficits underlying ASD?

That’s a great question; I don’t have a satisfying answer. I think that there will be some cases where we don’t see any differences in ToM where you might expect to see them. And there will be other cases where we will see some differences. That opens up another set of questions as to what accounts for the behavioral and cognitive impairments we see in everyday life. Are high functioning individuals with ASD relying on more sophisticated compensatory mechanisms? And if so, can we leverage those mechanisms for treatment or intervention? Because we do see that these regions, in some cases, are being deployed just the way they should.

The story is more complicated than “high functioning adults with ASD have impairments in ToM.” We do see that high functioning ASD participants do not distinguish in their patterns between intentional and accidental harms. And that’s quite a difference—because interpreting other people’s mental states, whether someone is trying to help or harm, forms the core of much of our moral psychology. We are now trying to square that with the fact that high functioning adults with ASD can distinguish between different kinds of harms in different social contexts. So maybe we need to go back and look more closely at features of mental states as opposed to social context. Are these individuals able to get more information from context? When the task focuses on features of mental states, is that where we will start to see deficits? It’s something we want to explore in the future.

You received a relatively small grant from the Dana Foundation. How did you use that as a foundation for these larger projects?

This grant was so important to allowing us to take a really targeted approach. We started with a specific but important question: How do neurotypicals and individuals with ASD differ in social and moral contexts, neurally and behaviorally? And the work from that proposal has really opened up a number of different avenues for future research, relating to really broad questions about social cognition. How do we learn about people? How do we update our impressions about people? What happens when our assumptions are violated? What does the development of these processes look like? So we started with a fairly specific set of questions that then led to these other questions that interface with a lot of new and exciting areas in social neuroscience.

Similar Brain Activation during False Belief Tasks in a Large Sample of Adults with and without Autism, PLOS One, September 2013