Back to Parent Page
HomeArticlesDementia and Gum Disease 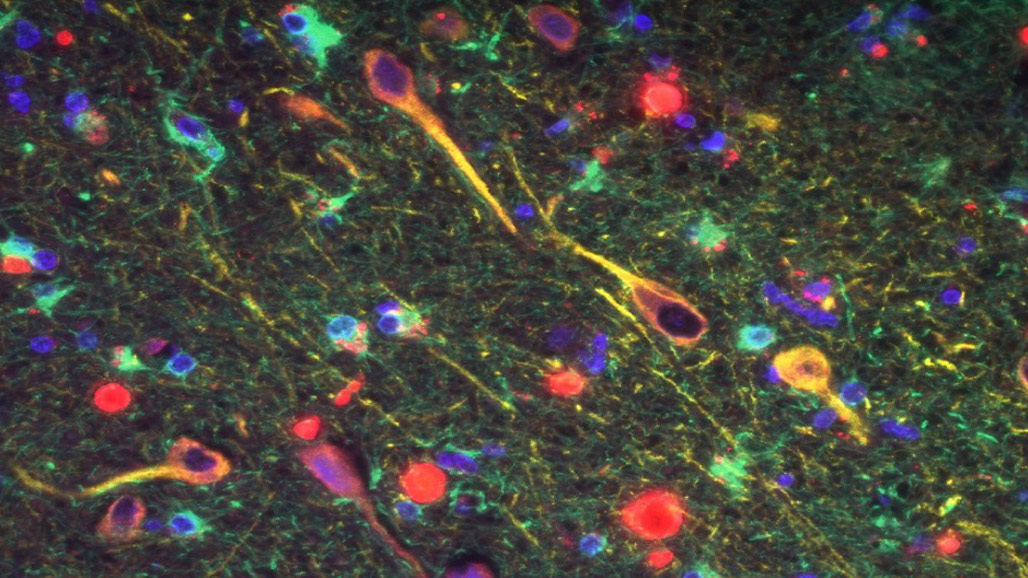 Gingipains in neurons from a brain with signs of Alzheimer's. Gingipains are stained red, neurons yellow, and astrocytes green. Courtesy of Cortexyme, Inc.

At a psychiatry conference in Tübingen, Germany, on November 4, 1906, Alois Alzheimer described the pathological hallmarks of a “peculiar disease of the cerebral cortex,” which now bears his name. Speculating on the causes of the disease, Alzheimer considered a possible role for infection, but this idea eventually fell out of favor. Since then, the amyloid hypothesis, which posits that Alzheimer’s disease (AD) is caused by the accumulation of toxic misfolded proteins in the brain, has dominated the field.

More than one hundred years later, the causes of AD remain elusive. Billions of dollars have been spent on research and drug development that target toxic proteins, but while many of these compounds alleviate Alzheimer’s-like symptoms in animal studies, none has proven effective in human clinical trials. Consequently, the big pharmaceutical companies have all but abandoned their efforts to develop Alzheimer’s treatments, and a growing number of researchers are questioning the amyloid hypothesis and looking for other explanations. [See: The Alzheimer’s Puzzle]

Evidence that microbial infection could play a role in the development of AD has been accumulating slowly since the 1990s, but has largely been met with ridicule and hostility. The idea now seems to be gaining traction, however. Numerous studies implicate a motley crew of pathogens, including those responsible for Lyme disease and pneumonia; four studies published in the past few months provide more evidence that the development of AD and other forms of dementia may be linked to the bacteria associated with chronic periodontitis, or gum disease. [See: Finding Links Between Microbes and Alzheimer’s Disease]

Several dozen studies published over the past decade show that periodontitis is closely associated with cognitive impairment and AD. Among them are post-mortem studies showing that Porphyromonas gingivalis, a bacterium involved in the development of gum disease, and gingipain, a toxic enzyme it produces, are present in the brains of Alzheimer’s patients. Until very recently, however, it was unclear if the presence of P. gingivalis in the mouth could cause brain pathology.

To test this, a team of researchers at the University of Illinois induced chronic gum disease in healthy young mice by repeatedly applying P. gingivalis into their mouths over a 22-week period. They then examined the animals’ brains and compared them to those of a group of control mice. The results, published in the open access journal PLoS ONE last October, showed that brain tissue from mice given the bacteria contained gingipain and also exhibited the pathological hallmarks of AD; that of the control animals did not.

An international study published in January replicated these results, and identified P. gingivalis, together with the toxic gingipain enzyme it produces, in post-mortem brain tissue samples from five AD patients. This study, led by Stephen Dominy, co-founder and chief scientific officer of the biopharmaceutical company Cortexyme, went one step further–the researchers designed and synthesized small molecule gingipain inhibitors, and showed that they reduced the enzyme concentration and Alzheimer’s-like pathology in their experimental animals’ brains.

Periodontitis is characterised primarily by receding, inflamed gums, and brain inflammation is now recognised as a core pathology of AD. Inflammation could, therefore, be a key factor linking the two – indeed, both studies show that exposure to P. gingivalis resulted in brain inflammation, and this might be interpreted as meaning that presence of the bacterium contributes to the development of AD by triggering an inflammatory response in the brain.

Since then, two far larger studies further strengthened the link between gum disease and dementia. In one, researchers at the University of Leeds recruited 4,400 participants aged 50 or older, all of whom were already involved in the on-going English Longitudinal Study of Ageing, to investigate the possible relationship between oral health and cognitive function.

Over the course of 12 years, participants reported how many teeth they had remaining; rated their own oral health to the researchers; and performed cognitive tests to assess memory, executive function, and processing speed, all of which are known to decline with age, and particularly in those at risk of developing mild cognitive impairment and dementia. Analysis of the data revealed that poor cognitive function is associated with poorer oral health and higher risk of tooth loss in later life.

An even larger, population-based longitudinal study from South Korea produced similar results. The South Korean government provides mandatory healthcare for all its citizens, including biannual health screening examinations for everyone over the age of 40. Researchers from Seoul National University were able to collect and analyze the medical records of more than 260,000 people, all of whom were given a clean bill of health or were diagnosed with chronic periodontitis, in 2003-2004.

The team followed up with these participants until 2015. Because of the comprehensive data at their disposal, the researchers could evaluate the relationship between gum disease and dementia despite various lifestyle factors that might confound the results. Their analysis showed that chronic periodontitis is associated with a 6 percent higher risk for AD or vascular dementia, and that this held true even after factors such as smoking, alcohol consumption, and physical exercise were taken into account.

In April, Cortexyme announced the launch of the GAIN trial, an international multi-site phase 2/3 clinical study designed to evaluate whether a gingipain inhibitor called COR388 can slow or halt the progression of AD. Researchers at several sites across the United States are enrolling patients, and additional trial centres in both the U.S. and Europe will follow suit in the coming months. The aim is to recruit at least 570 participants of 55-80 years of age who have been diagnosed with mild to moderate AD; more than 90 sites on both sides of the Atlantic are participating.

According to Dana Alliance for Brain Initiatives member Adriano Aguzzi, a professor of neuropathology at the University of Zurich, the link between dementia and gum disease is weak at best. “Such ideas have been around for decades, and currently there is a lot of enthusiasm for them, but I’d be extremely careful,” he says. “The [studies] are interesting, but the data are unimpressive, suggesting that the effect–if any–might be minor.” He adds the important caveat that correlation does not imply causation: “People with incipient dementia may not take proper care of their teeth, and therefore have gingivitis.”