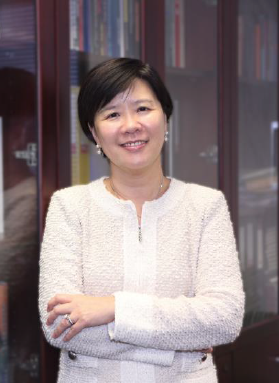 Nancy Y. Ip, Ph.D., is the Vice President for Research and Graduate Studies, the Morningside Professor of Life Science, and the Director of the State Key Laboratory of Molecular Neuroscience at The Hong Kong University of Science and Technology (HKUST). She is also Foreign Associate of the US National Academy of Sciences, Foreign Honorary Member of the American Academy of Arts and Sciences, Fellow of the World Academy of Sciences, and Academician of the Chinese Academy of Sciences.

My team and I were interested in the hypothesis that innate immunity is associated with the pathogenesis of Alzheimer’s disease (AD). The immune protein interleukin (IL)-33 was an interesting candidate for study due to its critical roles as an alarmin and a pleiotropic cytokine. Earlier investigations suggested its association with AD by demonstrating reduced IL-33 gene expression in AD brains. Furthermore, our examination of IL-33 function in individuals with mild cognitive impairment–the precursor AD–also revealed compromised IL-33 function

Thus, our research strategy examined the effects of replenishing IL-33 under pathological conditions. When the protein was injected into AD transgenic mouse models, the results were remarkable. Neuronal communication, and memory formation and retrieval, were significantly improved while inflammation was reduced. Even more extraordinary was that the memory deficits could be rescued within a week of IL-33 administration. These findings were exciting. They highlighted the use of IL-33 as a potential treatment for AD and clearly demonstrated the role of innate immunity in the pathogenesis of AD. The discovery also called attention to the importance of studying a complicated multifactorial disease such as AD from several angles. We are now working in collaboration with strategic partners towards translating these ground-breaking findings into clinical treatments for humans.

I am optimistic that in the future, we will gain enough ground in our knowledge of the disease to be able to develop improved disease management approaches. After decades of research, the mechanisms underlying AD pathology are still unclear. In recent years, we have also witnessed some disappointing setbacks where promising new compounds have failed to meet expected clinical end points in human clinical trials. But at the same time, there have also been many successes in the field, such as discoveries of new proteins, pathways, and molecular targets, which have enhanced our understanding of AD. Meanwhile, technological advances such as nanotechnology, iPSC technology, and gene editing are resulting in the development of innovative approaches to study brain systems. There is also an increased multidisciplinary collaborative effort occurring as it becomes evident that to unravel the pathology of multifactorial brain disorders such as AD, the brain needs to be studied in parallel with other body systems. Overall, the field is heading in the right direction. Our collective knowledge of the brain circuit, neural pathways, and the sophisticated mechanisms underlying brain functions is rapidly expanding, and every new discovery is a step closer to better diagnostics, disease modifying treatments, and potential cures.

What inspired you to incorporate traditional Chinese medicine into your research? What have you discovered through your investigations?

Traditional Chinese medicine (TCM) has a long history of use in China with well-documented benefits in enhancing health and alleviating diseased conditions. Detailed investigations over centuries on the pharmacognosy, plant chemistry, pharmacology, and clinical applications of a vast range of medicinal herbs have resulted in a tremendous wealth of valuable information. Thus, TCM represents a vital resource in both basic research and drug discovery.

Incorporating TCM into my investigations over the years has greatly enhanced my work. For example, using a knowledge-based strategy, my team and I harnessed centuries-old information to identify specific TCM herbs as a starting source for potential neuro-drugs. Through this approach, we successfully identified a portfolio of novel and promising drug leads from TCM herbs with potential therapeutic applications in neurodegenerative and neuropathological conditions.

Another example of the importance of TCM in research can be seen by my team’s recent discovery of EphA4 inhibitors as clinical interventions for AD. After demonstrating the role of impaired EphA4 signaling in AD, we sought to identify small molecule EphA4 inhibitors to block this pathway as a possible therapeutic intervention. A compound, rhynchophylline, from the herb Uncaria rhynchophylla was identified from a TCM database with the ability to reduce cognitive impairment and AD pathology in AD mice. We are now optimizing this TCM-derived compound for further preclinical development.

What are your hopes for the China Brain Project? Why do you think China decided to initiate such a major project now?

Through innovative approaches in basic and applied research, the China Brain Project aims to advance understanding of complex brain processes under normal and diseased conditions, as well as to develop powerful brain-inspired intelligence. The project takes a different approach from other recently-established large-scale brain projects in that it focuses on the processes at the circuit level, and seeks to apply the findings towards developing novel brain-machine interfaces and effective clinical interventions for early diagnosis and treatment of neurological diseases.

My hopes for the project lies with the contributions it will make to advance the field, and how new discoveries will complement those from other large-scale brain projects around the world. There is still much we do not know about brain processes and pathologies, but with synergistic approaches fueled by multidisciplinary collaborations across national borders, efforts to understand brain functions and develop effective diagnostics and treatments for neurological disorders will be greatly elevated.
The timing of the project is in line with the country’s neuroscience development. With its robust infrastructure, advanced technologies and capabilities, and the advantage of a large, technologically-adept and dynamic pool of skilled individuals, the country is well-positioned to successfully undertake such an ambitious project. Furthermore, due to China’s huge population, researchers have access to a large patient population. This corresponds to vast numbers of patient samples for basic and clinical research, and facilitates recruitment of volunteers (both patients and age-matched controls) for clinical trials.
With a growing aging population and rapidly increasing prevalence of neurodegenerative diseases, China is facing a future healthcare crisis similar to most countries and urgently needs new therapeutic solutions. In fact, China has one of the fastest growing elderly populations. From 1990-2010, the number of Alzheimer’s cases in the country doubled from 3.7 million to 9.2 million, and China is projected to have 22.5 million cases of Alzheimer’s disease by 2050.

Throughout your career, what has changed with respect to women in the neuroscience field? What advice would you give to a young woman starting a career in neuroscience?

When I first started my career, there were few women scientists in the field. Today, the number of women scientists has increased greatly, which is wonderful to see. However, studies show that worldwide, women continue to be underrepresented in the field. The gender disparity has been attributed to a lack of support, fewer opportunities, as well as young women consciously leaving the field due to perceived difficulties of juggling family life with the demands of a science career. In some countries, these obstacles may be further exacerbated by prevailing cultural attitudes. The good news is that the issue of gender disparity in neuroscience (and science in general) is being recognized and acknowledged in most countries, and academic institutions have begun to make policy adjustments, such as flexible grants, flexible work hours, and child-care services, to ensure a level playing field.

I was very fortunate during the early stage of my scientific career to have great teachers and mentors, who provided invaluable guidance and inspired me to work hard towards my scientific aspirations. My advice for young women just starting their careers is to pro-actively seek out mentors. Mentors provide support, encouragement, and invaluable guidance on research and career paths, which can provide young women with the courage and confidence to pursue their dreams. Young women today also have greater access to information and resources, such as professional organizations and networking groups, to help them navigate the early years of their career. It would be to their advantage to make full use of these support systems.

As our only Dana Alliance member in China, what would you like your fellow neuroscientists to know about the neuroscience community in your country?
It is an exciting time to be involved in neuroscience in China, with a wealth of opportunities in advanced pioneering research at both institutional and individual levels. Science and technology has developed rapidly such that it has become a fundamental aspect for socio-economic development. The government has established state-of-the-art infrastructure comprising specialized centers and robust technology platforms. A vast amount of resources has gone towards education and training. Meanwhile, the influx of overseas-trained Chinese scientists over the past decade has further enhanced the quality and level of research activity in the country. By developing strategic frameworks for research, education, and training, these returnees are helping to narrow the gap between their locally-trained colleagues and their international counterparts while building bridges and facilitating communication between the two communities.

China also has a number of advantages unique to its culture and population. For example, China is the leader in TCM-related research, with thousands of years of knowledge of the benefits and applications of different herbs and herbal formulations, which can greatly facilitate basic and applied research. China is also emerging as a leader in primate brain research. An additional advantage is the country’s large and relatively homogenous population, which can be harnessed to facilitate genetic studies aimed at determining the genetic basis of neurological diseases.