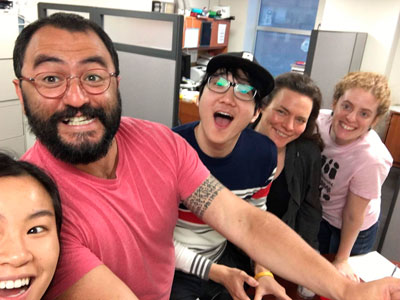 Cristian Zaelzer-Perez (in pink shirt) and some of the participants in the Convergence Project.

Each year, the Society for Neuroscience recognizes outstanding neuroscientists who have strongly added to public education and awareness about the field. The Dana Foundation sponsors these awards. This year’s award was presented to Cristian Zaelzer-Perez, Ph.D., from the McGill University Department of Neurology and Neurosurgery and the Brain Repair and Integrative Neuroscience (BRaIN) Program of the McGill University Health Centre (RI-MUHC) during the society’s annual meeting, in Chicago, on Tuesday.

Q: Was it a conscious decision for you to do a lot of education and outreach, as well as research?

Dr. Zaelzer-Perez: Yes. In 2016, I found myself reflecting on my career as a neuroscientist. In the contributions that my work was making to the overall advance of the field. In the apparent rise of anti-intellectual movements. And in my prospects to find a permanent position as an experimental researcher.

I found myself thinking on the funding crisis that seems to spread within governments that base their policies in populism and not in evidence. I found myself blaming that for the limited opportunities to get a job in academia. I am Chilean-Canadian, and I see the reduction in investment under most of the current administrations. That made me think, “the prospect to find a job with his market is not going well.” To get a position nowadays, you compete with hundreds of well-qualified scientists in a market that asks you no just to excel in what you do, but also drive the space shuttle and being able to grow potatoes on Mars.

Then I thought: The public votes for officials who do not see a high value in science, because science is not a relevant subject in their daily lives. And in a world constantly bombarded with distracting information, science does not get enough relevant time for people to keep it on the agenda. Particularly if they do not hear from the scientists.

We are horrible at communicating science to the public. We are awful at making this an issue.

There is evidence everywhere in the field of scientific communication: in the education field, in the neuropsychology field, and even in neuroscience. Teaching science, the way we are doing it today, just does not work anymore, if it ever did. We have to find new ways to keep relevant.

And while I was continually fighting about how we communicate science  and against misinformation on Facebook, I realized the only way to change things was by doing something.

The Convergence Initiative that you started includes formal coursework, inviting collaboration among scientists and artists and then public sharing of their work together, and less-formal public talks and events. How did you decide on this balance?

I am Latin American, so to me, conversation and social celebration are key to building trust and strong ties. While I was doing my research to understand the basis of our communication problems, I stumbled on the concepts of deficit- and two-way engagement models. The former refers to the classical method we use today to share information: We see a gap in knowledge, we bring the student to class, we lecture them, and we leave happy thinking we filled the gap. That model is ineffective, especially when you are sharing information with communities that have no formal training in science. The second model, two-way engagement, describes a horizontal way to share knowledge. Both parts learn from each other in an equal position, like a conversation between friends. This model is the one that actually creates trust in people.

Now here is when it gets really interesting. Research suggests that when you engage in a conversation, your hypothalamus secretes oxytocin. Oxytocin has a strong effects on a brain area called the amygdala; it reduces its activity. The amygdala, among other functions, triggers strong emotions like fear. When oxytocin reduces the activity in the amygdala, its “calm it down,” and this reduces anxiety. The result seems to be the development of trust. Even more impressive, the amygdala also acts as a blocker for our reason by inhibiting the activity of the prefrontal cortex, the brain area that helps us to reason. So, when the activity in the amygdala is reduced, the prefrontal cortex gets back in action.

Conversation, social engagement, a program where students see themselves as partners and positions of power are erased, are natural producers of trust.

We can’t pretend that someone will see the importance of performing neuroscience if we do not believe in the importance of what they are doing in their own lives. So, lectures at Convergence are just ways to understand our varied languages. The real work happens in the collaborations, where trust is built.

Was it difficult to organize the many partnerships involved in making interdisciplinary projects?

There is no way that a project will always run smoothly, especially when it involves so many stakeholders. However, the Convergence Initiative has the most amazing partners you could ask for. If something such as luck exists, I must say I got it when I launched the project and started to contact people. In the BRaIN Program of the Research Institute at McGill University Health Centre, I got amazing support from the leader and the manager of the program, Dr. Keith Murai and Dr. Andrée Lessard. With their support, I contacted the chair of outreach for the Canadian Association for Neuroscience at that time, Dr. Katalin Toth, who immediately offer the support of CAN for the project. Then, I wrote a letter to invite the dean of the Concordia Faculty of Fine Arts to the challenge. My letter was reviewed multiple time by my colleagues until I took it and sent it, waiting for the best. One day later, we were coordinating a meeting with Dr. Rebecca Duclos, dean of the faculty of fine arts, and pk langshaw, chair of the department of design and computation arts. With those fantastic partners, we have walked routes, discovered tricks, and advanced the work of Convergence. Is not that challenges do not exist, they do, but the people leading the institutions that work with us are an example of leaders.

What is most satisfying about connecting to people this way? What was most surprising?

The work of Convergence is rewarding in so many levels. I thrive when I hear my students realizing that the struggles faced by them are not unique. Science, as a method, helps us to wonder about the world and establish protocols to try to understand it. But as a method, it also has its limitations. When you expose scientists to other ways of exploration, it creates a consciousness of those limitations and makes us better practitioners of science. Meanwhile, when we open the method and philosophy upon which is based to examination and critique by the arts, we create an unprecedented opportunity for understanding the same concepts that make science communication difficult. From there, learning new ways to talk about science becomes fairly easy.

For artists, the opportunity to access uncharted land is always fascinating. The reactions, questions, and solutions send me over and over back to my early days in the lab, a time when I could spend weekends working and late hours on the bench just to explore a little bit more of those fantastic phenomena.

From all those amazing experiences, however, my favorite is : The research questions triggered by the research done on our labs, the solutions, methodologies, and materials used to explore such questions. The final pieces where science and art marriage in perfect balance. The moment when the artwork is exhibited to the public.

It never gets old when the artist explains the science behind the work in detail with no effort. When the scientist feels proud to have learned new skills in the art studio to contribute to the artwork. And the public appreciating a piece of work that reveals itself as a complex and fascinating topic, as neuroscience is. 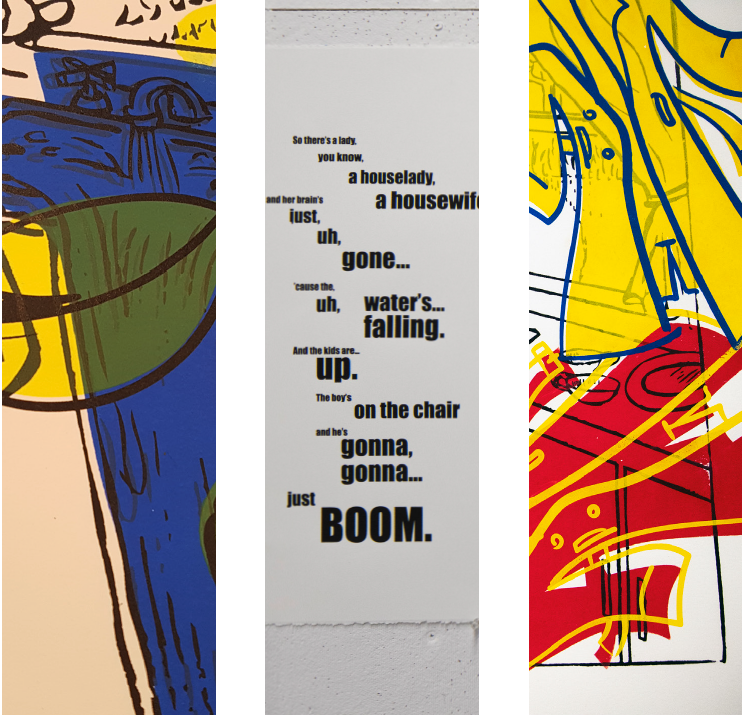 How important is it to you to do outreach now?

It is becoming my career. Apart from my work in the lab, I teach neuroscience to fine art students and science communication to scientists at Concordia University. Also, I became the ArtScience advisor for the faculty of fine arts of Concordia University. We are working to develop new initiatives to create better links between science and art. Convergence itself is expanding—we are opening a residency program soon to allow artists to work in science labs, and scientists to explore studio space.

Did you have a model or a mentor for this work? Have any advice for fellow scientists on reaching out?

Back in 2016, one of the things that moved me out of the permanent complaining on social media was the work of younger generations and people in minority groups. Most of the work done today in science-communication and outreach is done by these people: people who are not established in the scientific field, people who do not fight in equal conditions for opportunities in academia. People who understand that to create equality, you have to make knowledge and education more accessible. Women, people of color, Latin Americans, LGBTQ+, and young people, 18- to 24-year-old fellows. I get inspired by them every day.

I grew up very happy, with few resources in a low-income neighborhood in Chile. I never felt like my life was unfair. But at 31, I realized that certain things become normalized when they should not, like staying inside the closet. There are opportunities to make things better, but only those who feel uncomfortable with the status quo will fight the fight. I feel proud to be inspired by them.

Science communication is our struggle to make the life of others better by sharing knowledge that reaches people. It will create more support for what we do, but at the same time, it will create more equality and justice. It is bigger than just getting more funding, it is about making the world a better place for everyone. It contains the solutions to the global crisis that we face today, and it is fundamentally in parallel with policies and action today.

What advice I have for fellow scientists trying to reaching out? Fight the fight, don’t let anyone tell you that is not possible because we humans have a hard time changing, our brains resist change. But change is the one force that propels evolution, and only those who evolve survive.