The year 2010 has been marked by a landmark development in the field of regenerative neurology: The first U.S. Food and Drug Administration (FDA)-approved clinical trial of neural stem-cell therapies for a major neurodegenerative disease, amyotrophic lateral sclerosis (ALS). A prototypical motor neuron disease, ALS is a fitting target for the trial not only because of recent developments in the field of spinal cord regeneration, but also because of the suffering and tragedy inherent in the as-yet-untreatable paralysis of virtually all body muscles while a patient’s awareness remains intact.

A century-long dream in basic and clinical neurology, regenerative neurobiology returned to the center of public attention during a New York Academy of Sciences conference held in New York City in the early 1980s.1 Since then, the field has gone through a number of experimental and conceptual shifts, including, most notably, the appreciation of the widespread activation of cell-death programs written in the genome of all vertebrate animals suffering from neurological disease; the discovery, in the 1990s, of a host of naturally occurring molecules (peptides), termed trophic factors, that modulate or suppress these cell-death programs in mammalian organisms; and the reemergence, in the early 2000s, of cell therapies using neural stem cells after disappointments in early clinical trials with trophic peptides (see figure). 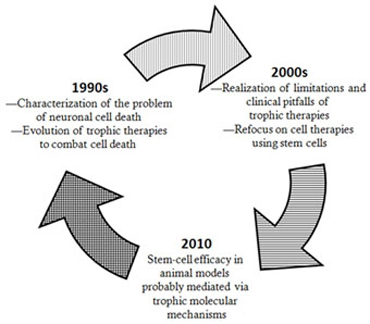 Scientists introduced stem-cell therapies as interventions that work presumably without directly interfering with cell-death programs. They were designed to replace dying or dysfunctional neurons regardless of the mechanism of neuronal demise. Still, it is possible that these therapies’ greatest contribution is the local manufacture and release of trophic peptides, as well as the delivery of these peptides to sick nerve cells with greater accuracy and in larger quantities than would be possible with conventional injections of trophic peptides into muscle or under the skin. In lieu of intramuscular or subcutaneous injections, neural stem cells can differentiate into neurons and transfer trophic peptides to other neurons via synapses. This is a great way to give trophic treatment that no one would have thought possible ten years ago.

In the 1990s, scientists identified more than five different trophic peptides that promote the survival and function of motor neurons. This discovery inspired optimism in the ALS research field. By 2000, however, researchers had deemed several clinical trials unsuccessful or unsafe, and any future optimism was thwarted by the prevailing view that the spinal cord, lacking cells and signals that promote regeneration in adult humans, may not be an ideal environment for new growth.

Three years ago, it came as a pleasant surprise when investigators discovered that neural stem cells—precursor cells that can divide only a few times and then give rise to mature cells of the nervous system, such as neurons and glia—can successfully survive and differentiate into mature neurons when injected into the adult spinal cord.2 The observation that such newly differentiated neurons make contacts with motor neurons in the host spinal cord—including motor neurons of animals with a genetic form of ALS that greatly resembles the human disease—was the first demonstration that motor circuits can be reconstituted with the help of stem cells, at least to a limited degree.3 In addition, scientists found that grafts of neural stem cells in the spinal cord help relieve paralysis and improve the overall survival of rats and mice with genetic forms of ALS. This spurred new enthusiasm for the consideration of clinical trials in humans.4, 5

Everything that goes into isolating, culturing, and grafting neural stem cells—indeed, all types of stem cells—affects the therapeutic outcome. Where and how you pick the initial cells, how you grow them, what chemical and other treatments you expose them to before grafting, how many you graft, and how exactly you graft them: All these factors are relevant to the outcome.6 Our recent success in preclinical therapeutics with neural stem cells in models of ALS,4, 5 which led to the clinical trial described in Dr. Glass’ article, may have well been the result of initially isolating these stem cells from the spinal cord. Cells isolated in such a fashion have positional and other cues that optimize their maturation when we restore them to their environment of origin. The endowment of these cells with positional and other cues might also have hampered their potential to form tumors, as occurs with neural precursors derived from human embryonic stem cells. The fact that these spinally derived stem cells were cultured in monolayer (they were not allowed to form three-dimensional structures in the culture dish) was probably also instrumental in their taking on a neuronal cell fate, as they were uniformly exposed to factors promoting neuronal differentiation in the medium and were allowed only limited cell-to-cell communication.

What we have today are nerve cells differentiated from stem cells that can communicate and possibly support the function and survival of injured motor neurons. We do not yet have a working recipe for making new motor neurons in animals or people. For the purpose of treatment, we heavily utilize the support that grafted neural stem cells can provide for motor neurons, but it does not appear that our grafts can actually replace sick motor neurons at this moment. Dr. Glass’ clinical trial will likely tell us to what extent this is sufficient.

It often takes decades of careful science, and quite a bit of good luck, to break ground in new therapies for the complicated disorders of the nervous system. ALS is the first major neurodegenerative target of clinical trials using neural stem-cell grafts. Trials using similar cells in patients with spinal cord injuries are also under way. With more investigation and, hopefully, some good news from the ongoing trials, we may consider using such treatments for other degenerative and traumatic diseases of the nervous system in the future.