Back to Parent Page
HomeArticlesClosing the Language Skills Gap Among Children 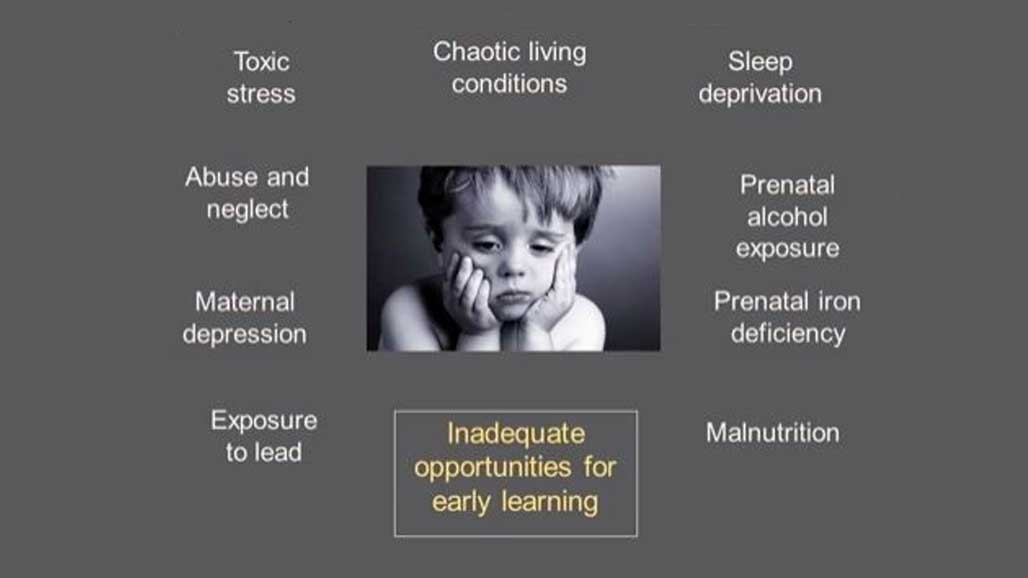 A recent study comparing the test scores of 40 million US children found that sixth-graders in the poorest school districts score four grade levels behind children the same age in the richest districts. More surprising, perhaps, were the gaps within a district, researcher Anne Fernald said during a forum at the American Association for the Advancement of Science (AAAS) in Washington, DC, on Sept. 18.

“Within a given district, there are big gaps, both in SES [socio-economic status] and in achievement, between white children and black and Hispanic classmates,” she said. For example, the Berkeley [CA] Unified school district, in aggregate, tests slightly above average, but when divided by ethnicity, “the white sixth-graders, almost all from affluent families, are testing around the eighth-grade level, while their much-less-advantaged minority classmates are around the fifth-grade level.”

“Some of the largest gaps between white children and their minority classmates emerged in some of wealthiest communities in the United States, like Berkeley, and Chapel Hill [NC], and Evanston [IL],” she said. Studies over the past 40 years have shown that these achievement gaps are robust and persistent, and that they predict later outcomes, such as graduation rate and lifetime earnings. [See how your district compares: The New York Times has an interactive map using the study’s data.]

These differences are already present before these children set foot in school, Fernald said. “Children from wealthy, more-educated families are higher in ‘school-readiness’ skills than are children from less-advantaged families. This gap stems from many sources, some of which she listed on a slide, reproduced at right. “But even when these other damaging conditions are taken into account statistically, there’s one factor that remains particularly potent: inadequate opportunities for early learning.”

How early? She and colleagues have worked to identify measures in the youngest children that would help them trace how and when language fluency develops. One measure is how fast babies respond to spoken words and instructions, such as do you see the puppy? She showed the reaction time of the same child at 18-, 24-, and 30-months old [see video clip, below]. At first, he reacts in a pretty-fast 1200 milliseconds, but by 30 months, he’s doing it at around 200 ms. That’s roughly the same speed most of us adults are reacting at.

“I’m speaking 200 words a minute, and you’re following that,” Fernald told the audience. “To be able to do that, you have to be able to anticipate, to listen ahead, and to make do with little bits of acoustic information, and not wait till the end of the sentence.”

One example: A mom says, Look at that kitty on the bench! “If you’re slow to get ‘kitty,’ ‘bench’ roars off without you… But if you get ‘kitty’ quickly, you get [learn the new word] ‘bench’ for free.” This “fluency of understanding,” the ability to grab words as they go by and predict what comes next, “turns out to free up resources for learning what comes afterward, which is why [measuring] these early processing skills also predicts language and cognitive abilities later on.”

Using measures like these, she and her fellow researchers tested babies in upscale environments (around Stanford for English and in ‘Palo Alto’-equivalent areas of Mexico City for monolingual Spanish) and lower-scale environments (rural California and around San Jose).

Data from English and Spanish both show a six-month gap in language processing skill has emerged by the time kids are 24 months old, she said. “The more-worrisome finding is this: It’s not until 24 months that the group of low-SES kids reaches the level of efficiency that the high-SES kids started at (at 18 months).”

One reason is exposure: According to much-cited but now questioned research published in 1995, by age 3 years, children in advantaged families heard 30 million more words directed to them than children in disadvantaged families. “The ‘30 million word gap’ is now a buzzword, a slogan–you see it on billboards, at least in Oakland–and it’s a huge and seemingly precise number,” Fernald said. “But it misses a very important point: Sheer quantity is not the goal.” It’s rich vocabulary, elaboration, helping kids make connections and see relationships that speeds fluency; sentences like, “Here’s your bear, with little ears, just like yours” versus “Here’s your toy.”

“Infants who hear richer and more positive language from caregivers develop stronger processing skills and learn vocabulary more quickly,” she said. “We can encourage families to talk with their babies not just a lot but in rich detail,” while always remembering and respecting that families come from a range of cultural traditions.

Picking up on the latter idea, speaker Maricela García, CEO of Gads Hill Center in Chicago, described how the community-based organization’s home visiting program for early childhood education helps low-income families succeed in school and life. Gads Hill has served its neighborhood since 1898, assisting a continual stream of immigrants, first mainly from Germany and other parts of Europe and, since the mid-1940s, from Mexico.

Nowadays, Gads Hill’s central tenet is “building education success,” because they’ve found that a family’s economic conditions can improve in “a single generation when children have access to quality education,” García said. “We provide linguistic and culturally competent programs to 4,000 children and their families from birth through high school graduation, the majority on early childhood education.”

Almost 300 children take part in Gads Hill’s home-based programs; 89 percent of homes have at least one parent working, 100 percent are living at or below poverty level. “Staff have to be able to communicate well with families and also have to understand the cultural dynamics of the families,” she said. “For example, understanding the strong emphasis on family as opposed to the individual, the important role of community life, and the approach that these families have to mental health issues and services.”

Critical to the method is building trust with the mother, the child’s first teacher. Then program workers share learning tips by explaining and modeling methods in the home using the language the mother is most fluent in.  “We identify a corner, even if it is very small, where there is a dedicated place that we call the ‘family educational resource center’—three-shelf bookcase, where we put the books, toys, etc.–to create a learning environment that is accessible and visible.”

The relationship workers build, “is not just about the child, it’s really focusing on the stability of the family,” García said. They work to help “build a family of strengths,” including identifying risk factors in a child’s development such as maternal depression, poor parenting practices, and lack of support to the child because of family dynamics. “For the women we work with, post-partum depression is a cultural expectation that breaks down. Mothers of Mexican origin expect to have the extended family taking care of them during recovery, whereas here … they are on their own.”

In the past four years, she said, all of the children have received developmental screenings, and the around 10 percent who are found to have issues receive extra support. Parents report more-positive interactions with their children, and 70 percent say they read to their children 3 to 5 days a week. “That is remarkable for us, because we know that poor families have so many stressors that the last thing they want is to really sit down and read. So this is a tremendous accomplishment, but we want to see 100 percent and we’ll see which are the ways we can use to get to it,” she said. While their community and programs benefit from academic research and evidence-based interventions, she wishes there was more research into best practices for the home-based interventions.

This past year Gads Hill also has added to its goals, García said. “Because of the growing income inequality in our society, we need to start focusing, in addition to everything else, in partnering with job-development and job-placement agencies to be able to open up opportunities for those parents so that we don’t wait to see that the children are going to do better than them but we also try to create some opportunities [for] the parents.”

In addition, city and state cuts in programs like English as a Second Language have led to more language and cultural isolation for the families of Gads Hill and elsewhere, she said. “Now is not the best time in our society to be an immigrant:” Discrimination and racism, “painful wounds in our society, affect a significant portion of our population, and immigrants with Latin American origins are pretty much targets of those.”

At the federal level, signals are mixed, said Libby Doggett, deputy assistant secretary for policy and early learning at the U.S. Department of Education. “I think this country is a little bit divided–and certainly Washington is– in terms of how much the federal government [should do], what is the role of federal government in actually trying to help address some of these issues.”

“The growing inequality in America is very entrenched, very structural, and obviously it’s a challenge for us to do something about it. But I’m happy because over the past eight years, this administration has been willing to take it on,” through challenge grants and “the bully pulpit,” giving speeches across the country about the need to do more to keep all kids on track to be strong citizens and contributors to the US economy and society.

Doggett highlighted the Maternal, Infant, and Early Childhood Home Visiting Program, which has goals much like Gads Hills’, as well as increased funding for Head Start programs and more “promise neighborhoods.” Grants for pre-school development, Race to the Top early learning challenges, and grants to test new practices are among the incentives to states and communities to do more to close the gap.

“We know that focus makes a difference; we’ve seen that,” Doggett said. “We know that evidence really makes a difference–it doesn’t make the difference we’d like it to at this point, we need more policymakers to look at evidence and act on it. We know that money matters; we’ve got to have more money in the system. We know that time really matters; you’ve got to have time to test these things and to put them in place. And we also know that policy matters. So I hope you all will take this challenge of working with us, because we need policy leaders, we need regular folks, we need parents, we need researchers, all working together to really improve the lives of our youngest children in this country.”