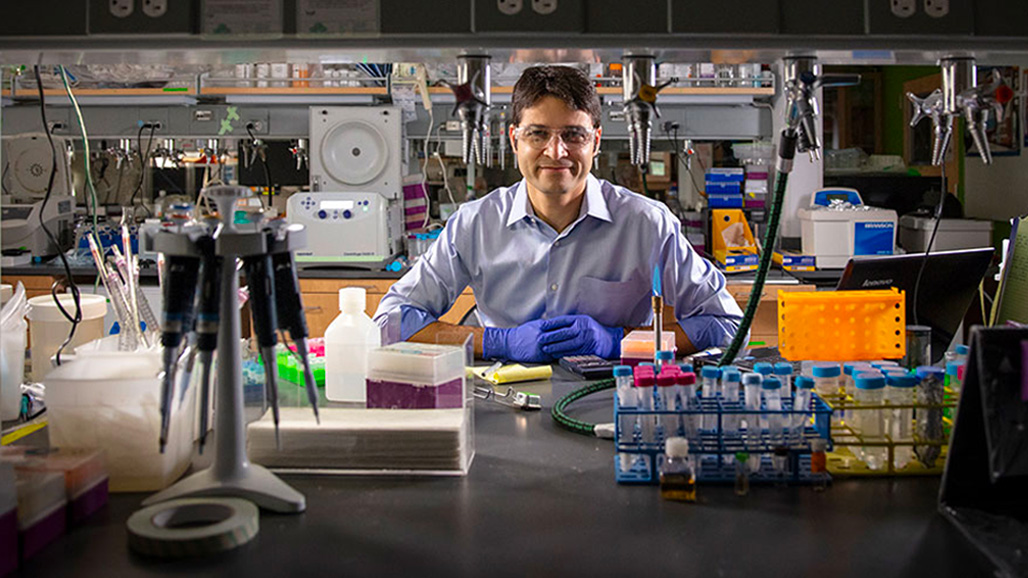 
One of the most challenging aspects of studying the brain is that it is so hard to access in living organisms. The very signaling that could help scientists better understand thought, emotion, and behavior occurs deep within the recesses of the skull. While neuroimaging techniques like functional magnetic resonance imaging (fMRI) and ultrasound give some insight into those processes, it remains a challenge to understand the brain’s most basic biology in vivo.

Such challenges were why Mikhail Shapiro, Ph.D., a professor of chemical engineering at Caltech, who studied neuroscience as an undergraduate, found himself dissatisfied by the techniques available to study brain function at the time. Instead of trying to make do as he continued on his studies, he switched tracks to biological engineering after graduating with his bachelor’s degree. He decided to further his interest in understanding the brain by building the tools he wished he had access to as a student, focusing on innovative molecular technologies to both image and manipulate neurons in a non-invasive manner. One of his lab’s recent discoveries involves a novel “erasable” contrast agent. A contrast agent is a magnetic dye that is used with neuroimaging to make certain tissues or proteins easier to see. This “erasable” type can be turned on and off to help researchers better highlight areas of interest. Here, Shapiro discusses the importance of having the right contrast agent for neuroimaging work, the benefits of an “erasable” agent, and why his lab is now focusing on ways to use ultrasound to understand dynamic changes in cells.

Why is having the right contrast agent so important to trying to better understand brain function?

The brain didn’t evolve for experimentalists to look inside of it and see what’s going on. So, if we really want to see what’s happening, we have two choices. One, we can try to leverage whatever kind of signals that naturally exist inside the brain. There are a few things like electrical potentials that we can record with electrodes. We can also measure changes in blood flow or blood oxygenation that correspond indirectly to neural activity. But if we want to see things at the molecular level at the synapse or inside neurons, then we need to introduce the right contrast agent that allows us to see those molecules because they themselves cannot reveal themselves.

What are the some of the biggest challenges to developing these kinds of contrasts – as well as the other sorts of tools you said that you wished you had as a neuroscience student?

There are several. But one of the biggest is that the brain is an organ that is fully encased in the skull. There are a lot of techniques that work well in a dish – you can look at cells under a microscope. But it’s much more difficult to look at them in a living organism. There are plenty of wonderful fluorescent proteins, for example, that can help you look at gene expression, calcium levels, or voltage in cells when those cells are grown in a dish. But when you use those same agents in the brain, it’s much harder to do. When you want to look deeper, it becomes much more challenging. You need to use forms of energy that can safely permeate the brain. That’s why we’re interested in things like sound waves and magnetic fields. With those, we have to invent ways to couple those forms of energy with what happens inside of neurons or the other types of cells we may be interested in looking at. So, we are working on creating molecules, ideally ones that are genetically encodable so the cells can make them in a very specific way, that have unusual physical properties that allow them to interact with sound waves or a magnetic field.

What is the benefit of having an “erasable” contrast agent?

It’s much easier to detect something that’s blinking as opposed to something that’s always turned on. Consider those flashing bicycle lights. When people cycle home at night from work, having blinking lights is a safety feature that makes it easier for motorists to see them. It’s the same exact idea with imaging. If you see a dark spot or bright spot on a scan, it might be your contrast agent or some signal you are looking for, but it may be an artifact. If you can make that spot blink, or if you can turn it off and on in a precise way, you can be much more confident that it’s the signal you are trying to detect.

You use magnetic nanoparticles to get those blinks. What are they and how do they work?

When people have thought about MRI contrast agents in the past, they’ve typically considered things that contain metals. Let me make really tiny little magnets made of iron oxide and put them into the cells I’d like to look at. And many researchers have had success with that. But it’s quite difficult to get cells to make their own nanoparticles with strong magnetic properties. They also present a contrast problem. It can be hard to distinguish them from other things that may be going on in the cell.

As we showed in our Nature Materials study, you don’t need an iron particle to be able to produce MRI contrast. Instead, we can do it using air, because the magnetic susceptibility of air is different from that of water. So just having a little pocket of air is sufficient to produce contrast in an MRI. It turns out there are these little genetically encodable protein nanostructures that are filled with air called gas vesicles. And they allow you to produce different kinds of contrasts that you can use to see signals, with both magnetic resonance and ultrasound as well as other imaging modalities. You can see the gene expression happening in cells using MRI.

This is where the erasing part comes in. It’s hard to erase a normal magnetic particle because it’s a solid object. But if you just have a little pocket of air, you can erase it by breaking the pocket apart. In this case, if you apply ultrasound to the nanoparticle, and the pressure of the soundwave is above a certain point, the little structure will break. You can kind of think of it like a ping-pong ball being crushed. The air inside of the ping bong ball will dissolve out into the surroundings and is gone forever. So, you’ve now taken this little contrast agent and erased the main thing that gives it is contrast. You can take MRI images, then use a regular ultrasound like you would for diagnostic imaging, to erase the contrast that you see. When it happens in lockstep, you can be confident about where the MRI contrast is coming from.

How might that help us better understand inflammation in the brain?

The idea is that you could use it to track immune cells in the brain – and this is one thing we’d like to do in the future. You can watch macrophages or T-cells as they enter the brain during neuroinflammatory processes and then track them as they turn on genetic programs that correspond to them being activated. That would allow us to better connect the expression of these genetically encoded contrast agents to promoters in the cells that correspond to them becoming activated.

Could these agents be used in a clinic or doctor’s office?

Right now, it’s all for research. But one of our laboratory’s goals is to develop better ways to visualize and control the function of cell-based diagnostic and therapeutic agents inside the body. There’s a lot of work going on with cell therapies, like immune cells being engineered to fight cancer or probiotics that can go into the gut and release anti-inflammatory compounds. What we’d like to do, over the long term, is incorporate some of the genes we’re developing for non-invasive imaging into the therapeutic cells that will be sent into patients so we can track where those cells go and what they are doing. Right now, as we inject these cell therapies into people, it’s a bit of a black box. It can be hard to tell where the cells actually go and if they are performing the functions they were designed to perform. We’d like to be able to do that non-invasively.

We’ve been doing a lot of ultrasound work in recent years for both imaging and modulating the activity of cells. The attraction of ultrasound, compared to magnetic resonance, is that it’s much more accessible. You can find them in most doctor’s offices, and they are relatively inexpensive to use. It’s also safe and easy to use. We want to be able to image the function and location of cells in the body using this technique. We just published a paper in Nature Chemical Biology that shows we can use ultrasound to look at the activity of enzymes in live cells. We engineered the same gas vesicles so the signal they produce under ultrasound imaging is changed when enzymes are active. We call it an “acoustic biosensor.”

Thinking further into the future, I’d like to be able to genetically modify organisms so you can see the activity of all the neurons at the same time. It’s the kind of thing we can already do in small brain regions with calcium or voltage imaging. But, instead of using light, I’d like to be able to do that with sound or magnetic fields across the entire brain in an experimental model. I think we can do it.