Back to Parent Page
HomeArticles#Brainweek: Our Sensational Brain 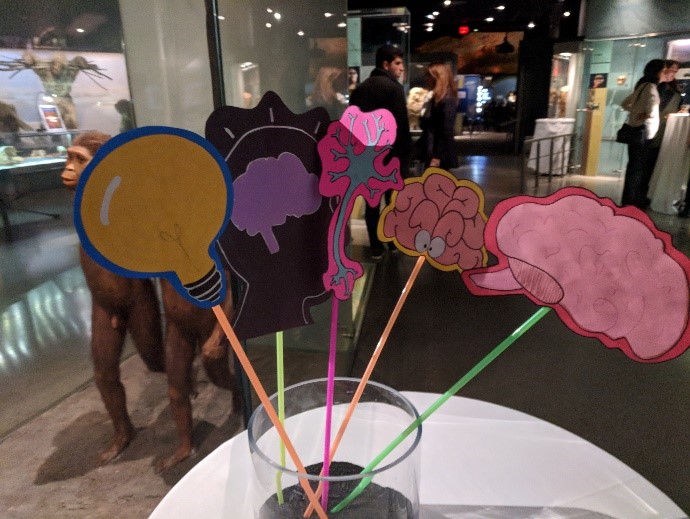 Brain props at the AMNH for a fun photo opportunity and to get in the spirit of celebrating the brain during Neuroscience Night: Our Sensational Brain.

The American Museum of Natural History (AMNH) in New York City presented “Neuroscience Night: Our Sensational Brain” last Thursday night in celebration of Brain Awareness Week. Using interactive activities, the event showcased the astounding capabilities of the human brain and the how it works in concert with our senses to interpret the world around us.

In the main hall, the first station was based on the travelling exhibition, “The Beautiful Brain: The Drawings of Santiago Ramón y Cajal,” and asked visitors to view and draw stained Golgi rat neurons through a microscope. The neurons resembled the drawings by Santiago Ramón y Cajal, appearing as black, web-like structures against a white backdrop.

At the next station, there was an opportunity for people to hear their own neurons firing. AMNH Neuroscience Educator Rosemary Puckett placed electrodes on a specific area of a participant’s arm and then directed the person to bend and straighten the arm. A crackling noise increased in intensity as the arm straightened and bent more rapidly, and was faint when the arm was not moving. She explained that this sound represented the electricity of the nerves firing in the neuro-muscular junction, also known as the action potential of the muscle cells. The movement of the muscles is triggered by neurons in the cortex sending signals to the brainstem (where certain muscle patterns are stored), which then sends an electrical and chemical signal to nerves in the arm, instructing it to bend.

In the Sackler Educational Laboratory, there were five dedicated stations where visitors learned more about the five classic senses: sight, smell, touch, taste, and hearing.

At the taste station, visitors tasted a green and a pink liquid and described which one was sweeter. The correct answer was that they tasted the same, but participants learned that our “sensory priming” might lead us to think that the pink drink tastes sweeter, based on learned perceptions of different colors and how things typically taste. Green foods are usually more bitter (like a green smoothie) and pink foods usually taste sweet (like candy or icing).

At the hearing station, visitors learned that being able to reproduce sounds accurately is a marker of intelligence and complex language capabilities in the brain. A person’s hearing is uniquely adapted to hearing certain sounds and combinations of sounds.

A common theme among the five senses stations was that our sensory perception is equally affected by objective perception and our social and cultural assumptions of how things should look, taste, hear, feel, and smell. Our behavior is altered based on whether we perceive a smell to be pleasant, whether we believe a color is pretty, or if we think a sound is harmonious or discordant. At the smell station, for example, staff told visitors that we acclimate to certain smells and will essentially learn to ignore that smell if it interferes with other tasks. Before modern sanitation, this ability came in handy, in particular to places like New York City, since crowded city streets could smell horrible.

Back in the main hall, there were presentations by researchers throughout the night. During one presentation, Columbia University researcher Bianca Jones Marlin, Ph.D., spoke about the role of the neurotransmitter oxytocin in mediating motherly behavior. According to Marlin, “senses evoke emotion,” but so do chemicals in the brain, including oxytocin. To illustrate this, Marlin gave the example of a mother rat who fetches a pup that is crying and in distress. The emotion experienced by the mother, and to what degree, can be controlled by the exposure of certain areas of the brain to oxytocin, primarily the posterior pituitary gland, she said. When the brain of a female rat who has not had pups is exposed to oxytocin, she will retrieve a pup in distress very similarly to the pup’s own mother. Without artificial exposure to oxytocin however, she will largely ignore the pup. This rat study raises question about how our behavior and senses are mediated by levels of neurotransmitters in the brain, she explained.

Brain Awareness Week is over, but we have more coverage on the way! Stay tuned to our blog for these stories. To learn more about the senses and the brain, check out our senses fact sheets.