Back to Parent Page
HomeCerebrumBrain Trees 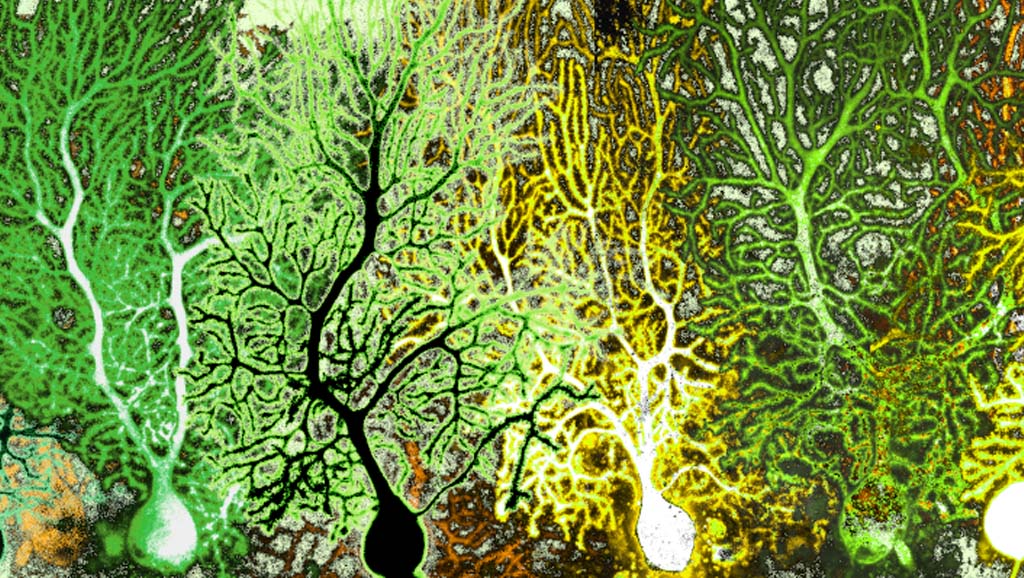 “Vima” — Purkinje cells are among the most highly branched neurons in the brain, making them resemble trees. Artist Dana Simmons colloquially refers to Purkinje cells as “the microscopic trees inside the brain.” She reflects this in Vima, where she used her micrographs of Purkinje cells to build a burgeoning forest.

We have billions of neurons floating around in our noggins but—like snowflakes—no two look exactly alike. Dana Simmons, a neuroscientist who studied how autism affects the brain, created the following works of art from the beauty she saw through her use of microscopy.

Purkinje cells are a type of neuron that resides in an area called the cerebellum, a region in the back of the brain that controls movement, posture, and balance. “In this microscopic world, I saw something strikingly familiar—a cell with dozens of branches that made it look like the trees outside my window,” says Simmons. “I found that this branching pattern, which I call the ‘Purkinje Pattern,’ is present all throughout nature on both microscopic and macroscopic scales.”

Simmons, who received her Ph.D. in neurobiology in 2018 from the University of Chicago and created her work as a researcher there, points out that Purkinje cells are unusual neurons because they have many more branches (called dendrites) than typical neurons. These branches collect information from many different inputs.

“The way I got all of the colors is through patching the cell, which means attaching a small glass tube to the cell body,” she explains. “Think of it like sticking a straw into a tennis ball and then flowing fluorescent dye through the straw. It diffuses through the branches in about 45 minutes. The dyes indicate the cell’s activity, and they tell us how one neuron communicates with the surrounding neurons.”

Some of her other artwork focuses on the tiny knob-like spines that dot dendrites like leaves on a tree, which are the molecular sites of learning and memory. “We wanted to see how communication between neurons, taking place at these spines, differed in autism,” says Simmons, adding that, in her artwork, she was influenced by her mother
(an art teacher) and her grandfather (an art director and painter). Two of her other major influences are Andy Warhol, known for using everyday figures to create Pop art, and Santiago Ramón y Cajal, an early 20th century Spanish scientist who created drawings of cellular neuroanatomy.

“My goal is to inspire curiosity and promote enthusiasm for science,” says Simmons, who is today a health science communicator and recently moved to Washington, D.C. “I’m really excited about the possibilities for analytical people to think more creatively, and for more creative people to start thinking more analytically. We can all learn a lot from each other.”