Back to Parent Page
HomeArticlesBehind the Taste of Bitter and Sweet 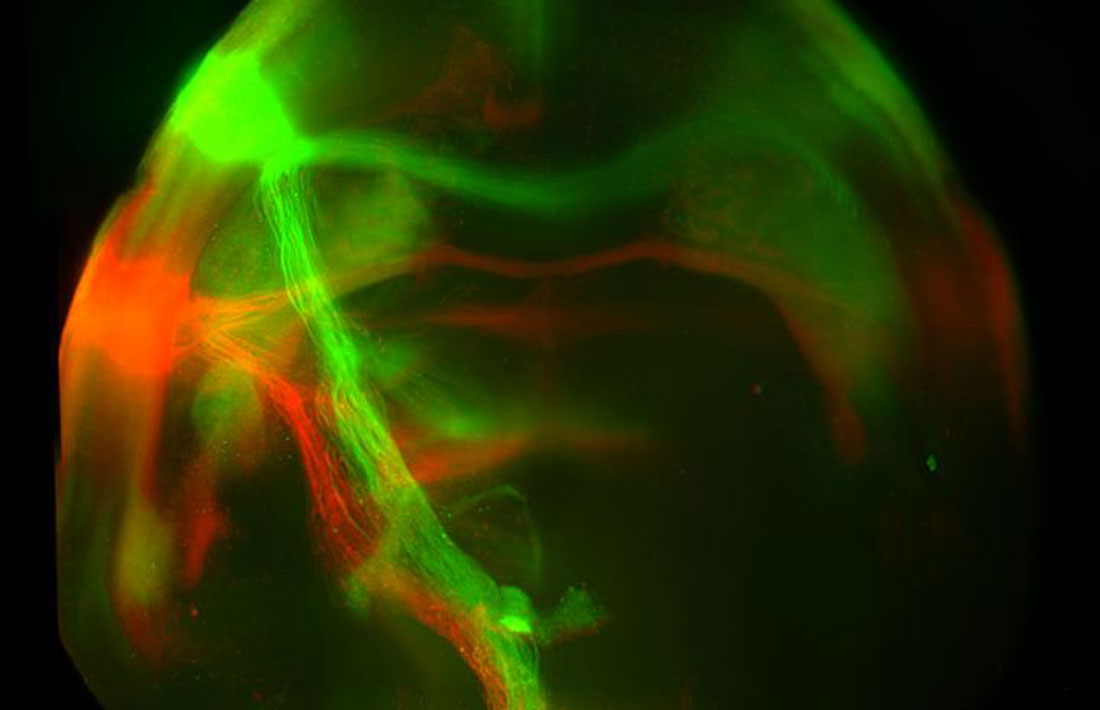 Neural projections from the sweet (green) and bitter (red) cortex terminate at distinct targets in the amygdala in the brains of mice. Image by Li Wang/Zuker Lab/Columbia's Zuckerman Institute

In the past decade, there has been a lot of research looking at how the brain modulates feeding behavior. These studies have focused on hormones like ghrelin and leptin, highlighting how the brain signals to an animal that it feels full and should stop eating (See “New Method of Neural Signaling May Help Explain Obesity”). But what many of these studies don’t take into account are the emotional feelings we often have while eating. Why, when faced with an enticing piece of chocolate cake or a party-sized bag of Doritos, are we so inclined to keep eating even after we feel full, even painfully so? Researchers at Columbia University’s Zuckerman Institute have found they can turn off the pleasurable feelings associated with sweet foods in mice by manipulating a specific group of neurons in the amygdala, the part of the brain responsible for emotional salience; this dissociation may help us better understand human feeding behaviors.

Understanding the complexities of taste

In the past twenty years, we have learned a lot about how taste buds signal to taste receptor cells that are selectively tuned to distinct flavors: sweet, salty, sour, bitter, and umami (or “pleasurable savory”), says Nicholas Ryba, head of the Laboratory of Oral Sensory Biology at the National Institute of Dental and Craniofacial Research (NIDCR).

“There’s a lot of great work that now tells us how animals detect these sensory cues,” he says. “But what’s missing is how those sensations are interpreted in the brain. Taste is an interesting sense in that it clearly evolved in order for animals to evaluate the food they were in the process of eating. Rather than make a complicated decision, taste offers animals kind of a binary choice: to swallow what they are eating or to spit it out. This is a sensory quality that is obviously used to help us learn about different food sources and what we should eat.”

In a group of previous studies, Ryba, Charles Zuker, a biochemist at Zuckerman Institute, and their colleagues discovered that the different taste receptor cells send signals to different regions of the brain both to identify the category of the taste and to trigger associated behaviors. The researchers found that they could manipulate those experiences by targeting different groupings of taste-specific neurons.

“If you look at the brain of a mouse, it turns out that bitter and sweet tastes are represented in taste cortex in their own specific cortical fields of neurons,” he says. “If you activate those cortical fields in a mouse that is awake and moving, the mouse can perceive the taste even though it’s getting nothing but water. In essence, we could evoke the full sensory experience of the taste by activating a group of neurons—evoking a full, gagging reflex when we activated the bitter cells, for example, even though the mouse had nothing to drink but some water.”

Zuker argues these results show that taste has two distinctive features: its identity and its hedonic value, or the subjective feelings associated with that taste.

“Sweet has a distinctive taste. Even if I don’t like sweet, I can still identify it. But to most people, it also means something—good, attractive, addictive, something you crave,” he says. “These two features of taste are imposed by distinct sets of neurons. So we asked ourselves, if we can identify where the taste signal goes, can we can identify where in the brain a taste imposes this kind of meaning on this sensory input?”

Zuker and colleagues knew that taste-specific groups of neurons projected to many different areas of the brain, but one area in particular piqued their interest: the amygdala.

“The amygdala is considered to be a key center for emotion in the brain—so we thought it might be the place where taste is awarded its hedonic value,” he says.

To test the idea, the researchers used optogenetic techniques in mice to turn on and off connections from sweet and bitter areas of taste cortex to corresponding pools of neurons in the amygdala. When they turned on the sweet or bitter connections, the animals behaved as if they were experiencing that taste, even if they were only drinking water. The scientists could even manipulate these pathways so the animals would experience bitter tastes as attractive and sweet ones as aversive. But when the they turned off these pathways, they found that the animals could still recognize the identity of a bitter or sweet taste but no longer showed the pleasurable or aversive reactions to experiencing that taste. The findings were published in the May 30 issue of Nature.

“I think this is the part of the circuit that makes sugar so extraordinarily addictive and attractive,” says Zuker. “The identity of a taste and what you feel when you eat it are two distinct things. And the amygdala is adding meaning to the sensory input, which has the power to change how an animal behaves.”

This dissociation between taste and feeling may explain why humans continue to eat once we should be sated, as well as our predilection for sweet, unhealthy foods: The hedonic valence helps to drive the eating behaviors. These findings might also offer clues into how some people develop eating disorders like anorexia. Guido Frank, a psychiatrist at the University of Colorado Anschutz Medical Campus who studies the neurobiological underpinnings of eating disorders, says this is and “extremely well done and interesting” study—and may offer clinicians new ways to consider these complex disorders.

“It’s possible that food restriction sensitives this system, and then whatever value is transmitted from the taste receptors to the amygdala is magnified, driving a fear of weight gain,” he says. “So perhaps it is a more unconscious process that ultimately drives a more conscious process that makes someone with one of these disorders afraid of gaining weight.”

Zuker, however, is more interested in following these pools of cells to understanding how tastes make memories. He plans to follow this study by looking at other projections from the taste cortex to areas of the brain involved with learning and memory.

“Taste has an extraordinarily powerful capacity to evoke and make strong memories. You eat something one time that you despised and you will never forget it. Why is that?” he says. “We want to use the sense of taste as a window into the brain, to help us understand how the brain transforms sensory input into a percept and then a behavior. To understand we need to look at these sensory inputs that best afford us the opportunity to dissect the nodes of brain activity to figure out how it all comes together.”