Back to Parent Page
HomeCerebrumBeauty and the Brain 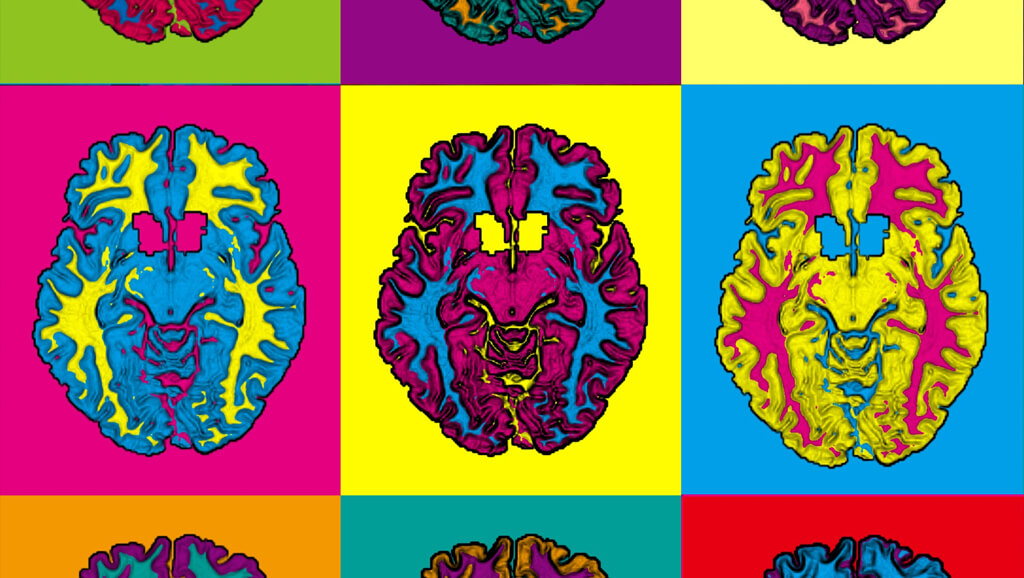 In “Pop Brain,” infantile features of baby portraits evoke neural activation in the striatum, which is a critical component of the brain's reward system. Collaborating to create the work were An-Li Wang, assistant professor of psychiatry, and physician assistant Chris Kudrich.

Profound and unfathomable imagery is often found in places people never go: millions of miles away in space or thousands of feet beneath the sea, for example. One place where photographer Veronica Szarejko never expected to find immense beauty was through a peek at the brain using a transmission electron microscope. “I felt as if I had been transported back to the darkroom during a time when I was printing my own silver gelatin images for exhibitions,” she recalls. “The depth and beauty of these black and white images were stunning, and I felt an immediate attachment to them.”

Szarejko, who in 2014 was helping to create presentations and posters for scientific conferences for the Nash Family Department of Neuroscience at the Icahn School of Medicine at Mount Sinai in New York City, was inspired to conceive The Art of the Brain, an exhibition of more than 70 photographs, drawings, paintings, videos, and sculptures celebrating the beauty of the brain as seen through the eyes of researchers and medical illustrators at the school’s Friedman Brain Institute.

Since the exhibition was launched in 2014 in conjunction with the annual Brain Awareness Week campaign in March, submissions have grown each year. This year—in which Art of the Brain was presented in a 3-D, virtual space due to pandemic concerns—contributions came from members of ten different departments, including neurosurgery, psychiatry, genetics, and genomic sciences.

Szarejko told the journal The Lancet that the exhibition’s objective is twofold: “to showcase the range of inventive work created and inspired by research undertaken at Mount Sinai; and subsequently to extol the high-tech environment at which avant-garde science research is progressing and developing novel treatments for neurological disorders.” Represented are advanced technologies, such as electron microscopy, laser-based cellular imaging, and confocal microscopy, and techniques including 3-D modeling, immunofluorescent staining, diffusion tractography, and fluorescence microscopy.

All of the artwork was created by institute members, mostly in the workplace. The only criterion is that the piece must relate to the brain or nervous system. Available for purchase, proceeds for the individual pieces go towards the institute’s Diversity in Neuroscience (DiverseBrains) initiative. This year, three modest cash awards were presented; a new honor consisted of one image being selected for the cover of the journal Biological Psychiatry.

“Our goal is to not only highlight these amazing images, but for people to learn about the really exciting work being done by institute researchers on advancing our understanding of brain and spinal cord disorders,” says project manager and curator Szarejko. She hopes to add graphic novels as murals and performance art to the mix when the exhibition returns to its gallery space at the institute at the start of Brain Awareness Week next year.

This article first appeared in the Summer 2021 issue of our Cerebrum magazine. Click the cover for the full e-magazine.