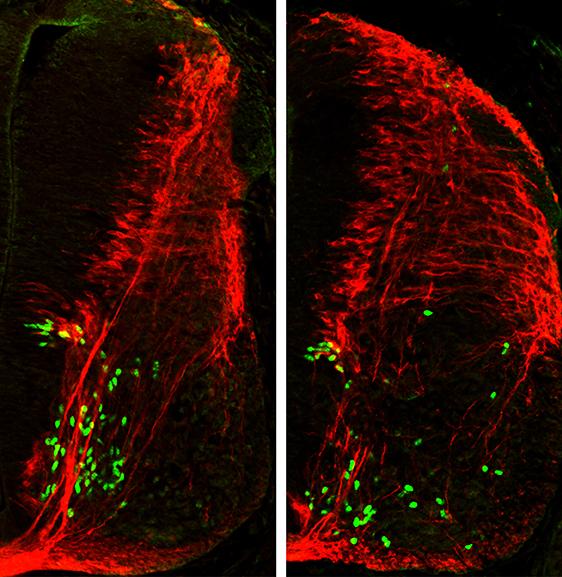 Axons in red and neuronal cell bodies in green show cell bodies following the red axons in the normal embryo (left) and when the axons are misplaced in the right image the cell bodies move to the wrong place too. Photo: Christophe Laumonnerie

Approximately three weeks after fertilization, an embryo’s first nerve cells start to form—creating the foundation for the entire human nervous system. Neural development is complex and intricate, requiring the migration of important cells to specific locations. And when the nerve cells don’t end up in the right spots during embryogenesis, it can result in debilitating neurodevelopmental disorders. New research from Sweden’s Umeå University has found that axons help guide this critical cell body positioning as the nervous system is assembled. And that understanding may help scientists prevent neurodevelopmental problems in the future.

Judy Liu, a researcher at the Children’s Research Institute in Washington, DC, studies the intracellular mechanisms of neuronal migration, or the cellular positioning that occurs during fetal brain development. She says that this migration is critical to healthy brain function—putting cells in the proper place so that the right types of cells are communicating with one another, setting down the tracks for critical signaling networks.

“If migration doesn’t happen in the right way, you have a problem with the correct circuits forming. For neural circuitry to form correctly, your neurons have to be in the right place and they have to be able to find their targets,” she says. “If one connection between a single neuron and its target doesn’t form, an organism is probably going to be fine. They might be a little quirky, but you won’t have a problem on a global scale. But when migration really goes awry, neural information won’t be transmitted in the right way. And that’s when you see really profound problems.”

Some of those profound problems include lissencephaly, a rare disorder where the brain fails to develop its telltale folds and grooves; and Kallmann syndrome, a condition that disrupts puberty because the right neurons do not migrate to the hypothalamus. Migration problems have also been linked to epilepsies and severe intellectual disabilities, and such migratory issues might lead to conditions like dyslexia, and autism spectrum disorders, too.

“If we understand how this migration happens, how the structure of the brain is set up, and how all of these different developmental stages interact, we can hopefully gain a bigger understanding of how to make a fully functional brain,” says Liu. “And we need that understanding so we can see how development really relates to disease and behavior.”

But what directs the cells into their proper places?  Christophe Laumonnerie, formerly a member of Sara Wilson’s laboratory at Umeå University and now a post-doctoral fellow at St. Jude’s Hospital, says that, in the midst of working on other studies, he and Wilson observed an interesting phenomenon:  Some axons had formed an interesting pattern—like corridors—as other cells were migrating in the spinal column.

“In looking at these cells, I realized there was a huge disarticulation of the axons in this situation—and it was very consistent. These neurons were interacting with the axons and that helped them get to where they needed to go,” he says. “And so it made sense to us that maybe the axons were guiding the cells in their migration.”

To test the idea, Laumonnerie, Wilson, and colleagues used genetic methods to manipulate the neurons—to disrupt the “axonal corridors,” or projection patterns that Laumonnerie observed as migration occurred in spinal cord neurons. They found, using several different genetic modifications, that when they changed those corridors, migration did not follow normal patterns. This, Wilson argues, suggests that axons are acting as a guide, helping direct neurons into the right places by providing both direction and borders. The results were published on May 11, 2015, in Nature Communications.

Getting development back on track

The axons are not the only factor influencing neuronal migration, Wilson says. She cites other studies that show the importance of glial cells to proper development as well. If we can better understand how all these different cells are interacting during brain development, we might better predict what causes the structural differences seen in different neurodevelopment disorders.

“The nervous system is extremely complicated. So many different things are happening—and happening all at once—in order to get it to develop properly,” she says. “This study offers a new aspect of how that happens. And if we can piece that information with other studies, we can hopefully learn important information about what is going wrong in different neurodevelopmental diseases.”

Liu agrees. But she says Wilson’s findings have added an important new chapter into our understanding of brain development.

“This study shows that axons have to be in the right place before these different populations of neurons can migrate in. It’s something we hadn’t appreciated before,” she says. “And now that we can very specifically disrupt things at certain times and in certain places, we can address some pretty complex questions about brain development in a sophisticated way. We’re learning a lot. It’s a really good time to be a scientist—especially if you’re studying neuroscience and brain development.”