Back to Parent Page
HomeArticles2018 Brain Day at NYU 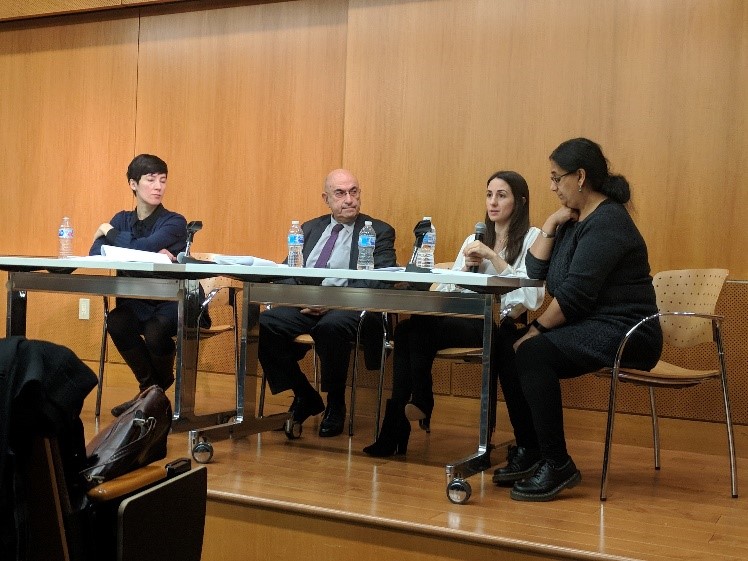 New York University’s Brain Day at NYU Langone Health took place on Tuesday, March 13th, as part of BraiNY and the Dana Foundation’s long-standing collaboration to celebrate Brain Awareness Week! The event included a Brain Fair in the Farkas breezeway, where booths provided information on the brain, displayed models of brains to examine, and, of course, presented some real brains to hold, too. For those looking for a challenge, there was “Brain Jeopardy” for visitors to test their knowledge of the brain. This year, there was even a 3-D printer creating model of brain cells, including a Purkinje cell, a type of neuron found in the cerebral cortex that releases a neurotransmitter called GABA (gamma-aminobutyric acid)! Dana publications and materials were handed out to attendees, which included many high school students.

In a separate room, NYU’s Center for Cognitive Neurology presented a Successful Aging & Your Brain (SA&YB) program in partnership with the Dana Foundation. Trainer Linda Meyer, kicked off the session with a brain warm-up to get everyone’s mind and body ready for the discussion, starting with a relaxing, meditative song and then transitioning to an upbeat pop song. She asked the audience to lift opposite limbs (right arm, left leg, and vice versa), do some steps and swinging side-to-side, and to hug oneself in an expression of self-love. This was followed by a panel discussion on how the brain works, memory, and brain diseases and disorders (including Alzheimer’s disease). Moderated by Jyoti Patel, Ph.D., panel members included Research Scientist Andreia Godinho De Andrade, Ph.D.; Neurology Professor Sonja Blum, M.D., Ph.D.; and Clinical Professor Elkhonon Goldberg, Ph.D.

Godinho De Andrade discussed the cognitive benefits of a good night’s sleep, which was fitting for the simultaneous Sleep Awareness Week (March 11-17). Researchers have found remarkable evidence of toxic chemicals and byproducts that accumulate in the brain during the day, which are then cleared out during sleep, she said. She also told the audience not feeling tired does not necessarily mean that an individual is not sleep-deprived, and stressed that everyone should get at least seven hours of sleep a night to keep their brains healthy and practice good sleep hygiene.

Bloom emphasized the importance of exercise and offered a unique perspective on how to determine how much and what type of workout is adequate. Studies have shown that elevating one’s heart rate is the best way to improve vascular and heart health, as well as brain health. She recommended elevating the heart rate for 150 minutes (2.5 hours) every week, but pointed out that there is no standard heart rate we should strive for since it varies from person to person based on age, baseline heart rate, pre-existing health conditions, and medications. To determine an ideal heart rate to reach during exercise, Bloom advised asking a doctor and then using a monitor to see which activities elevate the heart rate to that ideal range.

The program wrapped up with panelists focusing on the four factors of successful aging and a brain-healthy life: staying physically active, reducing vascular risk factors, managing diseases and drugs that may impair brain function, and keeping the brain lively with social engagement and intellectual activity. It was then followed by a Q&A with the audience.